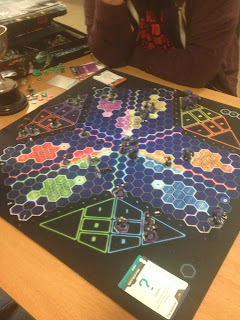 It's a measure of how flexible and quick Dreadball is that we managed to almost get three games of the multi-player variant with four players completed in a club session on Monday. It's also somewhat surprising, given my usual track record and appalling history with dice rolling, that I won two of them!

In case you've not come across it before, the picture on the right shows you the pitch for Ultimate Dreadball - each 'leg' of the board can hold one or two teams, so you can have between 3 and 6 players. There's some subtle tuning to the rules from two player Dreadball, partly to speed up play and partly to randomise play order within a turn, but in general it's pretty similar, and the tactics that work in the regular game seem to work pretty OK in Ultimate.

Once again, I profited a fair amount from not all my opponents actually paying too much attention to the ball. Reuben's human team, probably my key opponent most of the time, was the exception to this, and he won the game I didn't. I also got a chance to make a couple of mistakes before it matters in our club league (like, forgetting that in Dreadball facing matters, and throwing a pass at the back of one of my Jacks' head!)