Labels: game aids, WAB
Just knocked together a 'Numbers' (Apple's spreadsheet in iWork) document to manage WAB army lists. It uses a few tricks that won't translate to Excel (purely for cosmetic purposes), and needs a bit of cleaning up and documentation, but I'm quite pleased with it.

Also reveals that I might have been 40 points over last night at the club, but hey - we got trounced. Battle report to follow when I get the pics off the iPhone.
Posted by Mike Whitaker at 20:52 No comments:

Labels: battle report, blitzkrieg commander, club, WW2
Well, this week it was Blitzkrieg Commander: a multiplayer game, where a force of Brits commanded by Phil, assisted by yours truly and Richard, took on a well-entrenched bunch of Germans, Somewhere In North West Europe.

I got the right flank, with two tank units and a load of infantry riding aboard, with a brief to clear out the woods and the village ahead. This was made a little harder by the fact that the off-road terrain was ruled to be hard going for tanks, restricting them to a quarter move....

So off down the road we went. Successful command roll, then another, disembark the riding infantry.... and an 88 opened up from somewhere beyond the village and suppressed one of the lead tanks, blocking the road. And from there on it went downhill. I had, basically, the most appalling dice luck ever: in the ensuing half dozen turns, I made a grand total of something like 4 out of 15 command rolls on an 8 or less. An 8 or less is pretty close to 3 chances in 4...

So, needless to say, the upshot of that was that the right flank went pretty much nowhere for the whole game. And we lost.

To be fair - one well-sited 88 holding up a whole force is not exactly unauthentic. And I did roll really really crap dice.
Posted by Mike Whitaker at 19:32 No comments:

Labels: ancients, battle report, club, roman, WAB
WAB last night - after my somewhat rushed efforts to get a painted army, it turned out that Grahame hadn't seen my message, so had only brought 1000 points. So we settled on the 'Attack on the Camp' scenario from the rulebook, with my forces attacking. Grahame deployed with two cohorts either side of the main gate, flanked on either side by auxillae, and Carl and I sent our two cohorts to face his, and the cavalry swept round one flank. It all went, as they say, rather well... The cavalry exchanged javelins with the auxillae, then went in for the kill - result, a complete stand-off! No casualties on either side in the first round, helped by the cavalry rolling four 5's to save against the four hits the auxlliaries inflicted. Which meant they had momentum, due to the fact that they had a musician....


Meanwhile, on the other flank, two small units of defending auxillae jumped the wall to take on the light archers - that started well, as Carl's opening volley caused one of them to decide it was too hot for them, and retired to consider their options.
Round two on the left - a win for the cavalry, and the auxillae failed their break test and ran, allowing the cavalry to follow through into the flank of one of the legionary cohorts. The first round was fairly inconclusive, but around then our two cohorts made it to the palisade, and battle was joined in earnest.
Two rounds of that, and one of Grahame's cohorts broke: at that point, we decided a victory for the attackers, with the (apparently well-hard) cavalry inside the camp, was pretty much a matter of time. As it was only 9pm, we set up for a second skirmish, using 'The Ambush'.  I'm not 100% convinced of the setup rules for this one - basically it seems to allow the defender to set up 12" from safety, with the attacker at least 18" away. Had we not had the cavalry, it would have been pretty much a non-event.

Anyhow - the cavalry fast-marched to intercept the lead cohort, while the two cohorts of somewhat asthmatic legionaries (heavy armour, so 3" move) did their level best to fast march in pursuit. Had they got there a bit faster, things would have been rather different - as it was, by the time they were in position to charge home on the opposition, the cavalry (after another ridiculous save of 5 hits, this time by Carl) had been routed, and the followup move took the cohorts pretty much out of reach. 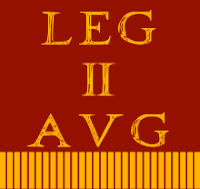 All in all, a good fun evening, though my cavalry seem to have acquired a reputation for sneaking in kevlar under their chainmail!

In case anyone's wondering about the standard on one of the two legions - the Warlord standard broke several times, the last time while it was being varnished outside, so I gave up, edited and printed off a banner and attached it to a shaft and crosspiece made of florists wire, superglued into the drilled-out hand/shaft. Looked pretty good, considering. (The font is 'SPQR', by the way.)
Posted by Mike Whitaker at 12:19 1 comment:

Labels: basing, dip, painting, roman
Everything's painted, dipped, had the Tamiya Dark Earth and the moorland scatter applied. Just waiting on the first round of dilute PVA drying before I apply static grass and Army Painter Anti-Shine spray, which latter might wait till the morning.

Photos to follow: I should note I don't claim to be a good painter by any stretch of the imagination - not seeing in 3D doesn't help - but they pass the 'massed ranks at 2 feet away' test, which is fine by me.

Next up for this army will probably be a unit of Warlord auxiliary infantry - fortunately, I have a good two weeks for those.
Posted by Mike Whitaker at 21:33 1 comment:

Labels: ancients, roman, stupid Roman tricks, WAB
It just occurred to me that my opponent on Monday can field well over 2000 points, so I may as well pad mine with all the good options. So:

As I just remarked in conversation to a friend, isn't it amusing how we set limits for ourselves without thinking why, sometimes?
Posted by Mike Whitaker at 08:04 No comments:

Labels: painting, roman
So.
And I'm just not going to run out of bases: the aquilifier will use my last 20mm square.
Posted by Mike Whitaker at 23:25 No comments:

Labels: painting, roman
Well, we're making progress. 12 auxiliary cavalry assembled and primed, and the 18 primed legionaries are blocked in all bar the leather and wood. Hopefully, I can get the latter to the dip stage by the end of tomorrow.

Sunday looks like being an afternoon spent basing :D
Posted by Mike Whitaker at 23:35 2 comments:

Labels: battle report, club, dark ages, LotR, pig wars, skirmish
Having flipped another coat of Army Painter anti-shine on the Rohirrim at the last minute (literally, it was just about dry when I boxed the figures up for transport), I made it, somewhat late, to the club to take on Carl's Norman's at the rather fun Pig Wars Dark Ages skirmish rules.

We set up on opposite sides of a village, each with 5 cavalry, 12 spearmen and three bowmen. Carl set up clustered in the middle, whereas I sent four spearman up the right flank and through the village with the bowmen. Things started badly - we converged just outside the village gates, and I declared a charge with my cavalry on his spearmen. Distance, no more than 14". Charge move for the cavalry? 12" + d6. And I rolled a 1.

Result, rather unpleasantly, was me getting charged in the (fortunately shielded) flank by his cavalry, and in the front by his spearmen. The resulting dustup consumed most of the battle from there on, to be honest. We both lost standards early on, and both passed morale checks (Pig Wars uses a deck of cards, not dice). I really thought I was done for, losing three horsemen early, but my leader (aka Axe Bloke), proceeded to stand firm when surrounded by Normans and lay waste to all about him in a manner which will without a doubt go down in the sagas. Were I better gifted in alliterative verse, I'd give it a go!

I was cursing my decision to send four spearmen up the flank, as I was sure the cavalry would be toast by then, but, as you can see from the picture, they and the bowmen did eventually make it across the village square in time to lend a hand. For a while, it looked like my RoSaxons would actually carry the day, but my pack of cards was stacked against me, and his leader was lucky enough to survive and knock the final wound off Axe Bloke. After that, it was just a mop up job for Carl.

So, thoughts on Pigs Wars?

Great fun, very fast paced. The game mechanic of using the cards works really well. Technically, you can get away with odd base sizes (like mine on 25mm and 40mm rounds) as figures meet 1 on 1, but WAB-style basing is probably saner all things considered. I wonder if archery possibly isn't deadly enough. There are no real command rules (which I'm starting to enjoy in games like Blitzkrieg Commander and Prinicples of War), and not enough morale checks to prevent the other issue - it's lethal. In a campaign context, you'd have to roll for casualties to see if they were dead or incapacitated, as between Carl and I we had 5 figures left out of 40 at the end of the game.

All in all, though? I had a ball.... Big thanks to Andy from the club for introducing us to the rules.
Posted by Mike Whitaker at 23:24 3 comments:

That sense of 'aaaaaaargh'!

Lessee, what's in the boxes out there? Some cavalry would be good.

which leaves me
or I could add another cavalryman, ditch the aquilifer and assemble another bunch of the Wargames Factory Numidians as allied archers
Guess I better get cracking then! If I can paint the III cohort and assemble the auxilliaries by the end of tonight, I should be OK, as (once again) everything needs to be painted and dipped by end of Friday to dry in time. It does, though, from recent experience, look as though brushed dip dries in 24 hours rather than 36, so I may have some slack. Which is good, 'cause I'm out on Friday night!
Posted by Mike Whitaker at 10:52 No comments: