Labels: dip, painting
Well, that was an interesting experience.

First time with Army Painter Quick Shade - definitely not what I expected. First reaction, after shaking the dip off the recommended half dozen or so times, is definitely "Oh my God, I've ruined it." It is, though, quite surprising how fast it changes (from thick, brown, figure-ruining gloop) to something looking surprisingly good.

For future reference (note to self and anyone else reading it):

Posted by Mike Whitaker at 16:02 No comments:

Labels: napoleonics, painting, roman
I have enough EIR to paint... (another 24 WF Roman Auxilliary cavalry arriving tomorrow - seem to be the last in the UK!)

But the Victrix and Perry ranges just look so nice, and the Black Powder rules are getting good reviews...

Where did my copy of Pericoli's "The Armies At Waterloo" get to?
Posted by Mike Whitaker at 23:04 No comments: 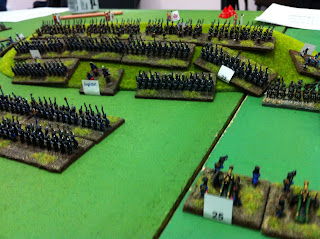 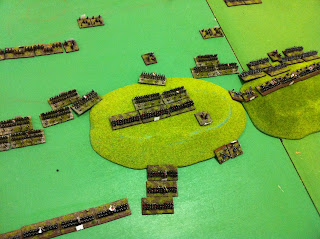 But ultimately? They felt right. Units did what I expected they would do in a given situation, and the only flaws in the game were really due to R and I not fully absorbing the rules beforehand. And we didn't really need that loitering unit of light dragoons, as it turned out. :D
Posted by Mike Whitaker at 12:18 No comments:

28mmm Early Imperial Roman army for WAB
I seem to have been collecting figures of late, starting with a Warlord Games Imperial Roman Starter Army and adding a bunch of Wargames Factory stuff off eBay. Painting has started! The end line up (which is an insane amount of points I'll never field all at once, I guess), will be....

28mm Lord of the Rings troops
These are my 'break from the Romans' painting job. Foolishly, I bought the whole of the "Battlegames in MiddleEarth" partwork, so I have loads of sprues of various things to paint. First off, enough Rohirrim to pass as a Dark Ages warband for a club session, then we'll see what I fancy, I guess.
Posted by Mike Whitaker at 13:32 No comments:

By way of introduction

I'm Mike Whitaker, and I'm a member of Peterborough Wargames Club. My primary leaning is towards historical gaming, with a preference for WWII, Ancients, and Napoleonics, although I confess to a fondness for the Lord Of The Rings game.

Like, I suspect, a good few people, I gave up the hobby for a good while (with a foray into RPGs instead, in my case) after school. My school had a thriving wargames club that played predominantly WWII (to a set of house rules that I still have a copy of somewhere, with air rules added by me), a couple of different Napoleonics sets (mostly the Airfix ones by Bruce Quarrie), and the infamous 'cardboard ancients' - WRG 6th or 7th ed with cardboard counters 'cause none of us could afford figures.

Came back to the hobby thanks to our local assistant vicar, who introduced me to the club via their Wings of War campaign, and have rediscovered how much fun it is.
Posted by Mike Whitaker at 13:19 No comments: