That sense of 'done'.

Labels: basing, LotR, painting
It's funny how much certain steps of painting a figure bring it alive - hands and face is one for me, for example - I've always found that, even back when I was painting figures in ones and twos for D&D.

But now I've taken to basing figures, the one that for some reason puts that stamp of 'done' on it is the band of brown round the edge of the base: partly because the base is till then usually still mostly black or the primer colour, and it does set off the scatter and static grass.

So - I can happily report that the 20 Rohirrim (5 mounted, 12 plastic spear/sword/axe, and the Gamling, Hama and Eowyn hero metals) are dipped, based, varnished and ready for tonight's go at Pig Wars, along with the 8 bowmen I painted last month.
Posted by Mike Whitaker at 08:45 2 comments: 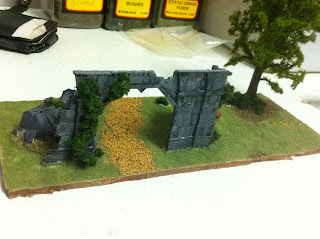 A bit of foamboard, part of the LotR plastic ruins set, a Gaugemaster beech tree, and a bunch of static grass and other scatter materials. Quite pleased with how it came out.
Posted by Mike Whitaker at 19:51 No comments:

I guess I better get my skates on...

Labels: club, dip, followers, LotR, painting
I need the rest of the Rohirrim-masquerading-as-Saxons painted by Monday for a club Pig Wars game....

They're primed, and started. And I'm out tomorrow night.
So. To be ready on Monday, they need to be based and varnished Sunday (better pray it doesn't rain for long enough for me to get outside and spray!), and therefore Quick-Shaded at the latest Sat am or Friday night...

Which means I need to make a pretty decent stab at finishing the blocking of colours by the end of tonight.
Eep.

In other news - I have my first follower (which is good, cause I was starting to worry if Google Friend Connect was broken!). Hi to Paul from the excellent Paul's Bods, which is giving me serious nostalgia trips on a regular basis.
Posted by Mike Whitaker at 17:06 1 comment:

Labels: ancients, battle report, club, roman, WAB
Warhammer Ancient Battles this week - Grahame's Romans (co-commanded by him and me) against a mixed force of barbarians. Essentially, four cohorts of legionaries, some auxilliary archers, some javelin armed lights, more auxilliaries with spears, and a smattering of cavalry. Nice balanced army.

Our left flank turned into a cavalry scrap, which basically resulted in a Barbarian sandwich at one point (even Auxilliary light cavalry hurts when it hits you in the rear) and a lot of running away.

The centre and right develoved into an archery duel, and an exercise in over-caution: my archers got shot to bits over four or five turns, and a unit of Auxilla with heavy thrusting spears passed an equivalent amount of time intimidating a bunch of barbarian light cavalry. The barbarian warbands spent that time making faces at our four legions, advancing on failed warband checks and then backing off again.

Fine as it went, but a bit out of character for both the ravening barbarian hordes and the indomitable legionaries. I know the auxillae are there to do the bleeding for the guys in lorica, but...
Posted by Mike Whitaker at 17:09 2 comments:

Labels: club
...to Grahame and Chris, and everyone who went to Hammerhead last week to help with our "Napoleonic Invasion of Britain by Balloon' participation game. 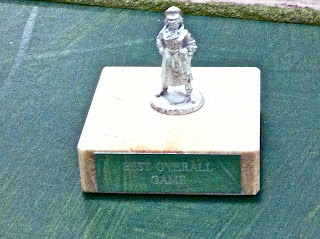 By all acccounts, it was a hit. Not least because the club came away with this.

Some shots of the actual game here. The guys at Roll With It also have a couple of nice photos.
Posted by Mike Whitaker at 23:07 No comments:

Labels: basing, dip, LotR, painting, roman
Really wasn't totally happy with the Balearics after I'd dipped (well, brushed) them - the dip had pooled in a few places on their tunics that just looked wrong. However, I persevered, cause, frankly, life is too short to repaint everything :D

Some priming experiments - I undercoated a bunch more Rohirrim, this time in green to save time on their cloaks, and their horses in black. We'll see how that goes this weekend.

On to basing the Balearics. I think I have a process now, which seems to work. First off, apply a layer of Tamiya dark earth diorama paint. It's a little bit pricy, but a £8 jar claims to cover a B4 sheet (which works out at around 200 or so 20mm square bases. Basically, it has resin particles in it, and can be formed on a base - you apply it with a spatula, or in my case the end of a coffee stirrer liberated from work.

On top of that, once it's dry, I brush on some neat PVA, dip the base in Javis Moorland Scatter and shake off immediately - I don't mind if it doesn't stick everywhere, since the dark earth underneath looks just fine.

Finally, I let that dry, dab on a few blotches more of PVA, and apply some static grass (don't ask me whose, I think it was Hornby!) using a Noch puffer bottle from Gaugemaster. Job done, and now to apply the (Army Painter) matt varnish...

Which was a bit of an eyeopener - the effect wasn't as obvious on the Rohan foot I painted the other week, but it really does soften the look of the dip, kill the in-your-face glossiness, and makes me look a half-decent painter. The moral of the Army Painter system really does seem to be to take your courage in both hands and not give up!

Pictures to follow next time: I'll do a step by step of the next batch of Numidians (probably as archers).
Posted by Mike Whitaker at 10:35 No comments:

Sorting out the collection...

Labels: LotR, stash
Took an hour to sort through the Battle Games in Middle Earth figure stash, which is... scary. As far as I'm aware I have the complete set. Considering keeping the Rohan metals (if I can figure out which are which!), the orc and Rohan plastics (half of which I've painted already) and maybe the 3rd age Gondor plastics, and eBay-ing the rest. There's quite a few rarities in there, judging by some eBay prices, so that should raise some funds for ... gee, I dunno. Some Napoleonics....? :)
Posted by Mike Whitaker at 19:26 No comments:

Labels: dip, LotR, painting, roman
I have a bunch of Balearic slingers painted up from the WF Numidians box. This time, I tried applying the dip with a brush, and I'll give it 36 hours or more to dry, If that goes OK, I'll move on to the legionaries.

On the LOTR side, I have 8 Rohirrim done, another 8 undercoated, and a standard bearer - made from a swordsman with a broken sword, with the hand drilled out and a length of florist's wire inserted. We'll see how those go, I guess.
Posted by Mike Whitaker at 17:25 No comments:

No photos, but just for the record, and for any folks not from the club that are going: "The Napoleonic Invasion Of England By Balloon" rocks. I won't spoil things by revealing the details of the game, but expect fun. And outrageous French accents.
Posted by Mike Whitaker at 19:39 No comments:

Cold War Commander - the modern offshoot of Blitzkrieg Commander, which I am really fond of. M and myself, playing the British, took on a smaller Soviet force commanded by S, who was tasked with defending a position.
We divided the British forces, sent a small group (Paras in FV432s, a group of Centurions and the FAO and FAC)  up the left hand road to keep the Russians interested, and the rest (another infantry battalion and the majority of the tanks) up the right.
The left flank did considerably better to start with, taking the hill that overlooked Soviet positions unopposed and sending the Centurions racing round the flank. Usefully, this got the FAO and FAC with really good line of sight, and they began by calling down artillery on the wood containing most of the Soviet infantry defending that flank.
On the right, M had a string of failed command rolls, causing most of the tank crews to, one assumes, sit around and read Playboy while waiting for something more interesting to happen.

Things really started to hot up around turn 4. The FAC called in the Hawker Hunter we had available, and it proceeded, despite incoming AA from a SAM, to pound the living daylights out of the command group atop the central hill (top left, second picture). And then came back for a return visit, leaving about half of that group supressed and all of it damaged.

The FAO called in more artillery on the wood, supported by infantry fire - I would have charged in, but I got overconfident after the second command roll was snake-eyes... and went for a third. Double 6. Command blunder. Artillery target friendly unit nearest original aiming point. Whoops. With 40% of the assaulting troops suppressed, that attack got delayed for a turn.

And then the tankers finally woke up, and proceeded to finish what the Hunter had started. As you can see, there wasn't much left on that hill - in fact, the Russian CO was pretty much it.  Sadly, there we had to call it, but it was a fun exercise, even if we did spent rather too long trying to remember the rules!
Posted by Mike Whitaker at 18:53 No comments: