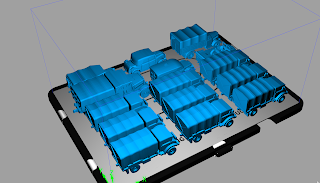 Just about to queue this lot up for a print run. 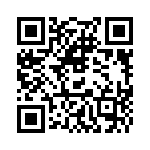 Labels: 15mm, battle report, club, IABSM, iabsm3, too fat lardies, WW2
Another club Monday playing IABSM, this time with Carl, AndyMac and AndyB - we seem to be on a bit of a roll, which is good as it means the rules stay fresh.

As I'm probably writing the scenario up for the Lardies' Xmas Special, if Rich will have it, I'm not going to go into too much detail: apart from that, I was busy playing the Germans, so I didn't get many photos.

In short summary - it's Normandy, on the border between the British and American sectors, and an American company have gone and got themselves trapped (and well beaten up) raiding a German command post. Due to a German counterattack, the Americans can't send help, but (somewhat to their chagrin) the British can.


The counter-attacking Germans are veterans, and well commanded, which makes an interesting distinction from the Americans (well-commanded but short in numbers and ammo) and the British (minimal commanders).

Low spot, from my point of view, were letting the German Top Ace get side on to an unspotted bazooka after his first action, which was probably a major contributor to the Germans not really winning at all.

Also? I must remember that all HE heavier than 2"/50mm mortars auto-pins.

The scenario did, however, seem to work, and we'll try it again in a couple of weeks just to see if it's balanced enough when the German CO isn't being an idiot :D

Posted by Mike Whitaker at 20:22 No comments:

Labels: remembrance
For the Fallen: I know the next verse is the popular one, but I still find this one more moving:


They went with songs to the battle, they were young,
Straight of limb, true of eye, steady and aglow.
They were staunch to the end against odds uncounted,
They fell with their faces to the foe.

In these present times, I'd also add one of my favourite verses from one of Mark Knoplfer's finest, the evocative "Brothers In Arms":

Where do I get my explosion markers? 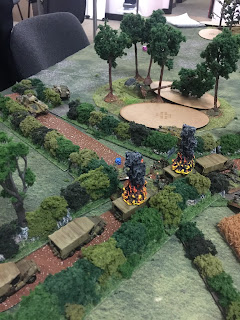 A couple of folks, both online and at the club, asked where I got the explosion markers from.

Well, they're from Small Terrain on eBay - pre-painted and worth it.

I know I could make my own, but frankly, for a tenner?
Posted by Mike Whitaker at 17:21 1 comment:

Labels: 3d printing, battle report, club, IABSM, iabsm3, too fat lardies, WW2
Having printed a positive fleet of US trucks (both WC63s and deuce-and-a-half's), I figured it was time to get them on the table.

Sadly, I've failed to find my partial sheet of Allied stars, and the new delivery from Dom's Decals is still in the post, so they had to go on the table merely painted without decals, but hey....

Ok... so. This was always going to be a bit one-sided, but we figured it would be fun...

Allies (me and TomG):

Germans (AndyMac and Carl):
The deployment rules were:
And off we went.

The Germans went with the top left corner deployment option, allowing them to take advantage of a couple of woods for cover. They also had the considerable advantage of several goes through the (minimal) deck where only the Axis Blinds card came out.[2]

Eventually, at the point the whole convoy was on the table, a Panther appeared down the side road to the left of the convoy, and all hell broke loose.

Two shots, two trucks destroyed, most of the HQ section of the company spilling out onto the road. Fortunately? This included the HQ section's bazookas.

Unfortunately, one of them didn't survive the attack, and the remaining one couldn't shoot for toffee. That and the one round that hit clanged off the front armour of the Panther.

Cards start being added to the deck, infantry start spilling out of the trucks and finding cover. Usefully (again), this included the 2 platoon's bazooka. It got a shot at the Stug which had immobilised one of 1 platoon's trucks further back down the convoy, and again there was a resounding clang of bazooka round off Schürzen. 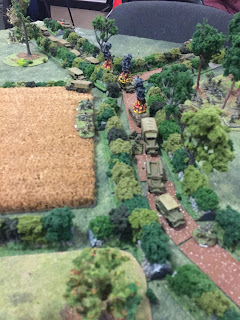 About this point the Shermans managed to spot some German infantry (actually the 81mm mortar section) in the woods at the top end of the road, and began to do something useful. Sadly the Sherman in the middle of the convoy cops a point blank flank shot from the other Stug, and brews up (cries of 'Ronson' round the table!).

Slowly but surely the US start to mount a fightback. More infantry deploys off the trucks, and a firefight ensues at the head of the convoy between 3 platoon and the German mortars, while the two lead M4s breach the bocage (and avoid getting stuck), and exchange fire with one of the Stug's and machine gun fire with an infantry section. The Stug gets a lucky shot which takes out one of the Shermans (sadly the tank section command). 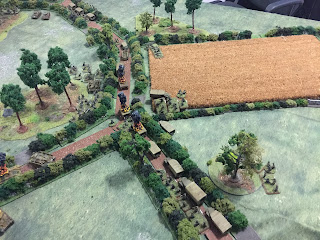 At the rear of the column, the other two M4's likewise find a way across the bocage, and engage in a much more productive duel with the Panther and the Panzer IV. One of the M4s takes an engine hit in the first round, but the Panzer IV gets a direct hit and is KOed. Next round, both M4s pile in on the Panther, which is flank-on the other side of a bocage hedge, and one lucky shot wreaks carnage in the turret and knocks it out.

Meanwhile, a German infantry section close-assaults across the bocage, and drives off the remains of the Allied HQ section.

And that's pretty much where we left it. Consensus was, we think, that the Germans had done what they came for, and (being down to two tanks) now would be a good time to bail, especially since the US infantry were starting to deploy and defend the convoy.

In summary - what a blast :D TomG's first game of IABSM, and he is completely hooked!

[1] This isn't quite how we played it, but how we'd do it in hindsight.
[2] I know some people play without a Tea Break until non-blinds cards are added. We never have - it adds to the fog of war, and that's a win over the rather frequent appearance of the Tea Break card: statistically it all evens out in the long run, but makes for interesting fun in the short term.
Posted by Mike Whitaker at 14:33 3 comments:

Not only will they do for a convoy, one of the scenarios in Belleville or Bust needs a vehicle park at some point! 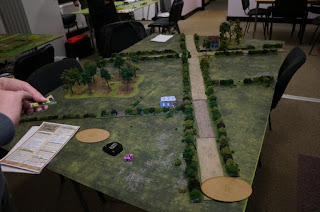 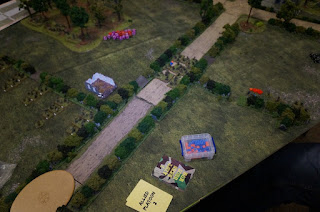 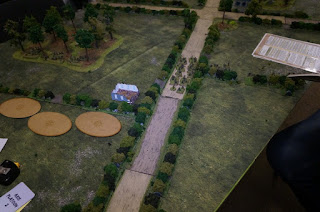 Posted by Mike Whitaker at 09:47 No comments:

I got to know Nick properly when he started attending the club last year, and brought along both his WW2 game (Props and Pilots) and the Flintloque-inspired Sharp Practice 2 variant, which we later christened "Twilight Practice". Like many gamers, he could get deeply into subjects, and talk (as we like to say on the Meeples podcast) for England about such things as obscure WW2 aircraft, 3D printing, etc etc.

He'll be sadly missed - I'm hoping we can still arrange to put on his Twilight Practice game at Hammerhead, although I'm not intending to take any steps on that score for a while.


I am writing to share with you some very sad news. My dearly beloved brother Nick has passed away at the very young age of 55. He died at home in his bed of natural causes. Just as this will come as a shock to you, so it has been a shock to me. Nick had not knowingly been in poor health but had an undiagnosed condition that caused his death. Thankfully, I am assured that he would gradually have lost consciousness and would not have experienced any pain.

We all have our memories of Nick, – too many to share. To me though in amongst the great intelligence, numerous skills and his human frailties, he was always my very loving and much loved big brother. His loss has left a void that will never be filled.

Posted by Mike Whitaker at 13:06 No comments: