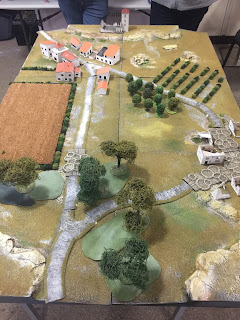 The first game of the club's IABSM campaign, which has migrated from being "Blenneville or Bust" to being "29: Let's Go Large" to "oh, sod it, let's make something up based in Italy because Italy is a) fun and b) not Normandy"! So much fun, in fact, that I only took one photo!

It's 26th August 1944, and A Company, the Hereward Fusileers (commanded by Carl, aided by Pippa, Ash and AndyB), have been tasked with taking both villages from the Germans (Gary, with help from AndyM and Tom) before nightfall. The latter had the classic slightly understrength company (which is a roundabout way of saying "I must paint those last two German sections!").

Both sides got support lists to choose from, rather à la Chain of Command. The British chose a Firefly, two Sherman IIIs, two pre-game stonks, a FOO and battery of 25pdrs, a sniper and a Kittyhawk off the 'cab rank': I suspect rather too much of this might have been in the spirit of 'oo, wonder what this does' (still surprised they declined the Churchill MkV CS - 95mm howitzer on tracks!), and I'm sure I overpointed the P40, as only activating on a 6 when its card comes up makes it markedly less useful, and possibly the stonk. The Germans went for the coldly practical: 4 off-table 80mm mortars, a Tiger, two StuG IIIG's and a sniper.

As umpire and campaign adviser, I stood back once I'd devised the scenario, and before listening to the players' plans, and asked myself what I'd do with both forces: the Germans pretty much agreed with me, placing a Zug in Santa Maria, one in Santa Magdalena, the third in the olive grove/vineyard area. They plonked the Tiger in the ruins of the churchyard, with a nice view of the battlefield, and hid the StuGs.

Were I the British, I'd have bypassed Santa Maria entirely barring a small force to keep the Germans interested (a blind and a platoon, perhaps), laid smoke west of the road into Santa Magdalena and gone for it, foot on the floorboards, on the theory that if I can take Santa Magdalena I can mop up at my leisure.

The British had a degree of internal debate before deciding to go the roundabout route, essentially doing the exact reverse: strike at Santa Maria, push round on the eastern road. To be fair, the initial strike was pretty classically beautiful: AndyB's platoon were briefly pinned by mortar fire in the woods before the platoon's 2" coughed up a wall of smoke across the front of the buildings and all three sections came in from the south side. There then followed a textbook house clearance - Nos. 1 and 2 sections fired on the first building containing a German section, did it a couple of shock, a couple of kills and more importantly a pin, and in went No. 3 section to close assault, winning by one kill and driving them out.

By this time the Shermans had turned up, and one tossed a couple of HE rounds in the other building containing a German MG42, set it on fire, drove them out and pretty much wiped them out. That was the cue for the other German section to bail out of the village towards the vineyard, and it got caught in the open on the way out.

Meanwhile, a dummy blind headed along the wheat field to the west towards Santa Magdalena, and proceeded to make a pain of itself by simply failing to be spotted while not spotting anything either - it did keep the Germans in the village interested though!

7 Platoon deployed on the edge of the woods, in support of the tanks, preparatory to advancing on the olive grove under a 25pdr barrage...

At which point... the Tiger (in the church, with a glorious field of fire) and the StuG in the vineyard deployed off blinds, and it all went horribly wrong for the British. Within about four actions from the two tanks the Firefly's gun was out, one Sherman was disabled, with its crew bailing for cover, and the other went up with a bang. Unteroffizer Honisch in the Tiger is well on his way to Junior Ace.

The British are, understandably, hollering for any kind of support that will turn up: first up a fire mission from the 25 pounders that fails to do more than scratch the paint. It's followed by a P40 peeling off the cab rank, dropping a bomb on the Tiger, just missing and doing some damage to the church that they're going to have to explain to High Command.

The British push 7 Platoon into the olive grove, but it's clear they are now in a position where they're not going to manage to take Santa Magdalena, not with a Tiger on the loose. To quote the post-session summary for the players:


It's a 'winning draw' for the Germans, in campaign terms. The British have a reasonable hold on Santa Maria, though a strong German counter-attack could dislodge them, but they made no appreciable dent (other than a couple of architectural ones) in Santa Magdalena. The German battalion 80mm mortars will be called onto another target, as will the British 25pdr battery, allowing both sides to consolidate as dusk falls where they are, with the British A Company holding Santa Maria and  the southern woods, and the Germans Santa Magdalena and the heights above it. The olive grove, the vineyard and the wheat field on the east of the road are contested no-mans land, as I don't think either side has done enough to claim to actually hold them yet (yes, the British had men in both, but hadn't demonstrated that they could stay there).

So, gentle reader: how would you have done it?
Posted by Mike Whitaker at 20:52 8 comments: