Labels: battle report, dreadball, jason and vish
And here we go straight to Jason and Vish at Well 'Ard Road Stadium, Trontek, for the Valkyries' last game in this year's league...


"You join us with team news. The Valkyries' starting six, unsurprisingly, doesn't include striker Ola Gunnarson, who is still not right after a post-match visit to the hospital several games ago after a Teraton landed on her. Blonde bombshell Freya Siggurdsdott... OW! Hey! what was that for, Vish??? That book was heavy."

"Vish thought he buy you new thesaurus, find some new words for smoking hot and blonde?"

"Oh... ok. Anyway, the striking and fair-haired Freya Siggurdsdottir takes her place as point striker, backed by rookie Anya Anderson. The Valkyries are down a jack, but they're playing new guard and wanna-be keeper Birgitte Pettersen in her place, in a two-pronged attack with Greta Fredrikkson."

"...have signed Buzzcut. Vish looking forward to this."

"Our viewers are dying to know, Vish. When the girls play Orx, who do you really support?"

"Riiiight. Ok. In other matches round the league, the Devastators take on the Raiders, and the Unmentionables take on the Asterian team, the Litigating Circumstances. Just a reminder - for the Valkyries to win the league, they need to whitewash the Orx of Trontek, and both the Devastators AND the Unmentionables need to lose by landslides. I don't give either the Asterians or the Raiders much chance, especially after the Valkyries beat the Raiders in three rushes two rounds ago... Let's see a clip of that..."

"Heh. Let's see all of it. It pretty short. Raiders only had ball for two seconds."

"Strike Valkyries, fumble Raiders, and strike... There you go."

"Well let's see. Tigers get the ball first, and here comes Buzzcut... slams into Pettersen. And she just stands there and grins at him."

"He tries again... and.. oh my. Pettersen stiff-arms him across the chest, and Buzzcut actually goes BACKWARDS."

"And there goes Vish spraying our sponsor's product everywhere again. Mega Cola, for when you need to do a really GOOD spit take. Buzzcut's getting yelled at by the Tigers' offensive coach, starts moving, but Heldstrom, one of the Valkyries two rookie jacks slams him.. down she goes, but she's still moving... The girls' game plan for Buzzcut's pretty obvious."

"Not half. Here comes the Tigers' striker now, picks up, sidesteps, tough one pointer in heavy traffic. The crowd goes ... mild, would be the best description. They're expecting more, I think. And there's a LOT of Valkyries fans packed into Well 'Ard Road. The ball's in, and ... here comes Pettersen again on Buzzcut, and Wollgard, and Fredrikkson - triple team, and down he goes[1]... looks like he's quite badly hurt there..."

"This not like Buzzcut at all. Beaten by a girl."

"Vish take that anytime. Heheheh. And that hit of season contender."

"ANYway. Freya with a clean pickup, quick three-pointer brings the score back to two in the Valkyries' favour: she makes that look so easy. In comes the ball again, lots of pushing and shoving against the two Valk's guards, the Orx have the ball... but here comes Greta..."

"Ooooooof. Vish hear Ork teeth rattle from here. Would if he had any."

"Down he goes, and here comes Anya Anderson - quick sidestep round the fallen striker, sidesteps a tackle, easy as you like two pointer. The Valkyries are four up."

"Latest from the Raiders - four up!"

"Didn't expect that, folks. And the weirdos... sorry, the Asterians... are three up against the Unmentionables. Could we have the biggest final day upset in League history on our hands here?"

"Vish hoping so. Do they eat sushi?"

"That one tough Ork striker."

"Yeah. Ouch. That's Heldstrom off, flattened by one of the Tigers' guards. And here they come, round the side of the Valkyries defence... easy two pointer..."

"Can't believe he missed that. The ball's in the Valkyries' left forward strike zone, and ... yup. That's Buzzcut, back on the Tigers' bench again: girls need to wrap this up in a hurry... Oh... my... goodness..."

"Quite literally, big guy. Ola Gunnarson, off the bench at a flat run, scoops the ball up... juggles it.. yes.. no... yes. Down the wing, sidesteps the jack trying to trip her, long arcing run towards the Tigers three point zone... she could pass to Sigurdsdottir, who's waiting in the zone...[2]"

"And doesn't. Into the strike zone, leaps and throws. STRIKE. STRIKE! The Valkyries WIN BY A LANDSLIDE..."

"That probably going to hurt more than being hit by Buzzcut today.... wait. News from Raiders..."

"Yes, Vish. It's up on the big screen. The Raiders win by a landslide! The away crowd's going mental. And the Unmentionables are still a four pointer away from being swept by the Asterians, too..."

"Valkyries could win this..."

"It's bedlam in here - we have the Unmentionables game on the big screen, no-one's leaving..."


Sad to say, Rob's Nameless (the Arctech Unmentionables) somehow pulled it round, managing to landslide John's Asterians. So in the end I came second, which I have to say I'm very pleased with...
[1] Guard + Jack threatening, 3+ skill Guard slam, (3+1+1) dice + 2 coaching dice vs (4-2) dice. I won 5-2 and Buzzcut completely blew the armour roll... 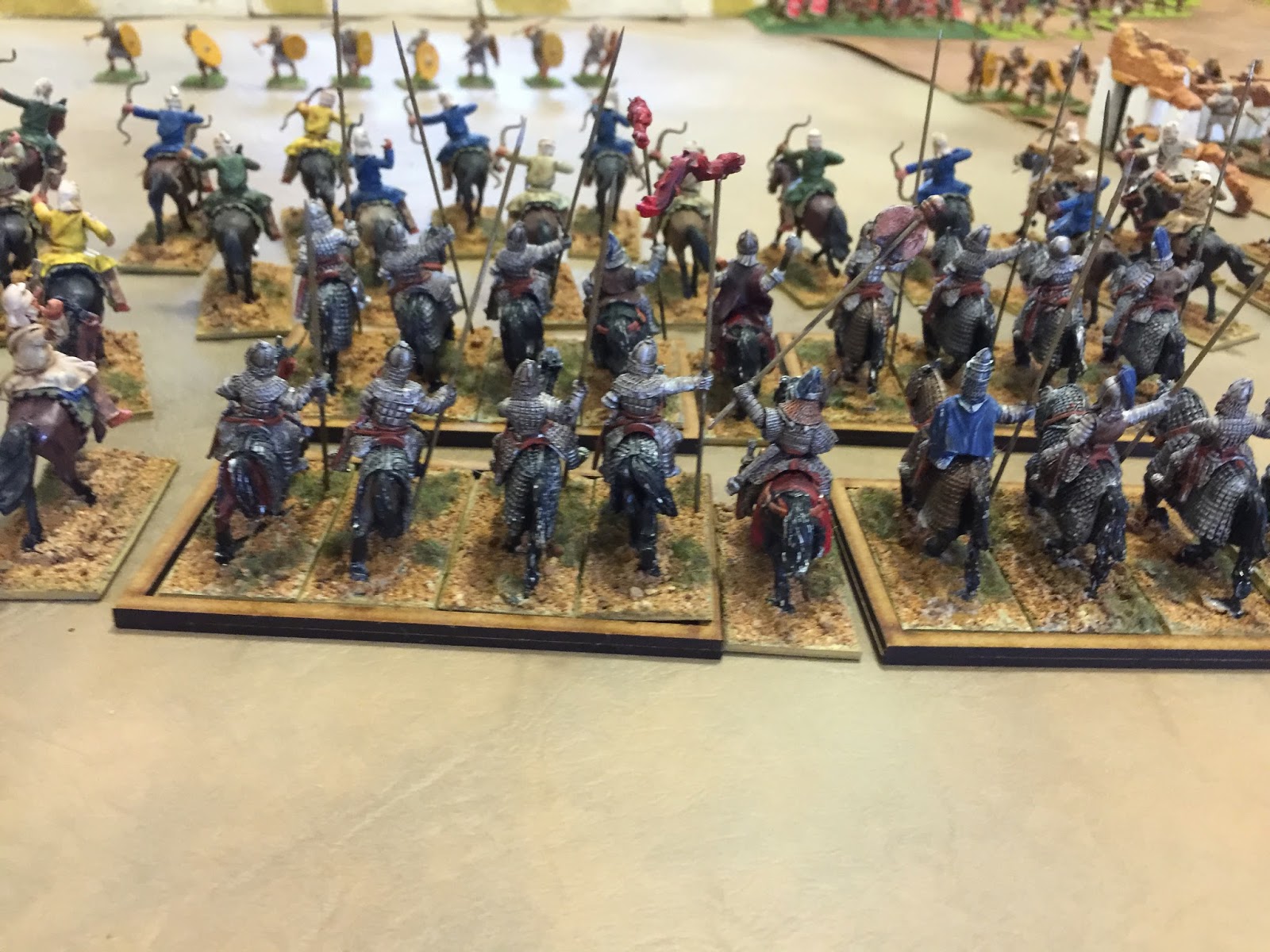 Today's fun down the club was our Roman Civil War campaign day - I took my Parthians, but as we had an odd number of players and one of them was late, I only got to play in the first game, which was a doubles game which saw me across the table from Grahame of our club. Grahame knows WAB inside and out, and the ins and outs of almost every rule in the book (although I do have to keep reminding him that skirmish cavalry don't fear charges from foot!). Hence I was pleasantly surprised that our half of the table was pretty much a draw.

For a gallery with a few more photos, check the club's post.


Our thanks to Grahame and Andy H for organisation, and to Pen and Sword Books and PE2Collectables for generous donation of prizes.

The first Hereward Wargames Show will be held on Sunday November 1st 2015 at the Cresset centre in Bretton, Peterborough, under the auspices of Peterborough Wargames Club. It is our intention that the show will feature a considerable number of participation games, as well as the usual demonstration games, traders, and a Table Top Sale, with stalls available by the hour.

Details of games and traders attending will be added to the Facebook group and to the website as they become available, as well as admission and table rates, so keep checking back for news.

In case you were wondering, that's the week before Crisis and the week after Leeds next year.
Posted by Mike Whitaker at 21:06 1 comment:

It was twenty five years ago today...

Labels: tv, ww1
...that the final episode of one of the BBC's best comedy series ever aired.


Despite one of our Government Ministers making a complete ass of himself over it, this still ranks as one of the most powerful pieces about the First World War in mainstream TV.

Part of the reason it works, I think, is the contrast between the silliness that Blackadder was famous for, and that end scene. But an even larger part is that we've watched and laughed with that dysfunctional bunch of soldiers for the whole series... they are, in an odd way, ours.