Labels: battle report, club, compendium, dark ages, dux britanniarum, series, to britain's shores
So here we are with the first playtest of a new raid scenario for The Dux Britanniarum Compendium.

Standard practice for these is I write up the scenario page, and hand it to Andy to set up without help from me, as that's usually a great way of finding out where I've not written things down because I thought they were obvious.

As per normal, terrain setup is random, and we're aiming every time we do this, at least to start with, to either have a random choice of two scenarios to test (so as not to colour our terrain choice) or get a third party to set up terrain.

This scenario is currently named 'Deer Hunt' but may get renamed to something a bit more evocative - given the way the rulebook scenarios are named, probably 'Hunt For The White Stag'. Essentially, both sides have heard rumour of a mighty stag that they wish to bring down, and there's a fairly disordered (deliberately) set of setup conditions as the various groups and nobles straggle onto the battlefield looking for the stag.

The stag is set up basically to run from one short edge of the table to the other, with some rules to make it veer away from units.

Things worked out pretty well - we had a fascinating standoff between the two lords, neither wanting to pursue the stag as it would mean turning a flank to the other, and of course, both of us probably had Carpe Diem cards, which would have made that rather painful. I blew am Aggressive Charge to get a hit bonus on the stag with a group of warriors, failed to kill it and got a warrior nastily gored for my pains, before the stag broke from combat and kept running.

Several bowshots from both sides followed it, but it managed, eventually, to flee the table, while my warriors made a real mess of some of Andy's warriors and levy. Meanwhile, the two lots of hearthguard got stuck in, which resulted in a long drawn-out scrap and excess shock on both sides, before the remainder of Andy's warriors hit me in the flank. WITH a Carpe Diem.

At about that point we called it.

Our rule with these playtest scenarios is going to be that they will count for part of our campaign if we determine the core scenario isn't fundamentally broken, otherwise, as they say, "it never happened". I'm pleased to report that in this case the main issues were some needed clarity in the setup instructions, and some minor tweaks on the stag's movement and combat, but otherwise, it seems to work and it seems to give (because of the scattered initial deployment) some very interesting tactical decisions.

Now if Warbases' would just make a dead stag and one trussed on a spear, I'd be a happy man.

If you want the in-character version of events, mine's here, and Andy's, with out-of-character observations, is here. You'll note some interesting in-character thoughts about the nature of belief, and the White Stag: does it matter if it's actually magical? In fact, no.
Posted by Mike Whitaker at 11:07 No comments:

Sithric blinks, pauses and takes a deep breath. "I... ahh... alright... Old... old Martha says that Hedric..." He rests his hands on his knees, exhales, inhales again from his hurried run. "That's her grandson..."

I allow myself a chuckle. "I know who Hedric is." I should, I've been teaching him to use a spear for the past winter.

Ecgwine and I exchange puzzled looks, then I catch his woman's expression. Evidently this isn't unknown to her. "The white stag?"

Lavinia worries at her lip, frowns. "It's only a wives' tale."

She shrugs, spreads her hands in a helpless gesture. "It..." Another shrug. "They say it's supposed to be a messenger from the gods. That it's not possibly to catch it, but..." A half-smile. "That it can lead you on a quest, or to great glory or riches..."

I allow myself a faint snort. "What do you think?"

Slim fingers run through dark hair, and she makes a wry face. "All I know is it's a very old tale, and Martha believes it."

The Young Wolf's voice behind me makes me start. "Where was it seen?"

He turns to go, and I follow him. "You don't believe this, surely?"

A smile, teeth bared like the wolf he's named for. "Does it matter what I believe?"

He chuckles. "Martha's of the local folk, remember. If they believe, and we can bring it down... Besides, what if the Britons do...?"


It is, truly, a magnificent beast. Next to me, as we crouch near some rocks with a wary eye on the Britons who also seem intent on bring it down, Wulfstan breathes, "Gods, Lavinia...." I nod at the unspoken question. "It's just a stag." As it's no more than thirty or forty paces away, it's easy to see it's just a stag - its hide is a rich white, almost aglow where the low evening sun catches it. Marcus nocks an arrow, as does young Torvald, the newest member of our little band now Aelfric has named Sithric his bannerman. I follow my usual ritual, choosing an arrow, touching my fingers first to the carved cross around my neck on a leather thong, then to its head, then nocking it. I risk a glance back whence the stag came - Aelfric's hearthguard and the British lord are facing each other across a short span of ground, neither willing to make the first move towards the stag...

This close, I can see it's been wounded, a gash from one of Ecgwine's warriors' spears as it dashed across their front, the blood stark against white. It's maybe a hundred, a hundred and fifty paces from the safety of the deep wood that we'd none of us follow it into, not with the Britons here.

It turns, for a moment, as I have the arrow at full draw. Three bows loose almost as one, one of the arrows just grazing its hindquarters. None of them are mine - I hesitate, just for a moment, to take this magnificent creature in.

I realise with an odd certainty that I can bring it down, that it may fall to me to do so some day. That, I decide suddenly, will not be today, though. My carefully-aimed arrow passes harmlessly through the great ivory-tipped rack of antlers, and the white stag pauses, just for an instant, looking at me, then tosses his head and kicks up his heels, full speed for the shelter of the deep forest. To my right, Ecgwine's men raise a shout and hare after it, and there are cries and yells from beyond them as the two hearthguards clash, that grey wolf banner above the heads of the struggling men.

As I watch, the banner wavers, falls... 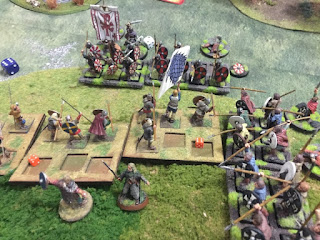 I nod, pointedly not looking down at the great rent in the mail shirt that he was so proud of, the widening pool of red. "Aye."

Sithric swallows, noisily, voice hoarse with pain. "I messed up..."

There's a gasp from behind me, and the girl's there, kneeling, hands reaching to check him over. I block that movement with my free hand, and give her a tiny, regretful shake of my head when her head snaps up, dark eyes meeting mine. She bites her lip, hard, sits back on her haunches. "Oh, Sithric..." There's a catch in her voice, but no tears. She's learned well, that one. Warriors don't weep. At least if we do, not where anyone can see.

Before she has to.. or can... reply,  his grip loosens from mine, hand falling limp to the blood-stained grass. It's not clear if her breathed "no" is answer to him or an attempt to deny his passing.

I give death a moment's space, then reach to close his eyes and murmur softly "Told you to slow down, boy..."
Posted by Mike Whitaker at 11:08 1 comment:

Labels: compendium, dux britanniarum, secret project D, too fat lardies
Since it will leak out on the next Meeples and Miniatures podcast (due out today-ish) I may as well let folks know now:

With Rich Clarke's blessing, and assistance from my partner in Dux Britanniarum related crime Andy Hawes, I am working on "The Dux Britanniarum Compendium" for publication by TFL hopefully not TOO much later in the year.

Contents will include:
- at least 6 new playtested raid scenarios (which are designed like the current ones to be highly replayable)
- a more detailed approach to battles
- a bunch of new character tables to add depth to your campaign annals
In addition we'll reprint my terrain rules and possibly a couple of other things (with permission) from the TFL Specials, and there may be other stuff yet as we play-test and bounce ideas around.

At least 40 pages, possibly more, to the usual DB production standards. Will be released as a reasonably priced PDF, and we're looking at ways of getting you a print copy that don't break Rich or my bank as well.

Watch this space for more details, and probably some teaser pics.
Posted by Mike Whitaker at 17:17 No comments:

18 English archers
5 men at arms with pole weapon of some sort
6 crossbowmen (this might be the tricky one)
6 assorted gun crew (hand weapons, empty hands etc)

Anyone got anything they want to get rid of? money waiting, but preferably not at the wince-inducing prices some of them go for on eBay :D :D
Posted by Mike Whitaker at 09:14 1 comment: