Labels: discord, virtual undistancing
As various communities I'm in are looking at ways of doing Virtual Un-distancing, I've started a series of posts on my personal blog on various technologies you can use. First up, Discord. 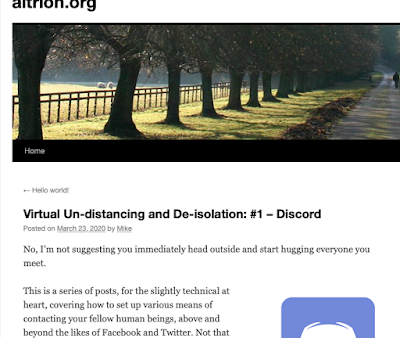 Posted by Mike Whitaker at 14:51 No comments:

Labels: discord, dux britanniarum, online convention
Ok, so, two job interviews (for the same job) and a lot more tidying and stuff later, where are we?

The "Miller's Tale" Discord server is UP!

If you want to join, the invite link is here - you can sign up in a web browser, or if you have the Discord app installed on your tablet, smart phone or computer, the link will take you to the server. There are a number of chat channels, as well as the potential to set up voice chat for online games. or even one to one or small group video chat. I'll be there as TroubleAtT'Mill.

Have fun - treat it as an adjunct to all your current social media, with maybe the advantage of being a little more real time and not subject to the vagaries of what the system thinks you should see on your timeline. Also, voice chat? :D

I dunno if anyone else has noticed, but Amazon's Prime service is creaking a little under the load of a lot of people wanting stuff delivered (remember they run an Amazon Pantry food service which is probably breaking at the seams like all the others). Sadly, this means a couple of bits of kit I need to be able to do a pukka job on the Dux Britanniarum online game aren't going to arrive till possibly Tuesday, so I'm going to regretfully defer that to Saturday 28th March (Chillcon day, were it sadly not cancelled).

And now. on with the Compendium, once I've checked my tame cartographer (James) has done the maps I asked for.

Posted by Mike Whitaker at 17:00 No comments:

Labels: discord, dux britanniarum, online convention
Assuming I can get the cameras etc all setup, I propose to run a game of Dux Britanniarum in the studio on Saturday. The intent is to have two players or teams in separate channels on Discord running each force, who will communicate their moves/intentions to me so I can move their forces.

EDIT: due to delays in Amazon deliveries, this is postponed to Saturday March 28th.
Posted by Mike Whitaker at 11:18 2 comments: 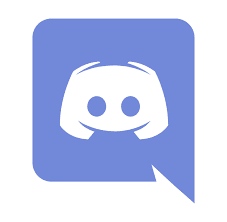 I am in the middle of setting up a Discord server for online gaming and chat. This is not intended to replace Twitter, as that's a happily thriving community that I'm not interested in superseding or competing with (I am not an idiot).

However, it's going to contain at least the following:


The server invite link will be up later today or tomorrow, once I have things locked down and bots created to my satisfaction.
Posted by Mike Whitaker at 11:14 2 comments:

State of the Mike

Labels: administrivia, i atent dead
I'm starting to think I should have "I Aten't Ded" as a tag on this blog (sounds of typing - oh, wait, I do!), although to be fair if you've been following me on Twitter you'd be aware I've been busy.

I came down with a rotten cold (no, not Covid-19!) the last two weeks of February, for which my brain was typically getting about as far as 'Good morning" for the first week and then giving up - it took me a week before I had a day without a sinus headache or migraine. Sadly, not enough brain to string coherent sentences together for DuxB... Once I recovered, life has been a combination of catching up on work (as *another* of our team was leaving, deadlines were looming...) and finishing up tarting up the Dead's Army boards, which, if you HAVE been following me on Twitter, now look pretty bloody awesome, and you can see them at Hammerhead tomorrow!

We are (after a last panic to assemble the Rubicon telegraph poles I'd bought and forgotten about) now done, and I was looking forward to a weekend off at the O2 for my annual pilgrimage to Country2Country and then finding some time to finish the Compendium.

Fate has other plans. Just about every US country artist has fled the country in a Covid-19, Trump-induced panic, so C2C got cancelled. And on Thursday, my boss called me to tell me they were letting me go with immediate effect. If you want the gory details of the latter, feel free to DM me on FB or Twitter, or ask me at Hammerhead, but my opinions probably shouldn't be aired anywhere permanent and public :D

I have various agencies looking out for things for me - if anyone knows of Perl developer vacancies, particularly short term contracts or even part-time ones,  especially if they allow telecommuting (not that they might have much choice soon!), feel free to let me know. However, I do have most of a month pay in lieu of notice, and a couple of small contract jobs from CricketArchive to extend that with luck, so, the short term plan:

A good day on the Compendium 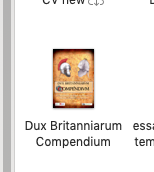 I've sorted out a bunch of stuff (with the inevitable 'damn, I've added a page feed near the top of the document, and now several sidebars are on the wrong page!'), and there's probably two evenings work left (not including the index and drawing a map), which will probably be Tuesday and Thursday, with luck.
Posted by Mike Whitaker at 22:39 2 comments:

Labels: dead's army, studio, terrain
Fingers crossed, anyway. The first two bits of foam board seem now to be stuck flat where they're meant to be, and I have stuck the last one down with the aid of five large household paint cans as weights.

In other news, thanks to AndyM and the guys, the TV is now up on the wall of the studio (that actually happened on Wednesday) and I spent some time today setting up the Apple TV properly so I can toss a primary or secondary display from an iPad, iPhone or Mac to it. The uses of this are many, from D&D initiative trackers and map displays, through watching the Test Match to showing me what the camera or cameras see when I'm shooting video. (This also makes the latter one step nearer!)
Posted by Mike Whitaker at 20:48 No comments: