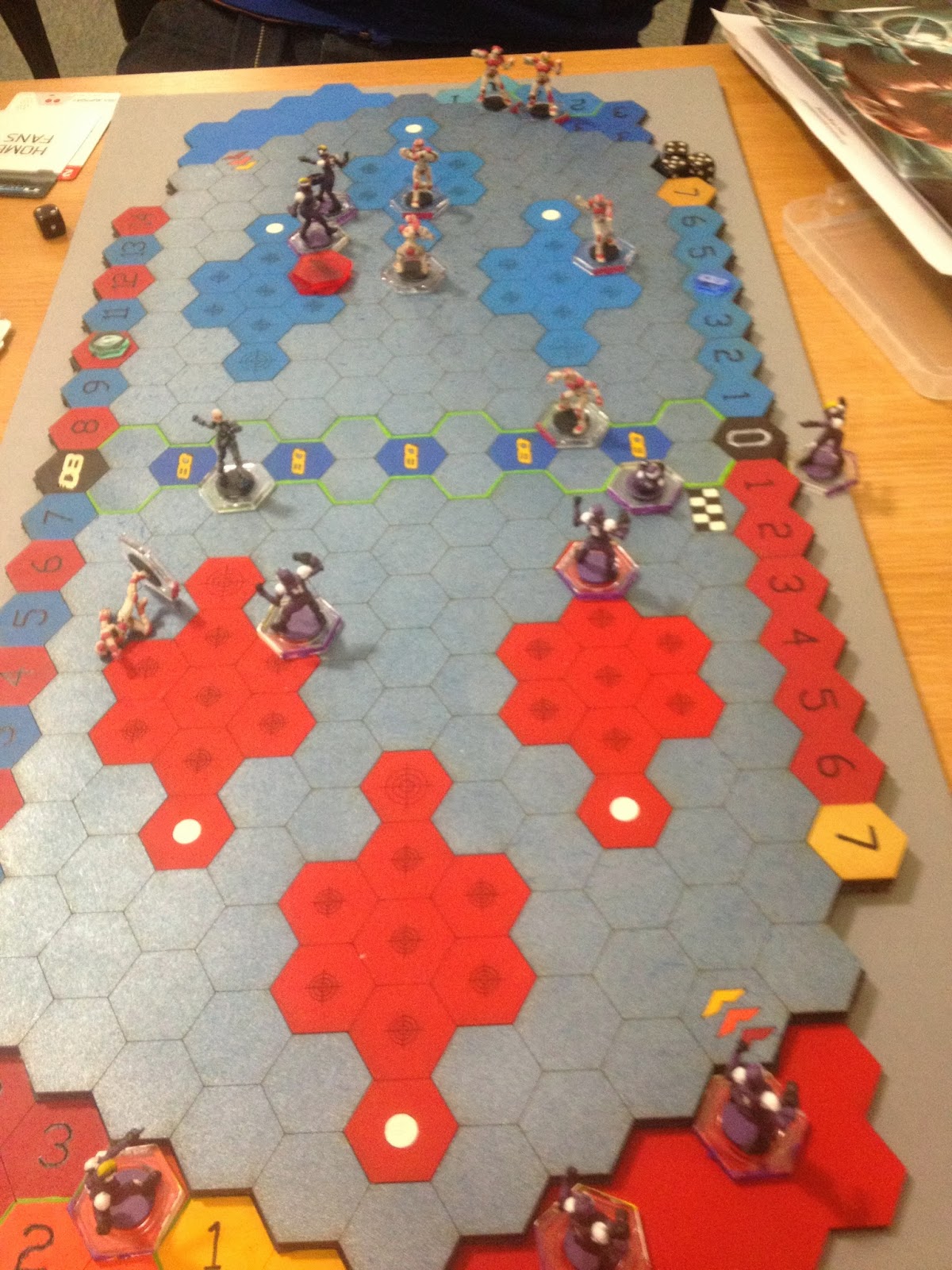 First round of the club's Dreadball tournament. As it turned out, we had 7 players, so I ducked out to start with to check up on our Hammerhead game, and returned in time for a game against James' "Dream Reapers", another Void Sirens-based human team on his excellently painted Mantic MDF pitch.

So it's over to the Reaper Stadium, and Jason and Vish:


"And you catch us with two rushes to go in this battle of the Sirens, the Valykries against the Reapers. The run of play has gone the way of the Reapers so far, as they're three points up with the ball in hand. Vish?"

"Must you? The Valkyries haven't been able to catch a thing all game, star Striker Ola Gunnarson dropping two absolute sitters for three or four pointers. Surprisingly low on carnage, too - the worst we've seen is a two-rush benching for a mild concussion, and the Reapers being done for having seven women on the pitch."

"Not enough blood, Vish think. Valkyries been double teaming the Reapers' Guard, Dawn, but it all been a lot of push and shove and handbags..."

"Right there, big guy. And here come the Reapers now with a gift of a Strike that'll put the game out of reach... And oh... my..."

"Vish can't believe she missed that. Absolute sitter. My grandmother could have scored from there with her eye shut."

"The ball scatters, right into the path of Valkyries' Jack Katya Svensson... she's not been with it these last few rushes: rumours abound of too much mead last night. But Ingrid Sigurdsen..."

"She is that. A neat pickup without breaking stride as Greta Fredriksson and Reapers' Guard Dawn are having another pushing and shoving match. She crosses halfway, flicks it neatly to Gunnarson - the Valkyries are going to have to play for overtime, because the two guards are still arguing, haven't moved an inch off the four point spot..."

"For about five rushes. Bo-oor-ing. Vish can watch that on the kiddie channel..."

"Yup. Gunnarson catches the pass from Svennson... fingertip juggle and snag at full stretch at the third attempt... and... That's it. The siren. Game over, the Reapers WIN! If only she'd caught that cleaner, she could have had time to flick in a three pointer and take us to overtime."

A fun game: it took me a couple of rushes to remember I was playing a team that valued carnage less than scoring, so I was a couple of points down before I adapted my strategy. My dice rolling sucked: must have dropped three or four sitters, and fluffed more than one throw.

As ever, though, it's a great game. Off home now, to grab and read the Xtreme Beta rules.
Posted by Mike Whitaker at 16:07