More of a tidy results in more stuff for sale, some painting.... 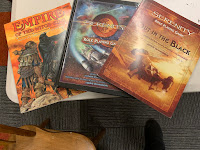 I've had a quick sort through the RPG shelves, and the following are available for sale (and will be going on eBay on Sunday if unsold):

I've also acquired (thanks to the club's honorary American and all-round nice guy Shawn), a new magnifying daylight lamp (twin to my current one) and an airbrush compressor, as they're UK-power compatible and he is, sadly, leaving us for the Colonial shores. Now all I need to do is find the blasted airbrush!

Also nipped into a purveyor of figures and paints that do not have anything to do with wargames (it says so on their annual report, guv!) to pick up some more Contrast undercoat and a couple of colours I don't have (as sadly my preferred supplier had run out of what I needed). Pro tip - if like me you have trouble remembering which paints you own? They do actually do an app on both iOS and Android for keeping track of your collection, at least of their stuff: at the price of Contrast paints I'm quite keen to avoid duplicates, too! 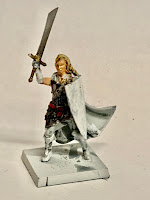 With those in hand, I did grab a bit of time over lunch to paint (this is me, don't expect Golden Demon standard!) one of the Shieldwolf minis... Some experiments with Contrast white, which I find comes out very grey - the cloak I wound up highlighting with AP White on its folds to get it to look right. Mail is Contrast Basillicum Grey, which works ok. The face is AP Barbarian Flesh overbrushed on Contrast Guiliman Flesh, as I do not like how the latter works on its own.  Hair is Contrast Skeleton Horde, her belt is AP Pure Red. The shield is AP White + AP Gloss Varnish, ready for a custom decal off the laser decal paper that should be arriving today.
Second pro tip for lousy painters. If you're using the Citadel base coat sprays for Contrast, get a pot of the matching Citadel base paint: if you mess up with Contrast paints, you can then let it dry, brush over in the base colour where you goofed, let that dry, and try again.