Labels: cats, d&d, dux britanniarum, hobby, meeples and miniatures, podcast, thoughts, wip
Seem to be having 'days' of late, of the fragmentary nature. 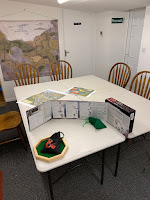 Have tidied the workshop ready for tomorrow's D&D session... sometime after blogging yesterday I had one of those glorious DM's "ahah!!" moments where a scenario hook and a bit of long-standing campaign history came together and fitted with a resounding clunk, which caused me to dash off 300 words of 'note to self before I forget'.

I really ought to count up how many words I write a week sometime. Certainly in the process of considering how to monetise the output and Do More Hobby Stuff (because, frankly, who wants to write code 5 days a week? :) I know what I'd rather be doing.) We also named the new cat, finally - meet Jolene (probably Joley or Jo for short) - what can I say, Anne, James and I all play in the same country band! She has very much settled in and wormed her way into an Ash-shaped hole in our lives.

In other news, in case I really am your only source of hobby news, Neil has announced that the end of year episode of Meeples will be the last. Very much the end of an era - I used to look forward to Wednesday recording sessions during my time on the show as one of the highlights of the week. While it wasn't responsible for me restarting the hobby (that's entirely the Reverend Phil Marsh's fault), without Neil's reviews of things like IABSM, Duel in the Dark and many other things, I'd not be where I am today in terms of what games (war- and board-) I like and the amount of stuff I do.

Meeples has, for the longest time, I think, shaped the hobby, or at least the corner of it I live in, and it will be a shame to see it end. That said, kudos to Neil for making the call rather than letting things fizzle out to an undignified end.

On which topic... no, I haven't forgotten I have a podcast too. I'm planning on spending December and the Christmas break (what little of it I have given I blew the last of my vacation taking Anne to Brussels for her birthday!) getting my hobby ducks (and Dux) in a row.