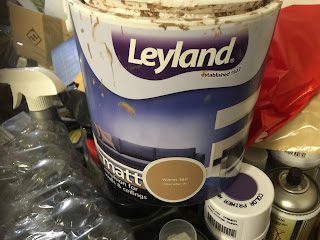 Managed to find an hour (not that I needed all of it) between close of play in the Test match and going out to a band rehearsal for the next stage of work on the hills, namely the first drybrush.

Nothing complicated, really. I went hunting in the workshop for various tester pots etc that we'd used in the past for the Omaha Beach and Dead\s Army boards, and some MDF scenery painting, before I found the original, about 2/3 empty can of 'warm tan', which had been the preferred base colour for boards before I saw the light of Bitter Chocolate. On its own, it's way too light, but as a first fairly heavy drybrush coat...

The process is pretty simple. Grab some kitchen roll or newspaper, just barely dip the brush in the paint and dab a couple of times on the paper to take the 'wet' off. What I then do is quite aggressively drybrush the rocky areas (which I want a lighter brown anyway) - it's pretty much "paint everywhere except where the brush skips over the recessed detail". Then, with the last of the paint on the bristles, do a more gentle drybrush on the textured bits of the hill, which is more a "paint only on the high spots" approach.

I know a lot of this will be covered by grass, but there are places where I want the grass pretty sparse, so having a convincing earth tone to show through is part of the plan.

Next stage, once this dries, is another paler, less heavy, drybrush of something around about Bleached Bone, which I'm pretty sure I have a big can of some DIY equivalent to hand. Watch this space.