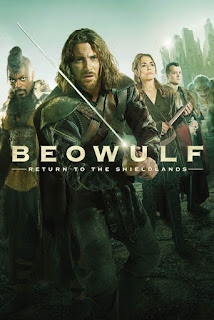 Just had this show on the Sky box and finally watched the last episode.

Lots (yay) of female characters who weren't just window dressing, including Joanne Walley as Hrothgar's widow (that's really not a spoiler, he dies in pretty much Act 1 Scene 1). Lots (man, oh man lots) of SHOUTING! I'm sure there were a few characters whose only emotional level consisted of SHOUTING AT PEOPLE A LOT. (One of whom gets beautifully silenced by the title character).

It sort of... moseyed its way along, with a lot of shouting, a lot of dubious fighting... OK. So, you're defending a narrow high-sided bridge and massively outnumbered. Why in Odin's name are you standing out in FRONT of your wide-as-the-bridge shield wall? Also, a lot of 'why is this anything to do with Beowulf'?... Right up until the last episode, which suddenly threw in a name and a relationship and sort of made me want to go back and re-watch all the rest with the benefit of hindsight - only not enough to re-download them. It was kinda fun, and the scenery (NE England) was pretty, though.

And all the factions were, to quote TV Tropes, colour-coded for our convenience in variously blue, red and yellow - shades of all three that were perhaps a bit bright for Dark Ages dyestuffs. But...

Aside from those conveniently colour-coded cloaks etc, it was all shades of grey just like the Vikings series.

FFS, people. The Dark Ages wasn't called dark because of the colour of people's clothing! And grey's a really HARD colour to make with natural dyes.