Heraldry 101, part 5 - charges, and arranging them

Labels: heraldry, series
Now we have fields, divisions and ordinaries, we can move on to more interesting things: charges, and how they're arranged on a shield.

Here are a few example blazons with some of the more common charges.

A five-pointed star is known as a mullet, so the blazon for this shield would be argent, a mullet gules.

If the star has a different number of points, it's blazoned as a mullet of N points.

A circle is known as a roundel, so this shield would be described as argent, a roundel gules. Just to be awkward, there are exceptions to this, as there are to a number of heraldic charges. Specifically, in the case of a roundel or, it's more correctly blazoned as a beazant.

If we had the sword point down, it would be referred to as inverted.

As I noted in the section on the rule of tincture, secondary colourings, like hilts of swords etc, don't have to obey the rule.

This next one is a nod to the arms of France. The strange leafy thing is called a fleur-de-lys, and is a remarkably common heraldic charge.

If they were arranged vertically, they would be in pale, and I'm sure you've already figured out the analogous terms in bend and in chevron.

And here we have the humble arrow, in this case, sable, three arrows palewise in fess argent, barbed and fletched or.

Ok. It's a bit of a mouthful, but there's a couple of important things here. Note  that we said palewise in fess. This means the individual arrows are palewise, or in other words pointing up and down like a pale, but as a group they are arranged in fess.

Conversely, this very similar shield would be sable, three arrows fesswise in pale argent, barbed and fletched or.

Like a sword, the arrow has its own terms for the secondary bits of colouring, as do many other charges. In many cases it should be obvious from the blazon, but here's an example of one that might not be, and our last, most complex blazon for this post. 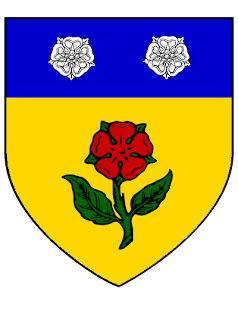 So, here we have or, a rose gules slipped and leaved proper; on a chief azure, two roses argent.

The roses on the chief are ordinary heraldic white (Yorkshire) roses, and that's what you get if you just blazon a rose of any colour.

That's it for this post. Next up, animals. Predominantly lions, 'cause heralds are fond of lions!