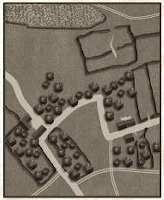 Apologies for the lull in posting - I've been pulling 10+ hour days at work the past week, and frequently the last thing I want to see after work is a computer. Hence you've been living a bit on pre-written posts :D

Wednesday night at Gavin's saw a rematch of the previous IABSM scenario, but with the rôles reversed, and me playing the Germans against Pete and Matt, with Gavin umpiring.

I deployed a platoon of infantry along the northern edge of the wood, along with a Pak40 and a tank killer squad with a Panzerschrek and my FOO, and waited. The British opening artillery stonk shook up a few sections and took out a couple of the Pak40 crew - could have been worse.

In the meantime, the British had spotted something in the woods, but weren't sure what, so one of the British Big Men bravely snuck up for a better look and found the Pak40.

A couple of infantry sections opened up on it, and despite it being dug in, it took a fair amount of damage. And finally the Axis Support card came up.... and I blew the roll.

One of the British sections came up to the nearer hedge, so I deployed a couple of sections off blinds and opened up. Most gratifying, as the section in question took four casualties and about ten shock, and didn't stick around.

About then, one blind of British tanks deployed and commenced unloading on the Pak40, to surprisingly little effect. And finally! An Axis Support card and a successful roll.

Not a bad result: one British section pinned and rather shocked, and one blind, which I suspected was tanks, reduced to zero actions for the turn.

The following turn, they made the smart choice and deployed off blinds. On my blinds card, I deployed the PanzerKnacker squad and the PanzerSchrek...

Just in range of the lead Sherman, too. Which was nice.

The next turn saw the card for the PankerSchrek come up before the Shermans. Which was, as they say, also nice. Three actions, so fire, reload, fire.

First roll - double 1. Which means a) I miss, and b) the next shot is the last because the PanzerSchrek is out of ammo.

Oh well. Better make the most of it. Double six. I get to roll 16 dice (13 for the PanzerSchrek and 3 more for ambush) against the Sherman's 6, and beat it by four hits.
Result, a very satisfying KABOOM!

Under the trees further to the left, things weren't going so well - an infantry section close-assaulted the hapless Pak40 (which had managed one shot on a Sherman and quite convincingly missed), and that, predictably, was that for the crew.

That was followed by the two infantry sections under the trees getting picked on, one being down to zero actions (and only two men).

And sadly, about there, we ran out of time. Hopefully Gavin and the guys can finish this off sometime, in which case, watch his blog for the second half!