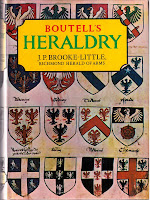 My army painting is about to shift a bit from the ancient to the mediaeval, as I start work on a bunch of caballeros for an El Cid army this weekend (which, rejoice those who are wondering where it's got to, does mean I'll have some horses to paint for the last part of A Horse Of A Different Colour!).

What I will be needing to paint is shields. Lots of 'em. Now, admittedly, the rules of heraldry really start to take hold in the 14th century, not the 11th, but they're based on evolving practice over the preceding centuries. You can break them with some degree of impunity for an 11th century army, but by the time you get to the Hundred Years War or the War of the Roses, you'd better know what you're dealing with.

My love of heraldry started with my grandfather, Arthur Whitaker, a schoolteacher and Methodist local preacher, who was a fascinating man, with scrupulously neat handwriting and a love of puzzles, cricket, and all manner of things that... I think the best way of describing it is that he had a neat, orderly mind, and loved those things that appealed to it. My copy of the seminal "Boutell's Heraldry

" was left to me by him in his will, and still has, neatly tucked inside the back cover, several templates for shields made out of card and marked in his distinctive hand.

Much like the horses series, my aim is going to be to give you an understanding of the why and the what, rather than just going 'look, shiny examples of coats of arms'. I'm a firm believer in the concept that understanding how and why a thing is what it is, is much better than just slavishly copying the 'what'.