As you're probably starting to figure right now, heraldry has a language all its own - mostly archaic French and Latin, with a few borrowings from elsewhere. So, lets add to those a bit more. First off, the shield itself:

If you speak Latin (yes, I do) you'll note that the left side of the shield as you look at it is referred to by the Latin word for right, dexter, and vice versa. This is because they're actually referred to from the viewpoint of the person carrying it.

OK, now we've got that out of the way, we can move on to actually dividing a shield up, since a shield of a single, plain tincture is both boring and rare. There are any number of ways of doing so, but these are probably the most common:
We can now start describing our shields in proper heraldic language, using what's called a blazon. Because of the Norman-French origins of a lot of the language used, you'll discover one of the most common features is that adjectives come after their noun, for example (when we get to it) a lion or.

That first shield in the group above would be blazoned as per fess, or and gules. The order of colours is always from dexter to sinister, and chief to base (top left to bottom right). So the next one would be per pale, or and gules. One can also say party per bend, or and gules, or party per pale, etc etc., although that's the more formal version and somewhat less common.

Quarterly shields are often divided up like the one in the image, with identical quarters in the dexter chief and sinister base: this is primarily because quarterings often occur when two families entitled to bear arms intermarry. In this case, quarterly, or and gules would be clearly understood as meaning the above. In more complex cases the quarters are numbered left to right then top to bottom. Taking the Royal Arms of the United Kingdom as an example, the simplified blazon (leaving out the bits we haven't covered yet), would be quarterly: I and IV, gules,...; II, or,...; III, azure... 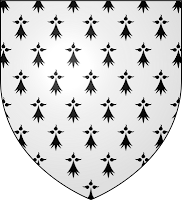 Just as an aside, if you were to have a shield of a single tincture, it would in fact be blazoned with just the name of the tincture. For example, the arms of Brittany, which are blazoned simply ermine.

And there we go. Next time, I'll cover actually putting things on the shield. Which is also going to introduce us to the most important rule of heraldry.
Posted by Mike Whitaker at 08:00