Labels: aar, battle of the bulge, battle report, IABSM, minneapolis, WW2
The first of the two games I played in Minneapolis, organised by Jeff Knudsen for the Centurions group. Actually, it should come as no surprise to regulars to know that I didn't play it, but umpired it, having stuck the rulebook, blinds, markers, cards and microdice in my suitcase :D

Photos with thanks to Jeff at https://www.flickr.com/photos/war_artisan/

The scenario pitted an American company in defence against a German attack, in some far flung corner of the Ardennes in winter '44. Snowy table, sadly, unavailable, (barring Photoshop trickery!).

Fitz (aided by Elliot and N (argh, blanking on names)) took the Germans, and Jeff and... hrm, I should have taken notes!... the Americans. The latter deployed two platoons across an obvious defensive hedge/wall/building line, holding a third in reserve back at the village. The Germans advanced across a wide front down both roads, one side with a platoon backed with a pair of StugIIIs, the other four PzIVs, while two full platoons pushed through the woods and downslope. Their pre-game stonk hit the obvious targets (farm and chateau), and caused a fair amount of shock. 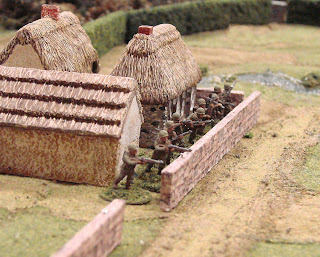 The Americans retaliated with some 105mm battery fire, which blew a track off one of the Panzers and somewhat discomfited the other. The Axis advance took a fair amount of fire from the defensive line, but the key breakthrough came when, under MG, tank and mortar fire, one of the American sections in the farm was pinned, and a somewhat unintentional and lucky close assault drove them out. 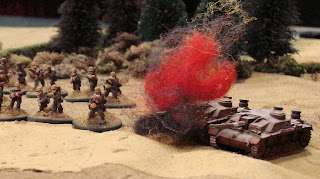 The Germans then consolidated their attack, by which time frantic requests for support from the Americans had turned up a troop of Shermans including a '76, as well as revealing two 50cals on tripods and a pair of 57mm AT guns on a hill in back of the defensive line.

Cue derisory German comments about the efficacy of 57mms.

Cue a brewed up StuG.

The second StuG got brewed by the Shermans not long after, leaving an interesting position in which the Germans had hold of their initial objective, but the Americans were falling back to their command HQ, under cover from the Shermans, 57mms, and 50cals. It would have been interesting to see what happened next.

Much positive feedback - most of the group hadn't played IABSM before, and I think they enjoyed both the mechanics and the feel of the system.

Thanks again to Jeff and the Centurions, and The Source Comics and Games shop for hosting the game.