Labels: buildings, terrain, wip
My thumb is now sufficiently healed I'm no longer worried about reopening the cut without a plaster on, so it's on with more of the luvverly Warbases buildings.

Having done the first one, the next couple (the Post Office and the Church) are proving much easier as I know what I'm doing! The laser etching on these is really nice - it'll be interesting to see how well the mortar technique works on stone, and I'm toying with the Post Office being whitewashed :D 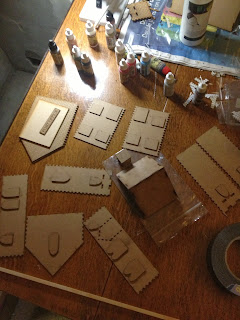 Apologies for the slightly sketchy post - I've had AndyH round most of the evening in his other capacity as a God Of Rock. The neighbours are probably glad he's left, but much fun was had and two songs crafted, at least instrumentally.
Posted by Mike Whitaker at 23:16