Unfortunately, I awoke to Reuben messaging me this tweet from the show sponsor, our local model railway shop:

We are absolutely devastated to hear that vandals have completely ruined layouts & trade stands at today's 'Stamford Model Railway Show' which we were attending. They have been caught, but show show has had to be cancelled. Please can everyone spread the word.
— Trains4U (@Trains4U) May 18, 2019 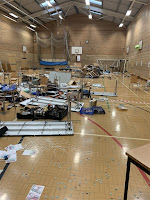 It appears that four youths broke into the school hall that was being used for the show overnight (around 4am) and proceeded to do incalculable damage to both trade stands and the layouts that had been set up for the show the previous day. They triggered the alarm, but by the time the police arrived the damage had been done.

Perhaps we're fortunate in our hobby that this is less likely to happen: most of the things we bring to shows as hobbyists are quicker to set up, and probably of less total value, than some of the magnificent pieces of work that some railway modellers produce. Too, in the cases where things are left overnight, we more often than not run shows at commercial venues with overnight security (even the Centre.MK used for Campaign) rather than schools, and perhaps we're luckier in that our tradition in the wargaming hobby has been not to pay exhibitors expenses, beyond free membership, which leaves us budget for even the smaller shows (which this was) to use more secure venues.

This doesn't stop it hurting. There's enough model railway stuff on the shelf right above where I'm sitting now that I recognise this is my hobby as well as wargaming.

I am heartbroken for the lost work - never mind the cost, some of the layouts that were callously trashed represented sizeable parts of a lifetime's painstaking work, were essentially irreplaceable.

I'm also, understandably, angry at the senselessness of it. There's been a lot of harsh words and violent suggestions on Facebook, Twitter and elsewhere directed at the perpetrators, and I can understand those, as well as the frustration at the perceived likely futility of the legal process that will follow. (However, this post and its comments are not the place, please.)

I fervently hope that there will be some form of funding drive [EDIT: there is, here] to try and cover some of the damage done. When there is. I will link it here, and I will be giving what I can and encouraging others in our hobby to do so. These folks are our brethren, as I've said many times on here and in podcasts - we are hobbies divided only by our choice of subject material. This could have been one of our shows, or a club premises.