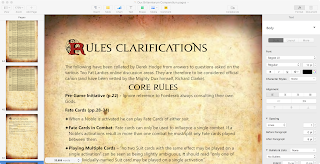 Prompted by @sprandell on Twitter asking some questions, I did a good half-hour's work on the Compendium tonight, initially adding his questions and answers to the Rules Clarifications section, and then wrestling with several tables, initial caps and 'fillos' which had come unstuck from where they were supposed to be in the document. Not as productive as I'd have liked, but useful work nonetheless :D
Posted by Mike Whitaker at 22:27