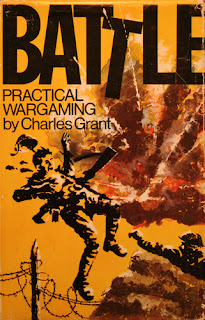 If I had a pound for every day I had this out of the village library when I was a teenager, I'd probably have had enough for a pretty decent metal Napoleonic army.

It is, unquestionably, a classic among wargaming books. For all that Grant's forces are the neutrally named RED and BLACK (always in caps, too!), and he's doing a heroic job with what's available to him in terms of 20mm figures and vehicles, it manages to capture the atmosphere of WW2. The rules are, I'd strongly suspect, the foundation for any number of descendants ... in fact, I often wonder what a family tree of wargames rules would look like in terms of what borrowed concepts from what. Certainly the rules my school club used for almost all my time there were clearly a linear descendant of Grant's, and when I later grafted infantry and air rules on top, they fitted the mould.

The three game recaps are classics, too: "Action at Twin Farms" has long been a particular favourite of mine, and the other two don't fall that far behind.

I finally bought my own copy two weeks ago - there's a decent second hand market in them, if you look around. It's one of those books that, somehow, it's better to own than just read, but if you're short on book budget, the whole book is available as a legal download from the NZ Meccano Magazine site, via here. Seriously though? It should be in every wargamer's collection if they have even a passing interest in WW2.