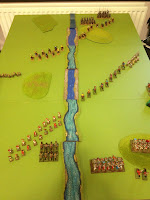 It has been a while since I last played WAB - the WABGT, in fact, in February.

To be perfectly honest, it was too darn hot to play WAB, or anything else with that level of occasionally nit-picky rules. But I did need the practice, so Grahame and I tried one of the scenarios for the Rushden Axes tournament in August, his Late Imperial Romans against my Palmyrans. 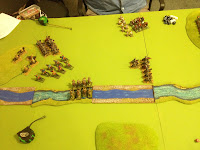 A very wacky set up, this one. A river along the length of the table, and triangular set up areas diagonally across the table.

Made for some interesting setup choices: clearly I had to charge my cataphracts down the length of the table, since in WAB they are a bit like Disaster Area's sunship - steer like an absolute cow. 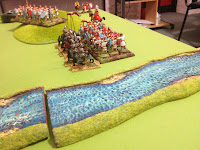 This is definitely one of those scenarios where you need to use some form of combined arms - unsupported units in what turns into a long, thin battle don't last long.

One unit of cataphracts got stuck into one of Grahame's cohorts, which tends to favour the cataphracts as they have a ridiculously good save. 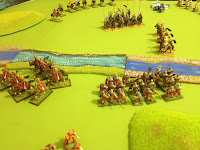 However, as they were rather lacking in support, due to another messy scrap in the middle of the table, they collected some foederati cavalry up the rear, and then another cohort in the flank...

As they say - a battle's only a waste if you don't learn from it...

In other news - where would you keep the new, unpainted figure that's the general for your cataphract-based army...

Yes, that's right. In the box with the cataphracts, you idiot!!!

Sometimes, I am hopeless. :D
Posted by Mike Whitaker at 23:32