Labels: into the woods, series, terrain
Catching up, finally - we've got the bases built and flocked, so all that's left is to actually add the trees. 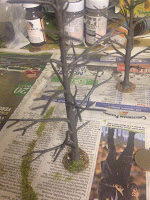 As I said before, the core part of each tree is one of Woodland Scenics' 5"-7" deciduous tree armatures, which represents a tree that's at max about 40' high in 28mm and 70' high in 15mm. Anything taller is a bit impractical on a wargames table, but (as I said at the beginning) anything shorter is a bit pathetic. Each of the armatures has a post-1993 2p piece (magnetic, remember) superglued underneath it.

I explored a couple of different approaches with varying degrees of success. The first method was, as per Woodland Scenics' own suggestion, liberally coat the armature with tacky glue, dip the result in a pot of suitable scenic material (in this case, a mix of Javis and Woodland Scenics), invert, shake off the bits, and there you have it.

Ok - let's be fair. It probably works just fine for model railway layouts, where the scenery doesn't get moved around and thrown in boxes, but by the time I've packed the trees and taken them down the club a few times, there's a generous scattering of clump foliage in the bottom of the Really Useful Box.

Plan B was borrowed from TheTerrainGuy, specifically using a hot glue gun to attach individual pieces of clump foliage.

This has one advantage, namely that when the foliage sticks, it does stay stuck. On the downside, as I'm sure anyone who's used a hot glue gun (especially a cheap and cheerful one) can attest, the stuff strings like nobody's business, and you do wind up removing strands of it unless you're very careful. Also? a) it's a lot slower, and b) as my fingertips can attest, it's called a hot glue gun for a reason!

It does work, but it is hellish fiddly, and unless you're a lot neater than me, there's a LOT of stringing.

So, back to plan A plus a new wrinkle, one much beloved of railway modellers everywhere, but, it seems, less noted by wargamers. 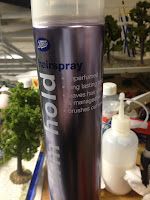 For those not familiar with the operation of the aforementioned (and let's face it, unless you're either female, a serious glam rocker or (like me) have a past career as Lindsey Buckingham in a Fleetwood Mac tribute band, you may not have reason to be) it is, essentially, somewhat sticky. It's beloved of the model railway fraternity as a means of keeping flock and foliage where it's meant to be. Basically, once you're done attaching foliage, give the tree a good spray.

Result? Better than the tacky glue alone, but still not 100% - there is still shedding, but at least my trees are silky smooth and not flyaway... wait a sec! :D

Next revision to the plan was to grab a Woodland Scenics spray bottle. This, to be honest, was a bit of a failure. I suspect that it's a fairly fine matter of exactly which glue at what concentration you use, but the nozzle failed to deliver anything that could actually be called a mist.

I have some more plans in store, at least one of which is thank' to Gavin, and apart from anything else, I have another dozen armatures to populate. This will follow in another post,  but for now, this is where I've got to.