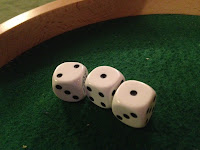 OK - let's move on to rolling 3d6. The most common thing I find myself using this for is movement in IABSM and/or Dux Brit. First question, then: what's the average roll on 3d6?

Fantastic, I hear you say. So if I'm 10" away from that unit I want to charge in Dux Brit, on average I'll make it.

But let's look at the odds in more detail. I'm not about to find enough dice to do a pretty picture, so you'll have to make do with a table. the construction of which is left as (that phrase again) an exercise for the statistically-inclined reader:


Digest that table, and let's take an example. Supposing you command a platoon in IABSM that's just activated: Another platoon has poured fire on a German MG42 in a defensive position, which has already had its actions and taken a fair bit of shock from your supporting fire, and some elements of your platoon are poised just over 10" out of close assault range. Next turn, the MG team is probably going to get three chances to shoot at you if you fail the assault (one or more of its own card, a Big Man and the Bonus MG Fire card), and you may get two (the platoon, and the platoon's Big Man if he's still in range).

Do you charge in? C'mon - the average distance you're going to roll is less than you have to move...

...but the odds on rolling 11" or more is ONLY 50%. Which gives you a 50% chance of being stuck in the open in front of an MG42 (plus whatever else is supporting it) that has a better chance than you of activating first next turn.

Do you charge in?

What odds would you like before you're comfortable giving that order? 90%+?
Posted by Mike Whitaker at 10:07