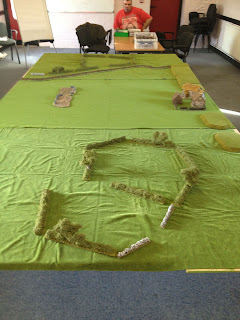 Onward, and last (cor! a post series that only lasted one more post than expected, and is finished! whatever next?), let's talk about what happens 'on the day', as it were.

There are two almost conflicting things to consider here, Number one - use all the table. If you can't, make it smaller so it looks like you are! There's really no point, especially in a crowded club environment, for example placing the objective in the middle of the table for Blue to defend and restricting the Red forces to entering along one edge, as that renders half the table, pretty much, pointless. I'm guilty of that in my Op: Squad scenarios - most of them would have fitted on a 4'x3' or almost a 4'x2' rather than the 4'x4' that they were laid out on. Equally, though, don't just start Red's forces at the far end of the table simply to use all the table space. If Blue are in defensive positions they don't want to, or the scenario won't let them, vacate, and don't have long range weapons, you're going to effectively waste several turns until the sides get into range.

Number two? Measure, and think. If Red's main body moves at 6", and he has to get 3' across the table, it's going to take him 6 turns, assuming nothing holds him up. Even if you're playing a system where good command dice get you multiple moves, do the probability maths on the odds of actually getting those multiple moves, and ensure Red can actually get there given slightly-worse-than-average dice in the likely number of turns you have at your disposal. We've had a couple of great all-day games at the club where one side was pretty much doomed to never get all its objectives, as a village a good 4 feet away at 4"/move takes an awful long time to get there....

If you've got to here, frankly, these should be bleedin' obvious. Both sides will have a mission, a goal, in their briefing. If they achieve it, they win. If they don't, they don't. It is possible for both sides to consider they've won, too!

Having said that, I've got three points to add. First off, in a lot of the scenarios I've played and run, it's either been very obvious which side came out on top, or the players have amiably discussed it for a while and reached an agreement.

Second: not every scenario is about 'winning the battle'. Sometimes, the victory conditions can translate to 'do better than historically'. Having said that, some kind of tweak can sometimes be necessary with this so as to make them a little more enjoyable.

Third? The question, ultimately, isn't 'who won?', it's 'did you have fun?' It's perfectly possible to have fun and lose - frankly, if I didn't, I'd not spend much time at club, the way I roll dice!!

If you possibly, possibly can, playtest. Do your first run with players who don't mind it going wrong and being unbalanced. There will no doubt be balance issues, places where things could be clearer. Given those, you can fine-tune the scenario, add or takeaway forces.

But remember, a lot of the tuning you can do doesn't require changing the orders of battle. The table layout gives you a chance to tweak. If Red outnumbers Blue by too much when he eventually gets to contact, remove some of the cover between Red's start point and Blue's defensive position. Or just move Blue another move further away, or add another second-floor vantage point for his machine gun team or a sniper.

Hold a post mortem. Even if it's ten minutes with a beer round a pub table, or a thread on your club forum. Solicit feedback from your players - what went right, what went wrong, what could be done different. Hopefully your players and you can keep it friendly and civil, and the constructive suggestions that result can and will make the next one better.

Which sort of brings me to another point - replay value. If it's a good scenario, folks won't mind playing it again, and it does seem kind of a shame to prepare all those materials and then use them once! So - replay it. Better yet, blog it, and make the materials available for other folks!


So, that's it for scenarios - I hope you enjoyed this little series, and thank you to everyone who commented. Next series, we go up in scale to the club campaign, and some thoughts on the various types of campaigns and what can be done to make them better. Watch this space. (But first? I have horses to paint, and several battle reports to file.)