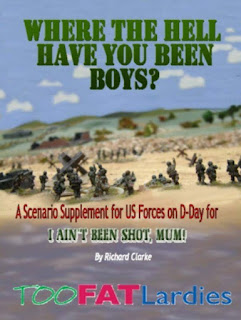 Spent most of Thursday on a train, in the London office or at a band rehearsal. I did manage to do the last of the casualty base work before I headed out to the station first thing, and a fair bit of the train journey reading through the Where The Hell Have You Been, Boys? IABSM2 supplement which contains Rich Clarke's original scenario, and the IABSM3 rules, just to check I hadn't missed anything.

It took a bit of work to convert the original to IABSM3, not least because it's a bit sketchy as written. It also took a bit of pestering Rich to find his research notes, which make interesting reading. There's a few places where the original game adds special rules, largely to make it even less pleasant for the Americans. In the light of IABSM3, it does appear that the rules as written cope with most of that, so I am, with one or two very minor exceptions, running it as per the rule book.

The other thing that amused me greatly was Rich's assertion that:

"This sounds like a lot of figures, but take it from me many, many men will be dead before they get onto the beach. We played it quite comfortably with one full US company worth of figures."

Mmm. Not so much with that last, unless your figures are individually based. At least, you probably can get by with about 150-200 figures, but if you want any chance AT ALL of figuring out which units are which on the cluttered, casualty-strewn beach by the time even wave 2, let alone wave 3, lands, you probably honest-to-God do need eighteen full assault boat sections, all clearly labelled. That's 486 miniatures, or (IIRC) 4 Battlefront UBX09 '29th Infantry Division Assault Company' boxes and two packs of extra Peter Pig BAR men. It JUST fits in a 9L Really Useful Box with four hobby tray inserts.

While we were relabelling everything on Tuesday, I found we were 2 mortar teams and 4 BAR teams short. The former is, I think, explained by there only being 4 mortar teams in a box (and you need a total of 18) and the latter, if memory serves, because I got stiffed on eBay with the last box, as it definitely contained castings I didn't recognise from the previous 3.

I think I may have found the last available box of UBX09 on eBay (props to Frome Model Centre for getting them to me on time) :D which leaves me a few figures to paint and base on Friday. Also the War World Gaming barbed wire bases arrived while I was in London, so those will need grassing tomorrow.

I'm curious, has anyone apart from the Lardies and me been mad enough to run this?
Posted by Mike Whitaker at 16:03