Labels: rant, rules, thoughts
This question cropped up again recently - in fact, three times this past week - and I figure it's time for a longer rant on the subject than last time,

The question gets asked so often it's definitely a FAQ: "Will these rules work with X scale figures and will I have to change anything?"

There are four things you need to consider here. Figure scale, ground scale, basing standards (if any) and the intent of the designer. 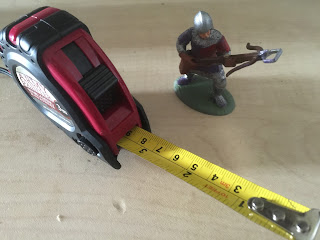 What do I mean by figure scale vs ground scale? OK, here are some examples:

For an example, Chain of Command's ground scale is 12" - 40 yards. Which is pretty much spot on the real scale for 15mm figures, and is why a LOT of people play it in 15mm. Scale compression, though, is a wargaming fact of life, because ranges are generally long, especially in more modern warfare, so there's no real problem playing it in 28mm, where ranges are effectively half what they should be.

Similarly, IABSM's ground scale is 12" = 100 yards, which is spot on for 6mm (and if you want to see just how awesome it looks in 6mm, check out Mark Luther's stunning gaming tables). But 15mm is decent enough - it effectively halves the ground scale which is still plenty. But I wouldn't play it in 28mm without some adjustments, for a number of reasons:

It's not to say you couldn't - but IABSM relies on moving by sections, and a 10 figure section takes up quite a bit of space in 28mm, which is where we come on to basing standards. Actually, IABSM doesn't have any (though quite a few folk use Flames of War style bases), but the point is that when compared to the ground scale, a 10 man section in 28mm is going to take up about 50 scale yards on the tabletop even ranked two deep. This, to my mind, is a bit much, and if I *were* mad enough to play IABSM in 28mm, I'd be looking at a much bigger table and probably doubling all ranges and movement, so that figures take up a sensible amount of space and ranges aren't stupidly short. Or, I guess, you could plonk 3-4 figures on a base and call it a section, but to my mind that's rather missing the point - see below.

Equally, I wouldn't play CoC in 6mm without some serious adjustment, since the ground scale is now bigger than the figure scale, and that's just flat out wrong. In fact, it's 2.5 times the figure scale, so one approach would be to try changing inches for cm on all measurements (which usefully reduces ranges and scales down to almost exactly 12" = 100 yards, the same as the figure scale), and move to a 3'x2' table.

There are some Napoleonic rule sets where a musket-armed line can only fire at targets directly ahead, If you change the ground scale, you will have to change the base width for a line to match, otherwise you'll break the intent of the rule designer. Pretty much any ruleset with a mandated basing size will fall into this category, because there will be some aspect of the rules where movement rate, range and unit frontage will interact, and you can't change just some of those.

Which brings us to point 4 - the designer's intent. CoC is intended to be a skirmish game (admittedly on the large side, but it is clearly platoon+ level skirmish) - you're looking at individual figures, not serried ranks of troops. While you can do this in 6mm, and I'm sure if you had next to no space you perhaps might have to, it again rather misses the point, in my opinion. By the same token, while you could replace every figure in Sharp Practice with a block of 6mm's, or a section in IABSM with 3 28mms, it wouldn't be the same. It wouldn't feel right. (That said, I have seen Bosworth Field done in DBM with 54mm figures, and for what it was trying to do, it worked.)

With that all said, here are a few key rules to consider when you start tweaking things:

There you have it. I feel better now :D
Posted by Mike Whitaker at 11:23