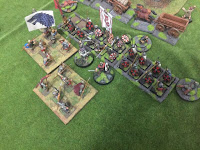 "We..." Aelfric's voice is dangerously soft, that low, intense tone that I think we've all come to fear. "We are become fat and lazy." Grey eyes flick round his men. "And we have paid the price."

I follow his gaze. Even now, Lavinia and a number of others are still adjusting bandages, poultices and the like on our battered band. It didn't go well.

The Young Wolf's hand grips his spear, bangs the butt on the low wooden dais on which he stands. Everyone - I confess, even I, and I'm half-expecting it - starts. "Fat. Lazy. Complacent " The words are snarled. "The best among you today were a beardless boy and a woman."

To be fair, that isn't quite true. His own hearthguard made off with one of the three wagons the British were driving towards their fort, and that unscathed. But... Sithric, by all accounts, felled a tall Briton with a swing from the butt end of his banner, and Lavinia and her small band of archers, with her usual calm efficiency, did their bit to draw the British into a spot of our choosing with no losses. The rest, however...?

I sighed. No. It didn't go well at all. And I'm not going to quibble over his choice of words. Not this time.

He's berated us before, and there have been mutters of disagreement. This time, there are none. All of us know it to be justified. Necessary. Even Ecgwine. A glance at the young lord's face tells me I won't need to knock sense into him on this occasion.

"Get up." It's a snapped order, and I note with a degree of pride that every man who can scrambles to obey so, even if they have to lean on a comrade. "Look around you. This is my hall. Our hall. Our home." Aelfric raises his voice, "We fought to win this. We will fight to keep it. But if we fight again like we did today, we will be headed back to Wulfhere's steading like beggars hoping for a roof over our heads and scraps from his table." A deep breath. "Is that what you want?"

A few mute shakes of heads, mumbles of disagreement.

The boom of the spear butt on the planks of the dais jerks those lowered heads up to him. "Is that what you want?"

It's Beornwulf. Wulfhere's own bastard son. Beornwulf, with his shield-arm strapped up tightly, who raises his voice from next to me, cuts through the sudden silence.  "No, it is not." He catches my eye for a moment, the slightest of nods, and I recall our conversation from the other day as heads tun to him. He, at least, tried, eventually having his band of warriors driven off from the wagon they were trying to lead away. Just the moment's pause as he realises he has everyone's attention, then: "We..." The stress on that word is subtle but unmistakable, "We will hold what is ours. We will take what the Britons claim as theirs..."

That earns him a chorus of agreement, and a curt nod from the Young Wolf. Snapped. "Good. Godric? Start drilling them tomorrow. Work out how to deal with that gods-dammed shieldwall of theirs properly. Learn how to fight in one if you have to."
OOC battle report to follow tomorrow. A tale of some pretty dismal dice rolling.
Posted by Mike Whitaker at 10:36