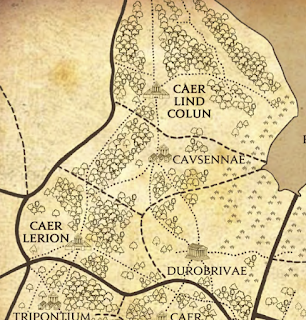 "It beats paying a tithe to my father, I suppose," Beornwulf admits, grudgingly.

"Aye." I look up at the rafters of the hall in Caer Lind Colun which has been our winter home for what seems like an age. Without thinking, I add, "Though I'd still trade that for him charging us for Leofric's mead..."

To his credit, the blond king's bastard doesn't balk at being reminded of the man he replaced. Thoughtfully, after a moment, "Aye. Wish I'd known him."

I grin across at him, answer what he doesn't voice. "You're doing fine. They've started seeing you as one of us these days, not your father's man."

A short bark of laughter. "Not that I ever was."

"Aye. True." My eyes catch Ecgwine - another king's son - and his raven-haired woman Lavinia. "Not the only one we can say that of." You'd still not mistake her for a Saxon, even though she's taken to wearing much the same as our lads do, bow across her back as the pair walk in through the hall's great doorway. That hair, glossy and dark as a blackbird's wing against his straw-pale locks, proclaims her as British - pure-blooded - for all to see. Or, it occurs to me, even Roman.

Beornwulf laughs.  "It's not his father that has a hold of that one."

"No. But...." She catches my eye, treats me to that quick, slightly mischievous smile of hers. "She seems to be good for him. Surprised they're not handfasted yet."

I frown, making a prompting noise, but he won't be drawn, looking up as our Cyning, Aelfric the Young Wolf crosses to us from where he's been talking to young Sithric.

"Ready?" Aelfric is grinning. Sithric, meanwhile, is hurrying across to Lavinia and Ecgwine, talking excitedly.

"Ready?" queries Beornwulf, with an amused glance at the young man.

"Mm." The Young Wolf bares teeth in a smile. "The weather omens are good. It's time."

I nod across at Sithric. "What's got into him?"

Aelfric chuckles. "I made him my bannerman."

I glance across at where the huge banner old Martha fashioned in our last winter in Petvaria, the grey wolf Fenris, hangs from the rafters. I know his mind is made up, but I still have to point out, as befits my position as the Young Wolf's conscience, "He'll have to get working on that beard, then..."
Here's a cast list, for those desperately trying to remember who's who. Characters marked with *'s are force Lords in the Dux Britanniarum game.

The Saxons:
The British: