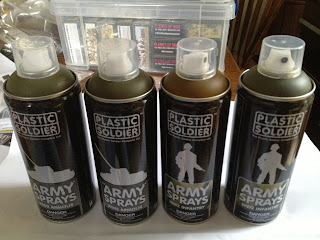 At least, that's what I assume they're called. The cans are labelled very prominently 'Army Sprays', but the supporting literature calls them "Warsprays".

Anyway - to the right we have British and US tank sprays as well as British khaki and German Feldgrau. Initial impressions? Cans feel slightly chunkier than the Army Painter ones, and are a damn sight easier to open.

The colour is indicated by three things: 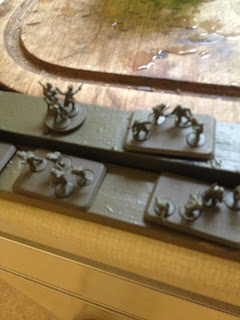 The only one I've tested is the Feldgrau, on a company's worth of 15mm Battlefront metals and plastics - in fact the force for the second scenario in the IABSM rulebook.

Covers well, sprays nicely, dries pretty fast (tens of minutes tops). If anything it feels a shade thicker and stickier than the Army Painter stuff its apparently based on, but this isn't a problem. Looks like it should be a decent match for the Vallejo Feldgrau should I need to do any touching up.

In summary? You need to paint WW2 stuff? Go out and buy some! Does what it says on the tin :D