Labels: age of arthur, battle report, battlegames, club, dark ages, designing scenarios, saxons, tournament, WAB
Sunday saw our club put on a WAB Age of Arthur day at our venue. In the end, we had 14 players turn up, a mix of our members and folks from further afield - the venue could, with a bit of a squeeze, hold 24, so there was a reasonable amount of room. 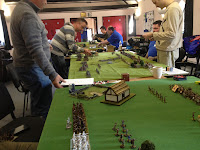 The players were split into two factions, the British (with mercenary allies) under Vortigen, and the Saxon invaders under Hengest: we diced for leaders, and issued them with crowns. Format was three rounds, the first being three sets of doubles plus the leaders (Scrivs as Vortigern and Phil from the Halifax club (the Pennine Raiders) admirably cast as Hengest) in single battle. I paired up with Stephen (also from the Pennine Raiders) to take on the worst Britian could throw at us (which turned out to be Reuben and AndyB from our club!).

It all went OK (ish) for the first three turns, but turn four saw an awful lot of damage done to the combined might of the Saxons and a lot of failed tests, despite our best efforts, and we wound up on the receiving end of a Mighty Victory to Britain. Which rather set the pattern for my day, sadly. 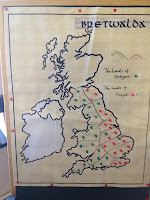 After a quick dash home for the scenery I'd forgotten, we set up the tables for two rounds of singles for the afternoon. The plan here was that each leader was given the scenario sheets for the seven different tables, and had to allocate a player to each table for the second round, and then a different one for the third round. Most of the scenarios were out of the Age of Arthur rulebook, but we added a couple of Andy Hawes and my devising (The Old Roman Signal Station and Our Lady of Wansford) and James Morris' Battle of Chester scenario. 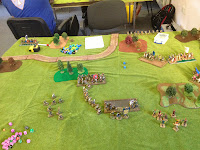 For the second round I got assigned Cat Coit Celedon against Vortigern himself, Scrivs. This basically requires the attacker to punch a hole or two in the defender's formation and make it off the table. I almost managed it: my cavalry vapourised in the face of some remarkably unpleasant double-shotted sling fire, but I did get two units of Duguth headed in the right direction. Except that, due to a complete bit of tactical idiocy on my part, I'd got my hearthguard rather firmly stuck behind some fleeing Geoguth, and in no position to charge. So when Scrivs charged them and they broke, fled and died, my army proceeded to fail its tests, and ... yup, another Mighty Victory to the British. 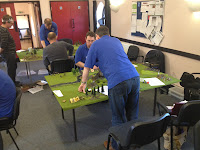 Last up I got Grahame from our club's Franks in the Mount Badon scenario, which I picked largely because it was the only one of the seven I'd never played. Looking at his forces, and really not wanting to attack uphill against thrusting-spear armed Franks, I decided I'd defend the hill: at this point (in order to make the 2000pts vs 1500 pts the scenario calls for) my cavalry defected to Grahame. 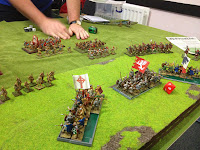 It so nearly worked. I spent four turns resisting the temptation to leave the hill. My reinforcements obligingly turned up on turn four, and proceeded to charge what used to be my cavalry... which actually worked out quite well, as they fled, causing a bit of a logjam for Grahame. By turn 5 I'd lost a unit of Duguth and both my skirmishers, and was poised to charge my Gedriht off the hill and hopefully turn a close-fought victory... except that Grahame unloaded on my Gedriht with every missle troop he had, and did 6 out of 24 casualties. A panic test. They failed. And fled. 11", which was about 3/4" too far for them to stay on the table... You can guess the rest :D 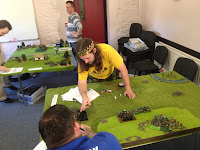 All in all, though? It was a brilliant day - I had a blast, and it certainly seems that everyone else did. The British won the most territory, despite some sterling efforts in the final round after a pep talk from Hengest, and there was a three way tie for the mightiest warrior, resolved in favour of Andy Beer who actually managed three Mighty Victories. Thanks to everyone who came, to Andy Hawes for being organiser in chief and MC ("Yet more interesting NEWS, gentlemen, from the Land of Britannia!"), and to everyone else who helped. 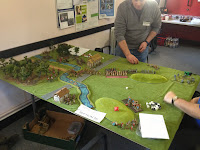 I'm also very pleased to report that the dice-off for various goodies, including a bottle of mead and some of the very nice new Musketeer character figures, raised £65 for the Battlegames Combat Stress Appeal.