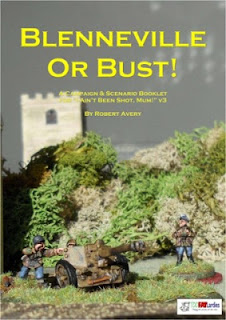 Ever wanted a nice company-level WW2 campaign with a decent level of context and story behind the games, without massive amounts of bookkeeping but with replay value?

"Blenneville or Bust" is a new campaign supplement for I Ain't Been Shot Mum 3 by Robert Avery, and it rocks. I've had it for a couple of days now, but I figured I'd hold off on a review till I'd read it more thoroughly.

300 (no, that's not a typo) pages of campaign info, as a downloadable PDF. There's an intro to the campaign, which is set in a fictitious chunk of Normandy not long after D-Day, a raft of 6'x4' wargames table maps corresponding to key locations of strategic interest, a decision tree, and thirty one scenarios using the various maps in various directions with various forces.

The whole think is a linked narrative campaign with a slight nod to a Choose Your Path To Adventure book (sorry, Robert, just teasing!). Basically, you fight scenario 1, and depending on who wins, you go to 2a or 2b, and so on. There's a bunch of forces in the area with complete orbats, with some only-slightly-annoyingly-named Big Men (the Lardies' penchant for 'funny' or 'themed' sets of names is my one real peeve with many of their publications), and even a table that you can use to figure out a shopping list at your choice of wargaming emporium. They're well-designed scenarios, with clear objectives that (obviously) tie in to the campaign, and each comes with about 8 or 9 pages of briefing, split between one for the Allies, one for the Germans and one for the umpire, ready to print out.

Yep - you're gonna need an umpire (although you could maybe squeeze by without). Personally? I don't consider this a downside - I've been umpiring IABSM at the club for a couple of games now, and I actually enjoy it almost as much as playing.

Gripes? Apart from the slightly naff names, the maps leave a little to be desired graphically, in my opinion. But you don't, in general, buy Lardies' stuff for supremely glossy GW/Battlefront presentation values, and the maps are more than amply clear enough to lay the battlefield out on a table (though I am wondering how many feet of bocage in 15mm I'm going to need!).

These are, though, minor gripes, and don't detract from the meat of it, which is that it's a superbly put-together resource. There would be nothing to stop you using it with a fairly wide range of other company-level rulesets - not for me, but whatever floats your boat. :D The fact that it's a PDF is actually an advantage - as I said before, you can print off specific pages of briefing for each side (as well as maps) as and when you need them.

I for one aim to see if I can run through it for some of the IABSM players at the club in 2013, so watch this space for write-ups! Unreservedly recommended.