So, having reached the end of the month with, to my considerable surprise, some money left, I grabbed a couple of boxes of the Napoleon at War figures - specifically the French foot artillery and the light cavalry brigade. They arrived today, in a surprisingly heavy (yes, I know - I'm used to Warlord / Wargames Factory / Conquest Games plastics. Sue me!) and small (18mm, not 28mm) box.

And here's what you get - apologies in advance for the less-than-perfect iPhone camera pics.

Good looking boxes - the back contains a parts callout and a very basic but useful painting guide: there are front and back pack shots on the Man At War store site, so I won't bother reproducing them here.


The box claims 2 regiments, and 2 mounted officers, which is, indeed, what you get. It breaks down as 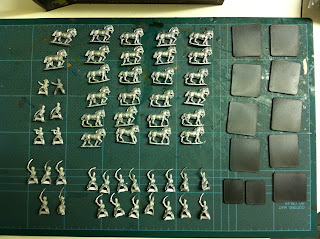 These are all packed in a two-compartment clear plastic tray with some foam padding: a few sabres were bent, but nothing too serious. I gather that some infantry boxes have arrived with broken muskets and bayonets, though.

The bearskinned troopers are, I assume, for elite squadrons - as there are only 5, I guess I'll be basing 3 on a base, and the odd two each with the trumpeter and unit CO on the command base.

Moulding detail is excellent, but I'm not going to put any detail photos out this time round - once I get the DSLR charged and the figures undercoated, I'll stick up a round of photos. 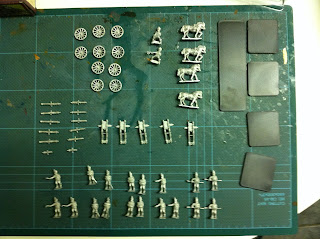 What it doesn't contain, and is visible on the box, is the trail axle and pair of smaller wheels for the limber. Whether this is an oversight in the box art or the box contents, I don't know.

These are great, and (despite the fact that they're a LOT smaller than the stuff I'm used to painting) I'm really looking forward to getting some painted troops for Napoleon At War. Watch this space for the next stages.
Posted by Mike Whitaker at 20:14