First up, of course, there's COVID. I am, I confess, monumentally blessed in that my working life for a sizeable percentage of the last two and a bit decades, and certainly the last couple of years, has allowed me to do the back-end Perl development jobs I do from home, so lockdown, while it's taken a bit of getting used to, hasn't required that much of a lifestyle change. Well... barring a few things of which more later.

My employer (well, their parent company, really) fired me in March: nicely timing it so I couldn't sue them for unfair dismissal by about a week. Frankly, I was glad to be rid of them, as even the original folks who understood the system and hired me in 2018 were apologising ("this is not the company we hired you to work for") and one-by-one leaving as well. (The last one left a month or so ago, and i think it may finally have dawned on someone that they are, in a nutshell, screwed,.) I managed tot land a contract at the beginning of May with GoDaddy, who are everything the previous lot aren't - an absolute joy to work for, and I'm anticipating some changes on that score in April 2021 which will make it even better,

Obviously, face-to-face gaming took a bit of a hit. We took the sensible but painful decision to shut down regular club meetings as soon as lockdown hit, and (unlike at least one other local club) resisted the temptation to re-open in the summer, not least because our venue (the local St. Johns Ambulance) wasn't prepared to let us. We have, though, managed regular (weekly) Zoom chats every Monday, usually with some mix of show-and-tell and on- and off-topic chatter (and thanks to Grahame, a couple of quizzes, which Carl won by a mile!).

Hereward Wargames Show, likewise, had to go virtual: if you missed any of the items at the time, they're all on our YouTube channel. Huge thanks to everyone who helped, especially the folks who dived in for a last minute round-table discussion on the future of historical wargaming. 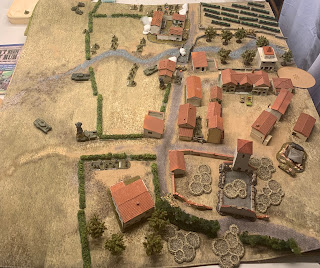 Wargaming sanity was largely saved by the fabulous Virtual Lard games organised by Jeremy, where I ran some Dux and some IABSM, which was both fun and useful. IABSM with limited player view over Zoom was fascinating to umpire, in particular - see the 2020 Lard Mag for more.

I managed to get a group of play testers together to hammer on the Dux Britanniarum Compendium scenarios, to whom many many thanks for helping me iron out a bunch of kinks in deployment rules. especially for one particular scenario! As to the Compendium itself... well...

A very large amount of m free time has gone on video editing work for Werrington Parish Church. For the spring, until we managed to get a team together I could offload stuff to, I was spending most of my free time editing (fortunately when I had no job!), and once I got to delegate, I moved on to just editing the music, which chewed up Friday and most of Saturday (as well as some cat-herding earlier in the week). I think that Dec 25 was the first Sunday or holy day since March 22 I didn't do anything for church (the vicar made me take three weeks off over Xmas!)

It dawned on me sometime in Autumn that there are different head-spaces for different things, and it's possible to run out of free time/desire for them at different times. Specifically, my video editing and rule writing/editing brains seem to be the same one,  and by the time I have done the week's video, I really don't want to use the analytic/editor side of my brain any more. The Compendium is really down to the nit-picky stuff that's very like editing video, in fact.

This is, oddly, different from the pure creative side of my brain: I may not be motivated to work on the Compendium, but creating and running a D&D campaign (and playing in a couple more) seems to use a different chunk of resources that I don't run out of at the same time. We are, though, managing to put together some processes at church that may give me some of that headspace back, so who knows - there may be a tentative Easter deadline for the Compendium yet!

Painting wise? not a lot. I did a bunch of buildings for one of the Virtual Lard games, as well as a couple of vehicles, and I have a vague memory of painting some figures, but I'm blowed if I can remember what for :D I did just acquire some Reaper gunslingers for What A Cowboy, though!

Podcast: um. No. That's audio editing! No headspace, except for actually taking some working days off to do Hereward!

Some day I am going to figure out enough hobby income streams to retire from the software business, I swear!

That was not what any of us expected!

Stay safe (please, don't think you know better than the health professionals: I like having my friends and readers around), and may your 2021 be better than 2020.