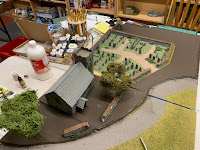 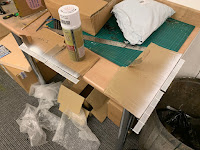 Today I managed to find the white AP spray and undercoated the fences white (rather than green). I also worked out a force list for the first episode of the club's Kings of War/Vanguard campaign, which may mean I have to rebase my Shieldwolf shield maidens on 20mm bases (and paint at least a few more).
Posted by Mike Whitaker at 21:50