Labels: dark ages, dux britanniarum, godric, series, to britain's shores
"Where's Leofric?" It was, surprisingly, Lavinia who asked, flushed and a little breathless from our run. She and the lads, at least, had had some success, managing to find some pickings in one of the farm buildings before we'd left.

I leant on my sword, still trying to catch my breath from the hasty retreat Aelfric had called from being pretty much surrounded by most of the British force. It had started off well - Ecgwine's little group had headed for the village at speed, and the British had, it seemed, been off on a patrol elsewhere, as a group of them headed by the Tribune Andrusius (him, again) turned up the wrong side of a copse of trees and some marshy ground. Aelfric left Leofric's group of warriors to jump them as they cleared the marsh, and he and I and the hearthguard headed for the farm, expecting more Britons to meet us there.

The last I saw, or rather heard, of Leofric was him taunting the British at the top of his lungs as they struggled out of the marsh, a glance over my shoulder as we headed for the village. We turned once we'd got there to charge another group of Britons, led by that short Decurio of theirs - Maximus Minimus, I think his name was. Should have been easy pickings for us - we've fought his lads before and they're the rawest of the Britons. Time was the killer, though - we took too long dealing with them, by which time their big Tribune and their man Geraint joined in the fight, and ... well, frankly, I was too busy making sure that Aelfric, Beornwulf and I kept our heads attached to our shoulders to worry about anything else. Beornwulf is more than useful with that blade of his - he and Aelfric wrought some serious havoc amongst the Tribune's men, but in the end, the fact we were outnumbered two to one and surrounded on three sides was always going to be our undoing.

"Where's Leofric?" Lavinia asked again, a little more urgently this time, pushing a strand of damp hair off her face.

Aelfric opened his mouth to answer, before the sound of cracking branches caused him to turn. It was Theobald, grizzled old Theobald, who this time out had decided Ecgwine was becoming man enough not to need babysitting, and returned to his usual post at Leofric's left shoulder.

It was Theobald, carrying a mail-shirted, bloodied body across his shoulders, himself likewise bloodied and bruised. He let it slide from his shoulders to the ground, staggered and reached for a tree for support.

Aelfric looked across at me for just a second, stricken, a silence broken by a choked-off sob from Lavinia, before he drew a long breath. "Beornwulf, Godric, take him." He strode across to Theobald, lending the veteran his shoulder for support as we picked up the lifeless body of Leofric, and for a moment the Young Wolf sounded old beyond his years. "Take him home."

We got spectacularly drunk that night, and shared tales of Leofric until the sun rose. Wulfhere had us all howling with laughter at a story involving a very drunk Leofric (strangely enough, a lot of those stories involved Leofric bring very drunk!), a peasant girl and two pigs. Apparently, both the pigs were better looking, according to Leofric - either way, Lavinia turned an interesting shade of pink by the time the tale was concluded. Even more so when we started speculating on what he'd be getting up to in Valhalla.

As the sun came up, Aelfric came and sat by me, offering his drinking horn. I shook my head. "Had enough?"

He leant back against the wall. "My fault."

I shook my head. "He knew the risks."

"Maybe. Theobald thinks it's his fault for not protecting him better." Aelfric contemplated his horn, shrugged, and with a decisive move tipped it out onto the floor of the hall. "But I was stupid to think they could take on that damn Tribune and his men without us."

"No you weren't. He had the edge on them coming out of the marsh. If it had gone like it should have, we'd have taken that damn dwarf as well, before we got surrounded."

"But it didn't." Aelfric looked across at me, asked, quietly, "Godric?"

"Mm?" I had a feeling I knew what was coming.

I sighed. Told you. "Yes. They'd follow you anywhere, and you know it." I frowned, tried to clear my head of the mead I'd downed earlier. "Give up now and we might as well not have come here in the first place, and we make his death, all the others, a waste."

He nodded, soberly, looked down, away. "Maybe you're right."

I gripped his shoulder, made him look back at me. "I am right. You keep me around to be right. Even when you wish I wasn't." 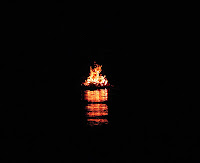 We gave him a fitting pyre, the body laid out atop a stack of dry wood on one of Wulfhere's boats on the estuary shore, his sword, his shield, his favourite drinking horn and a whole barrel of Wulfhere's best mead among the things we laid with him. We pushed him out into the current, and at a signal from Aelfric, several of the younger lads let fly with flaming arrows.

As we watched the flames grow, and the current take the burning boat, I asked Aelfric, "What would you have done if they'd missed?"

He grinned a little. "Swum out and lit it myself. Leofric would have loved that. Anyway, it was Beornwulf's idea. Seemed to think it was an appropriate thing to do, and he was raised by a priest."

I glanced across to where bows were being unstring, noted one head of long dark hair. "At least you knew one of them would hit."
Posted by Mike Whitaker at 09:27