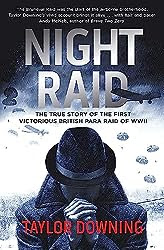 To give it its full title, "Night Raid: The True Story of the First Victorious British Para Raid of WWII

", by Taylor Downing. It's the story of Operation Biting, the paratroop raid on the German Würzburg radar facility at Bruneval in northern France.

Actually, it's quite a bit more than that - it starts off with the para drop, and then flips back to cover the history of radar before and during the war, the set up of combined arms operations under Louis Mountbatten, and ranges widely about just about anything that's even remotely connected to the raid. To be fair, the raid itself would probably only merit a short book, maybe three or four chapters, but the surrounding context makes for fascinating reading (or in this case listening).

If I have a gripe, it's that the author seems to forget what he's written, and if, for example, he needs to mention an event in two different chapters in two different contexts, it's covered the second time as if he'd never mentioned it before. If I did that in an essay I'd have been accused of padding. :D

That aside? Cracking story, and one I quite fancy trying to war-game. The audio book is read by Gordon Griffin, which is pretty much all you need to know: clear, well-phrased, subtle \character' voices, well up to his usual standard.

Well worth a read or a listen.
Posted by Mike Whitaker at 22:32