Grahame at the club last night brought Osprey's "Of Gods and Mortals" rules for a tryout, so Carl and I got to play.

OGAM is loosely based on Song of Blades and Heroes, which I freely admit to not having played, though I know Neil of Meeples and Miniatures is rather fond of it. I pitched a force of Greeks headed up by Ares, God of War against Carl's Celts - perhaps with hindsight we should have gone with smaller forces, but either way it was a decent introduction to the game. 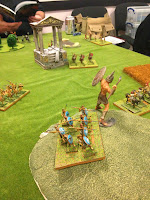 The core mechanic's quite cute - when it's your turn you can pick a unit and roll 1-3 d6 activation dice, looking to equal or exceed the unit's Q (Quality) rating. For each success, the unit gets an action: if you fail once, the opposition get a reaction with a unit of equal or better rank (Gods > Legends > Mortals). If you fail twice, your turn ends, otherwise you can carry on with another unit. 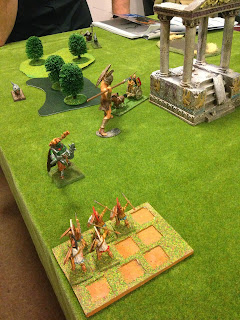 Your mortals can add extra dice to your God by sacrificing their activation for an Invocation - if they succeed he or she gets bonus actions - additionally, if your God loses in combat and is 'killed', an Invocation can bring him or her back. If all your mortals die, you lose (other victory conditions are available, but I don't own a set of rules yet!)

I suspect I was probably still a bit fried from the general anaesthetic on Saturday, but I found the rules somewhat unclear (and badly indexed/cross-referenced) in a number of places. Action is very fluid - battle lines didn't tend to form much if at all, and this isn't helped by the 'you can set up anywhere not within 2 x Medium moves of an enemy unit' rules.

I'm still not sure about it as a system. It was good fun (and for once I won!), but I found it a little tricky to follow in places. It probably benefits another game after another read of the rules, and I'll buy myself a copy before I do!

And if anyone can explain why Short isn't half Medium, i'm all ears!