So. Back from church, mug of tea, comfy chair. Time to ponder Salute.

Come back with me to 5.30 am yesterday. Which is far too early, especially since my body clock (in 'must not oversleep' mode) has had me awake for 40 mins already. Shower, grab breakfast and the first of more than the usual number of coffees, remove two seats from car, and load up from the checklist.

Discover one of the telegraph poles has broken. Grr. Fail to grab the small pile of road signs on the painting table, and equally annoyingly fail to grab the big yellow file box on the kitchen table. This latter had a few vehicles and some livestock in it from Grahame at the club, and was dropped off during the 30 mins I was out on Friday... which my son failed to mention had been dropped off, my wife assumed I knew about, and I failed to recognise as Grahame's. Communication. Gotta love it.

Off at 6.30, pick up Grahame at 6:45 (with obligatory 'did you get the box I left for you?' conversation!)), Chris at 6:55, and we're at Excel by 8:15. A bit of a gefuffle before we find the traffic office, get our red pass and get directed up the loading ramp (I'm forced to assume that the Excel assumes that if you should ever need to deliver/collect from one of the halls, the precise knowledge of the process will be magically transferred into your brain). The great thing about the Excel, though, is that you do wind up parked right NEXT to your table/stall for unloading. More about loading later.

Carl and AndyM arrive not long after, just as I'm taking the car off to the car park. Pro tip: you want Orange car park 3 for quickest access to your vehicle after the show. More about that later. 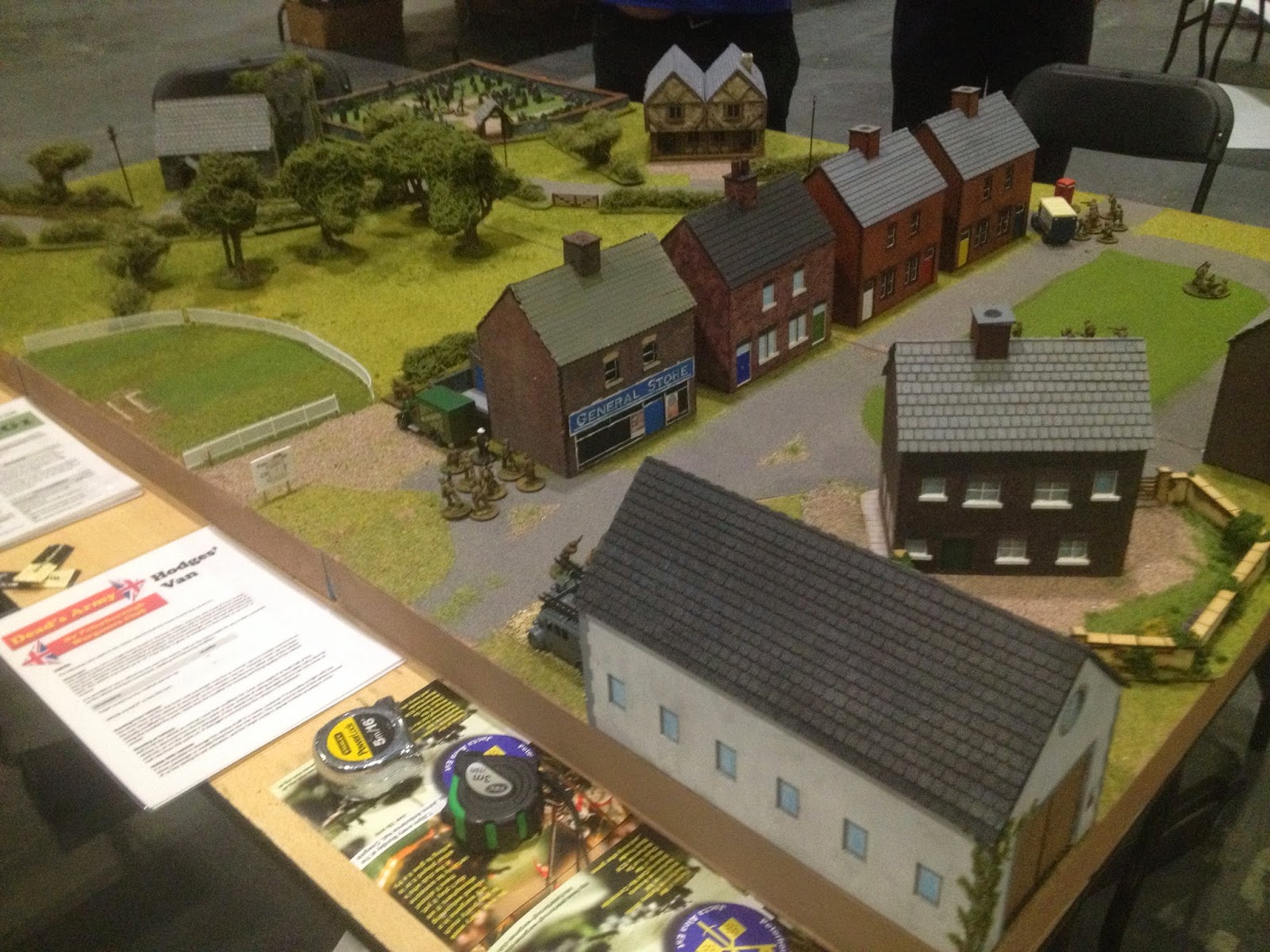 And here it is - the finished result in all its glory (minus road signs and cattle). We'll probably do some retouching of doors and windows to a consistent style before next time (there will, I'm sure, be a next time). Our huge thanks to Warbases for the bulk pricing on the absolutely fabulous buildings. Credit also to Last Valley for the trees and hedges (from the club's stash), 4Ground for an awful lot of tiles (the General Store is tiled with Warbases tiles, but I found after a while I preferred the 4Ground ones), pmc.games for the manor house, Mantic for the zombies, Wargames Factory for the Germans and Foundry for the Home Guard. 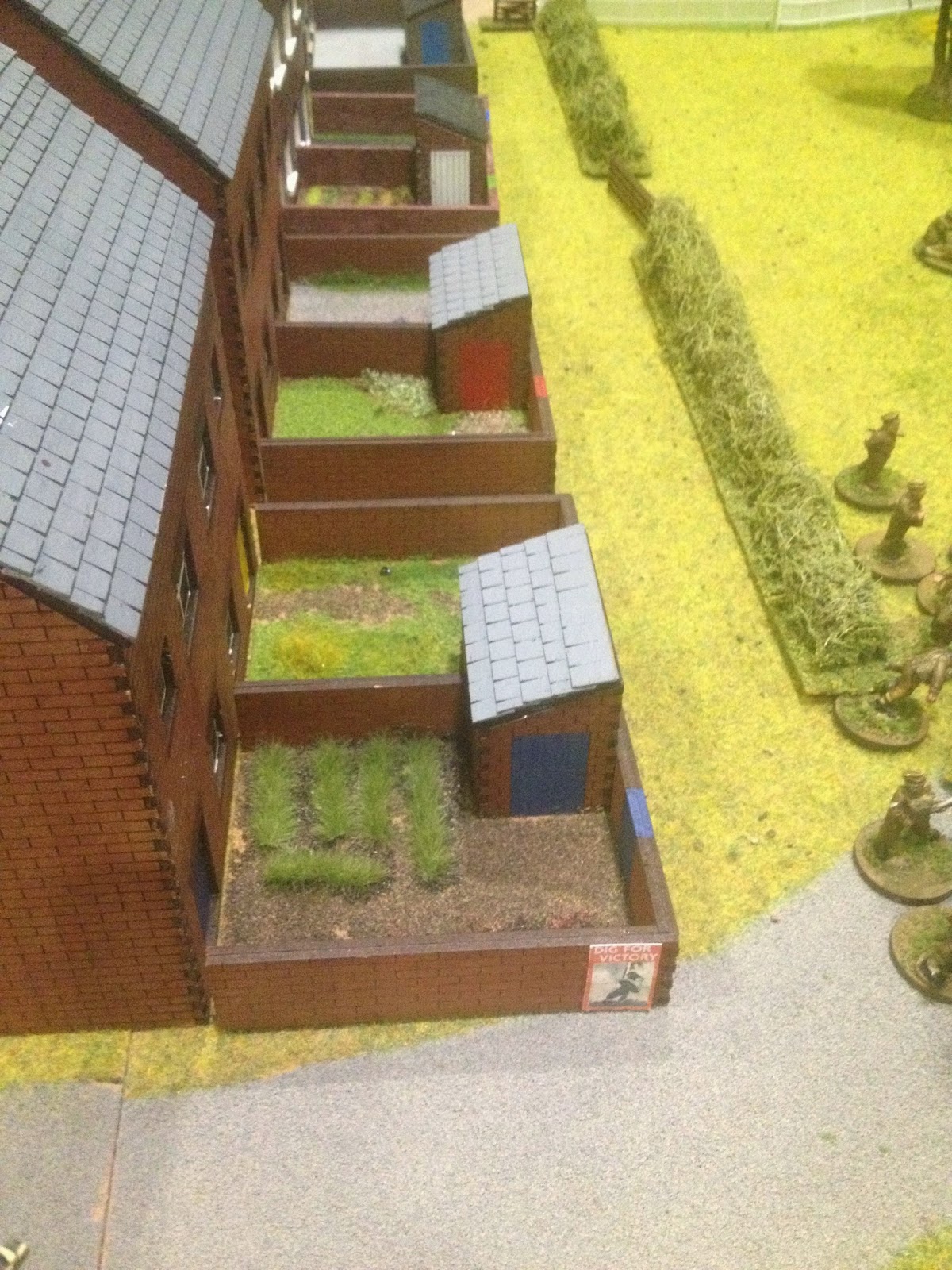 Here's a better look at the backs of the Warbases terraces.

All very painless to put together, and so English :D the gardens were great fun to do - second building from the back was AndyM, which I took as inspiration for the front two. The nearest is all dug to vegetables, complete with Dig For Victory poster on the fence. We joked that this was passive-aggressive motivation for their next door neighbour, who has a scruffy wilderness of a garden (a man after my own heart!) and would have had a goat or a sheep if I'd remembered the yellow box file!

You can just pick out a Warbases five bar gate in the hedge (hinged on a cocktail stick stuck into the foam board), and a Warbases stile at the end of the path along the backs of the houses leading to the cricket club car park. 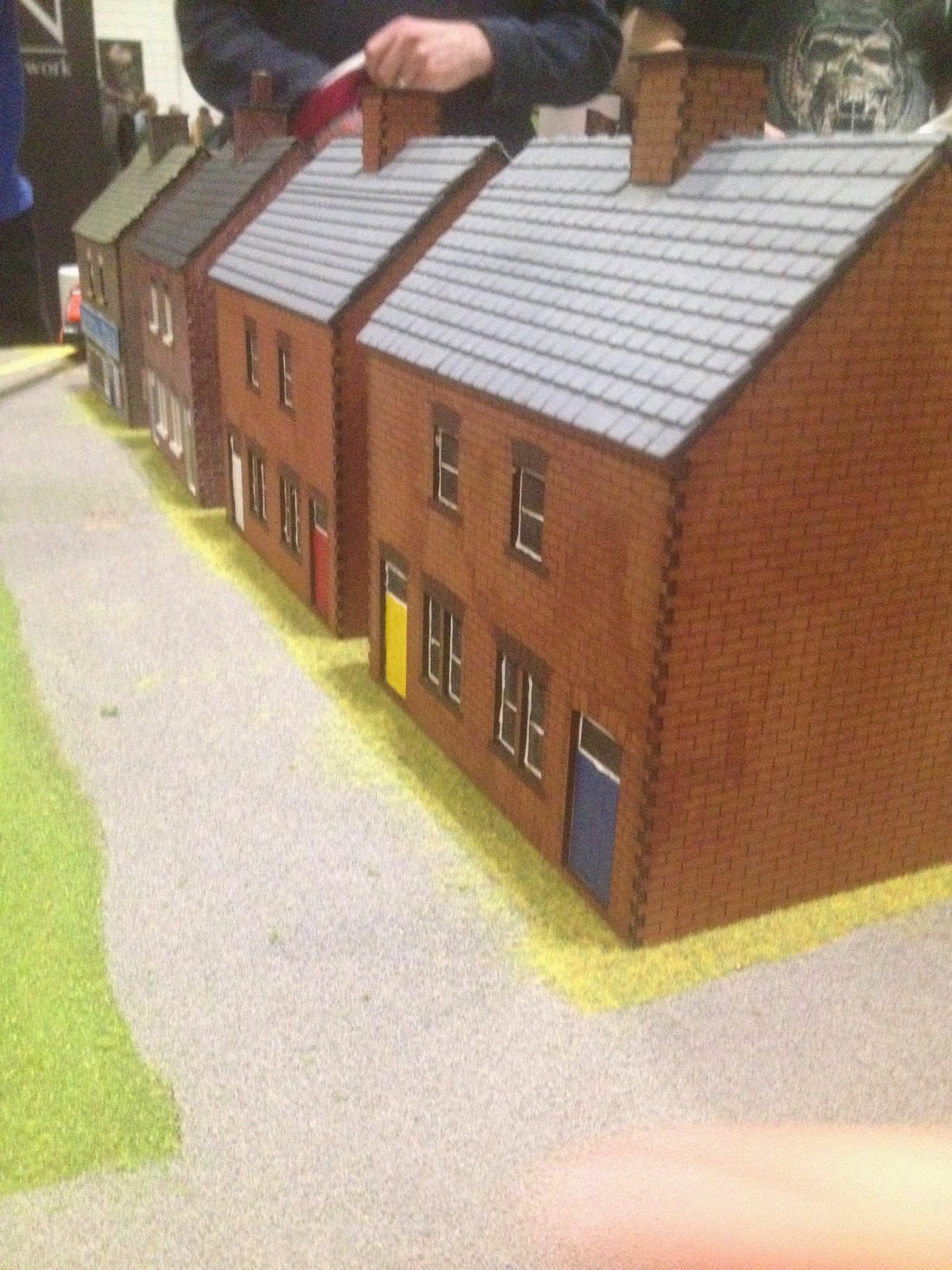 Front view of 1-8 The Green, Walmington Parva. Nearest two painted by Grahame, then AndyM, and the General Store by me.

For next time, I intend to build some little sabot bases to go under each building out of plasticard, with pavement in front and down the alleys between.

Also needing a retouch before next time are the chimney pots - you may notice Andy's are better than the rest :D 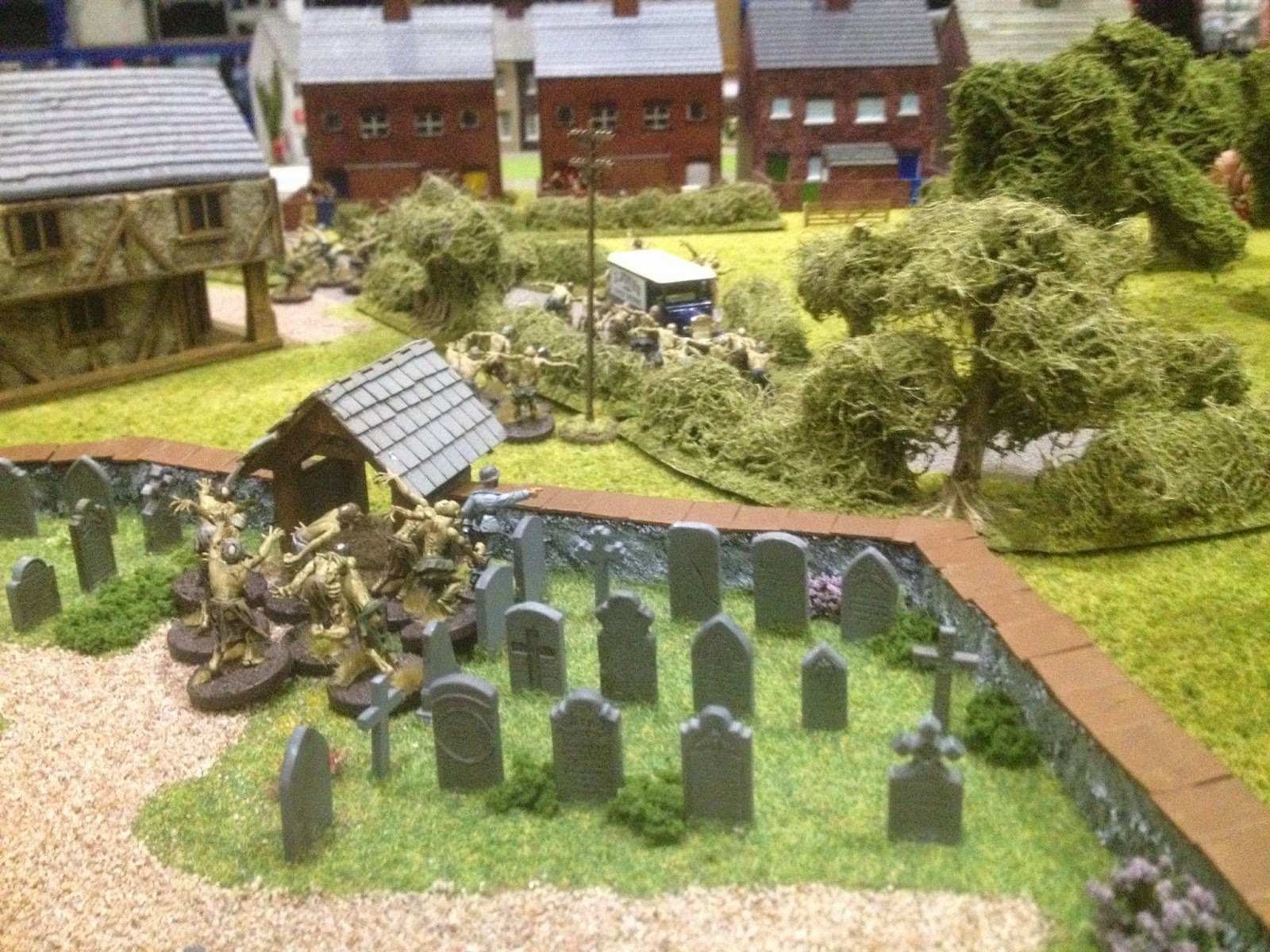 Up at the far end of the village, past the manor house, we have the cemetery and the church.

The cemetery was pretty much built by Rob, barring the lych gate which I knocked together on Friday from two coffee stirrers, some square section balsa, a few bits of plasticard and some left over 4Ground tiles. The gravestones are Renedra (the Renedra guys were very taken with the end result!), the walls are scratch built, and the landscaping is the usual mix of Javis and other products. 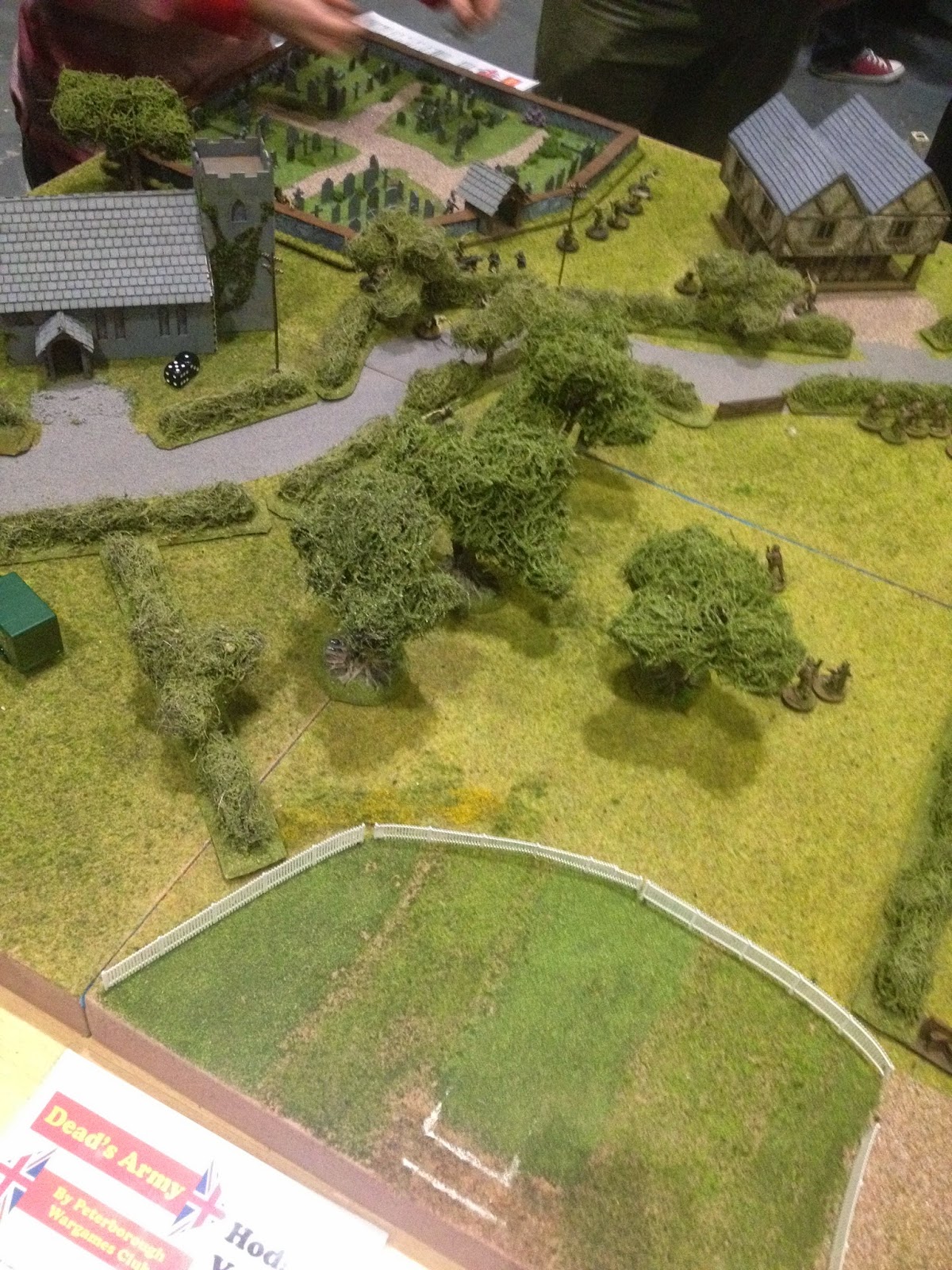 The church is Warbases again, liberally ivy-ed with a roughly 3-1 mix of Woodland Scenics coarse grass scatter and earth flock onto superglue. Anyone who's ever tried to remove ivy from a wall will appreciate that it's a tenacious little bastard, and leaves fine bits of stems and the like marking the wall - the earth scatter in the mix does this rather well.

The cricket ground is a whimsical addition - I freely admit its too small, but it was fun to do. The fences are Ratio GWR station fencing in OO scale: each end is superglued to a panel pin which can be stuck in the board.

Eagle eyed players would notice that someone has pasted a 'Careless Talk Costs Lives' poster over the 'Walmington Parva Cricket Club' sign (just out of shot). The sign is two bits of wooden meat skewer and a piece of plasticard, again, stuck into the foam base.

We get our first players by about 10:15, by which time I'd already snagged some flyers from Warbases' stall, picked up my and Andy's copies of Dux Raiders from Too Fat Lardies stall and collected a pre-order from Dave Thomas (Crusader early-war Fallschirmjäger) as well as a couple of blisters of Perry Yorkist command.  I also picked up the first batch of my Winter War Kickstarter Finns and Russians from Baker Company, which are sadly about fifth down the painting pile. Also passed by Scrivs', Tom W-D er al's rather immense and awesome IABSM game, featuring a serious piece of terrain building - the hill was almost head high on me, and I'm 6'2"+. Briefly ran into Neil from Meeples (twice, once with Jake Thornton - it's really weird recognising someone by their voice alone), Henry Hyde, Chris Hall (showing off 4Ground's amazing Dead Man's Hand buildings), TimD, Roger B-W, and any number of others. 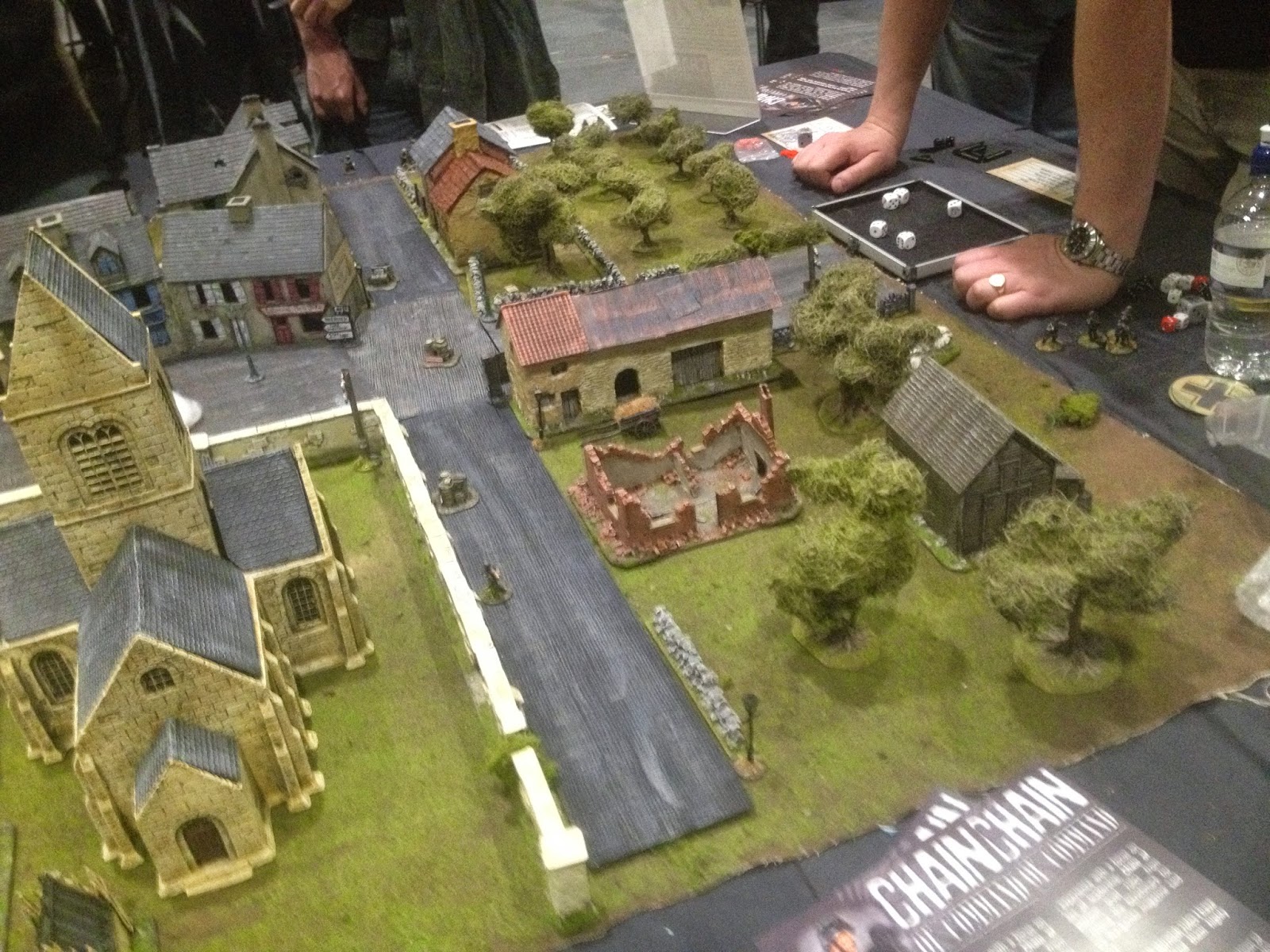 At 12 there was a gathering at the Lardies' rather superb Chain of Command demo.

If you want to know a bit more about how this table went together, Rich has a series of posts up on the TFL blog chronicling the process. Well worth a read. 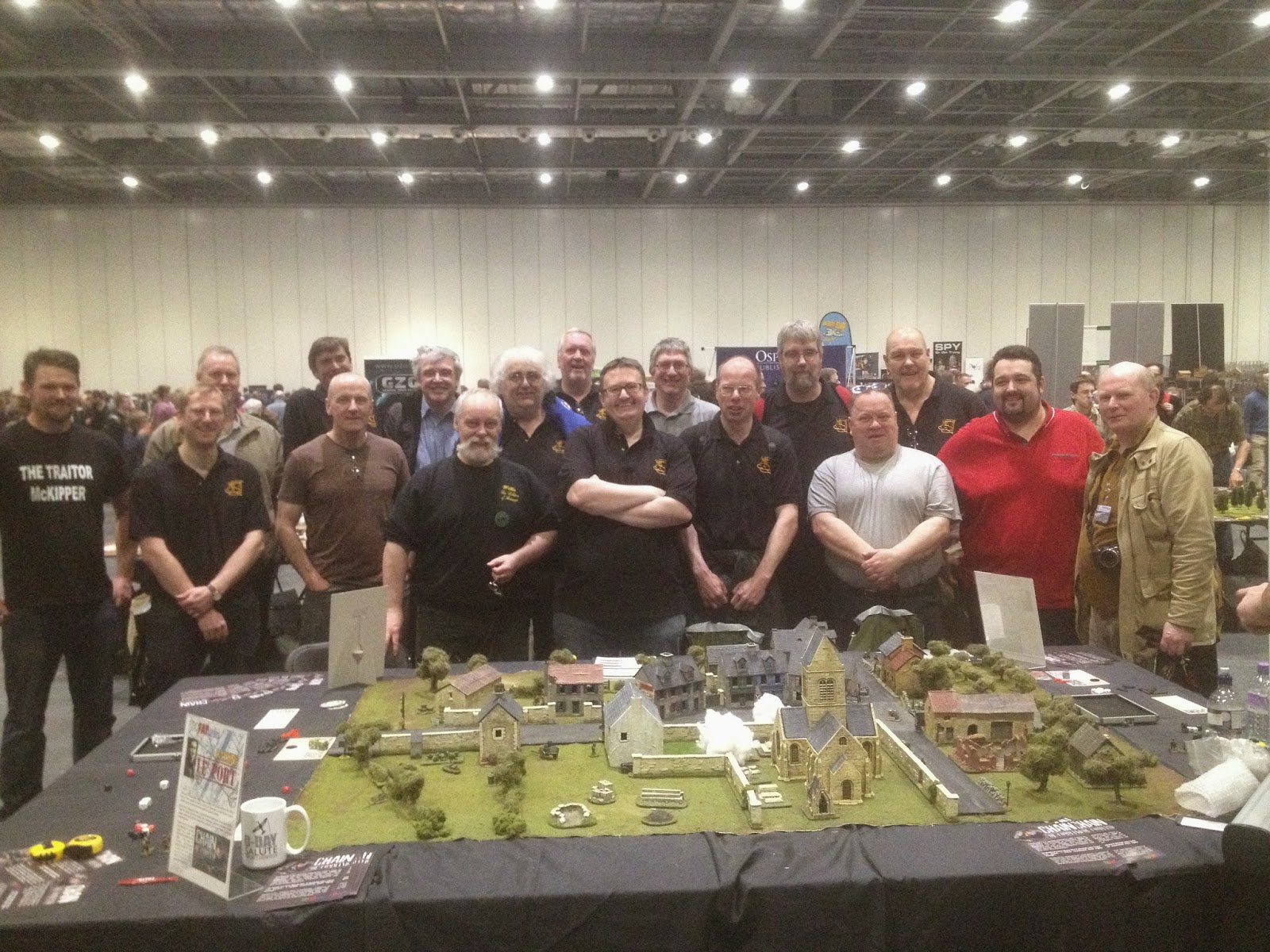 And here's the gathering of assorted folks from the TFL Yahoo! group and forum. Thanks to Roger Bell-West for the photo (on my iPhone).

Takeways from this, BTW - for all that a 6'x4' game will fit on two of Salute's 6'x2'6" tables, three's definitely better in terms of having space to store papers, dice etc.

Back to our game for a bit - I was kind of in and out for the morning, what with catching up with various people, and at 1pm it was bloggers' meetup time. I've lost track of everyone I met, but I did finally get to talk to as well as meet (we didn't talk at last year's) Ashley, and finally meet as well as talk to (we talk a LOT on Meeples) Mike Hobbs.

Final round of purchases: a very big raid on 4Ground for most of a 15mm French town (I broke their top discount bracket, which got me 25% off) - I did forget to pick up their colour-matched paints, since I do have certain opinions on their buildings, and I will be needing said paints later. More on this in another post.

I also popped by Stafford Games, picked up a couple of discounted boxes of Napoleon At War figures, two Wings of Glory planes, a pot of Vallejo Lufwaffe camouflage blue for the Fallschirmjäger and had a chat with Walt from Commission Figurines. 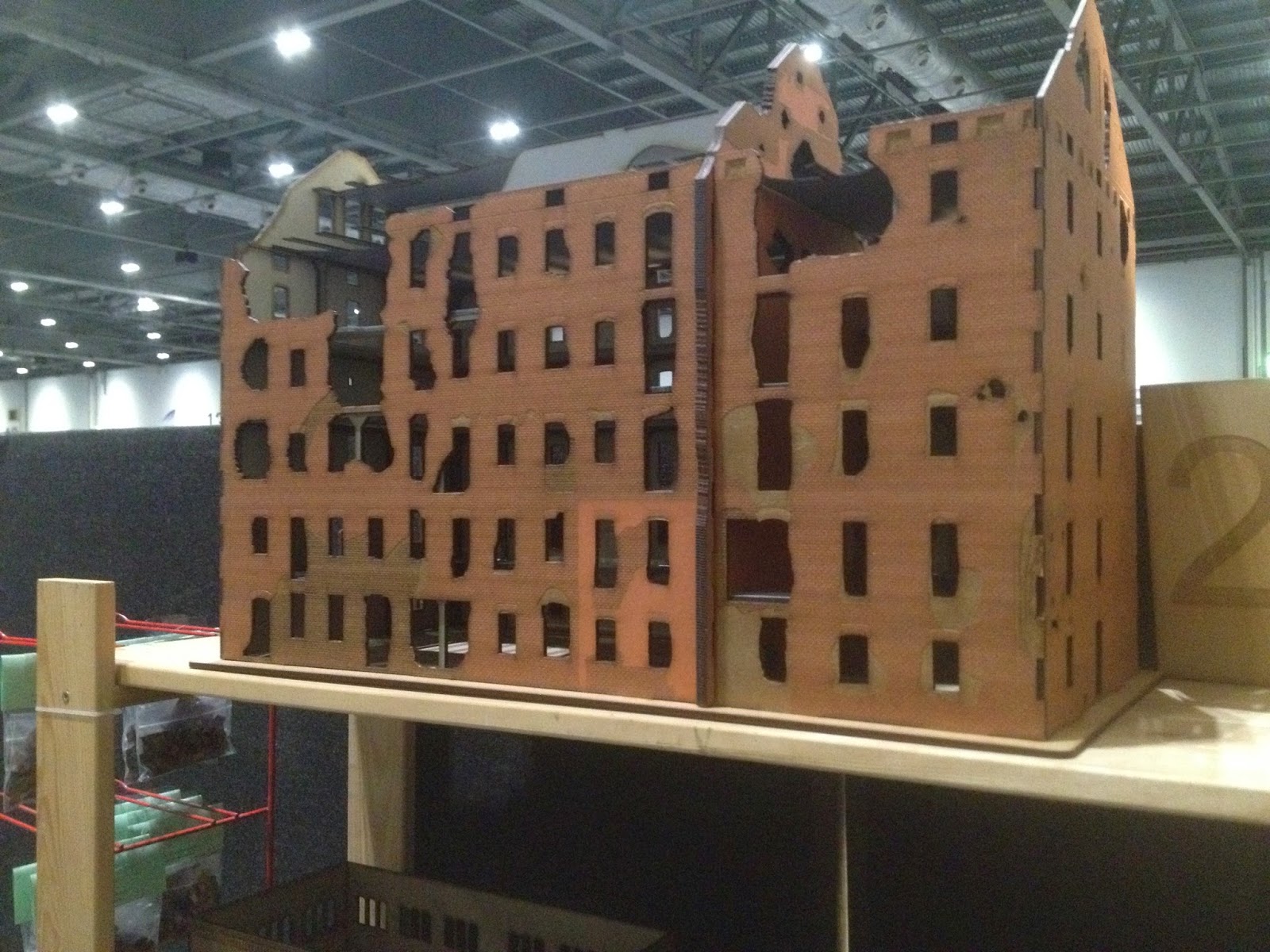 He had the 28mm Stalingrad Steam Mill on display.

For scale? it's a over a foot high.

And the roof comes off, and there's places to park figures by nearly every window.

Our club's copy of it is on its way just as soon as he's ironed out the last of the problems.

Back at the Dead's Army game, we got in a total of five games during the day: with hindsight, we could have made more of the running 'lost episode of Dad's Army' gag :D And possibly running a competition for seeing home many rules mechanics from various games you could spot that we'd stolen! 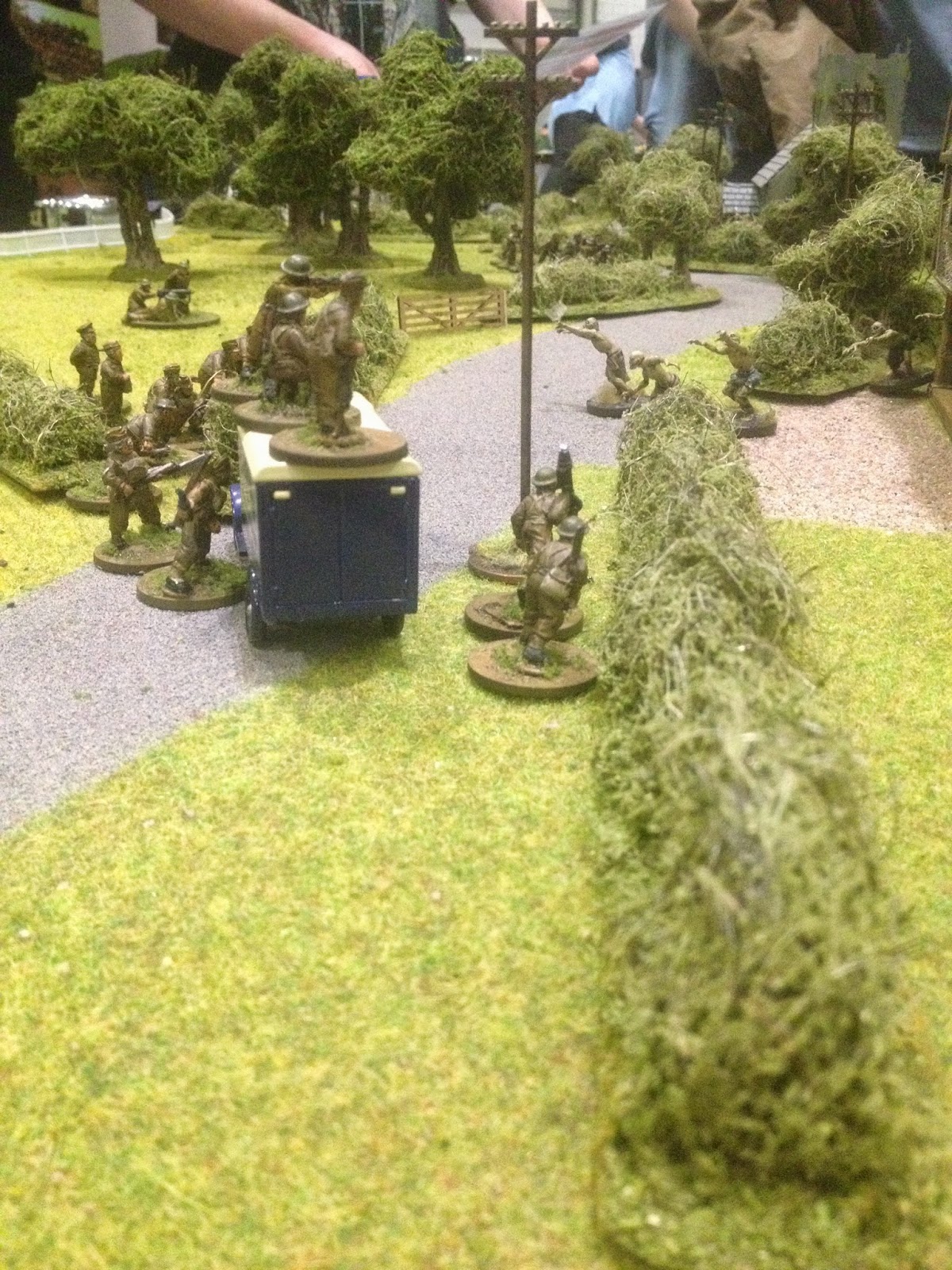 End result, 2 wins for the lads, 2 for Skorzeny and the undead, and the last game was undecided at closing time. It did seem to all crucially depend on whether the Home Guard could avoid getting into melee with the zombies for long enough to someone with line of sight on Skorzeny and kill him. Once it got to the point where Home Guard sections were retreating before dozens of zombies, it was generally all over for Walmington Parva.

Also? Keeping a fire team, or preferably the Vickers, aimed up Church Road seems to have been a really smart move. Zombies and large amounts of .303 ammo do not mix well.

Clear up time. I missed a trick big time here, since, by the time I got down to the car, the nice bloke at the entrance to the queue for the loading ramp pointed out that I was in for a 2 hour wait. So we wound up loading out through the stairs down to the car park, which I suspect is where a sizeable fraction of my 7 miles of walking ended up getting used.

Salute veterans: what's the trick here? Bail out to fetch the car ahead of the close?

Despite that, we made it back to Peterborough by 8:30. My thanks to Carl, AndyM, Grahame and Chris for working the game, everyone else from the club and elsewhere who came and said hi, and to Rob (whose cousin rather inconsiderately got married the day of Salute) for painting the zombies, building the graveyard and in fact coming up with the game in the first place.

See you next year!
Posted by Mike Whitaker at 14:19