Labels: end of year report, thoughts
Let's see if I can do better than this year, mm?


And then the 'things I'd like to do if I have time':
Not involving lead. plastic, MDF or craft foam:

Labels: end of year report, thoughts
In which we all get to have a good laugh, like as not.

So: here's the plans from this time last year:


Hey. Actually that's not bad. Proof that if I don't overcommit, things don't go so badly!

When you add to that the fact that I also painted and based 18 assault boat sections of 15mm US 29th/1st infantry for Bloody Omaha, which is 27 figures a section, for a total of (dear Lord) 486 figures, along with 6 landing craft... (Yes, Robert, I'll get you some photos to Vis Lardica before the end of the year!)

Compared to that, the four platoons of US paras are going to be trivial :D
Posted by Mike Whitaker at 09:00 4 comments: 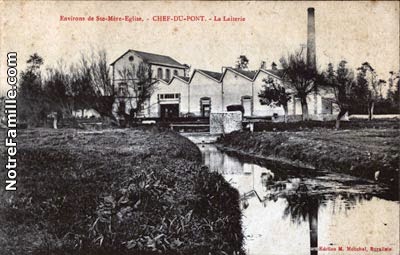 The first part of the project, therefore, is going to be to build the creamery, probably on an A3 or so piece of MDF. Watch this space!
Posted by Mike Whitaker at 09:30 1 comment:

Labels: battle report, chain of command, club, home guard, WW2
Having finished with the club's Dreadball and WAB campaigns, and having had a couple of weeks break with things like Black Powder, it was definitely time to break out the Home Guard again. This was made even better by the fact that Pat popped out a fourth final draft (we're getting there, honest) of the Home Guard lists, and I finally got round to painting some of the 3D printed accessories he sent me over the summer.

One of the major changes is that, since the advent of the CoCulator, it's been much easier to balance up the lists: in the past I've found that the Home Guard tend to suffer greatly at the hands of most lists due to being woefully (and historically) under-powered. Draft 4 has the early war HG worth a platoon rating of -12, which lends itself to a lot of shopping for... stuff. 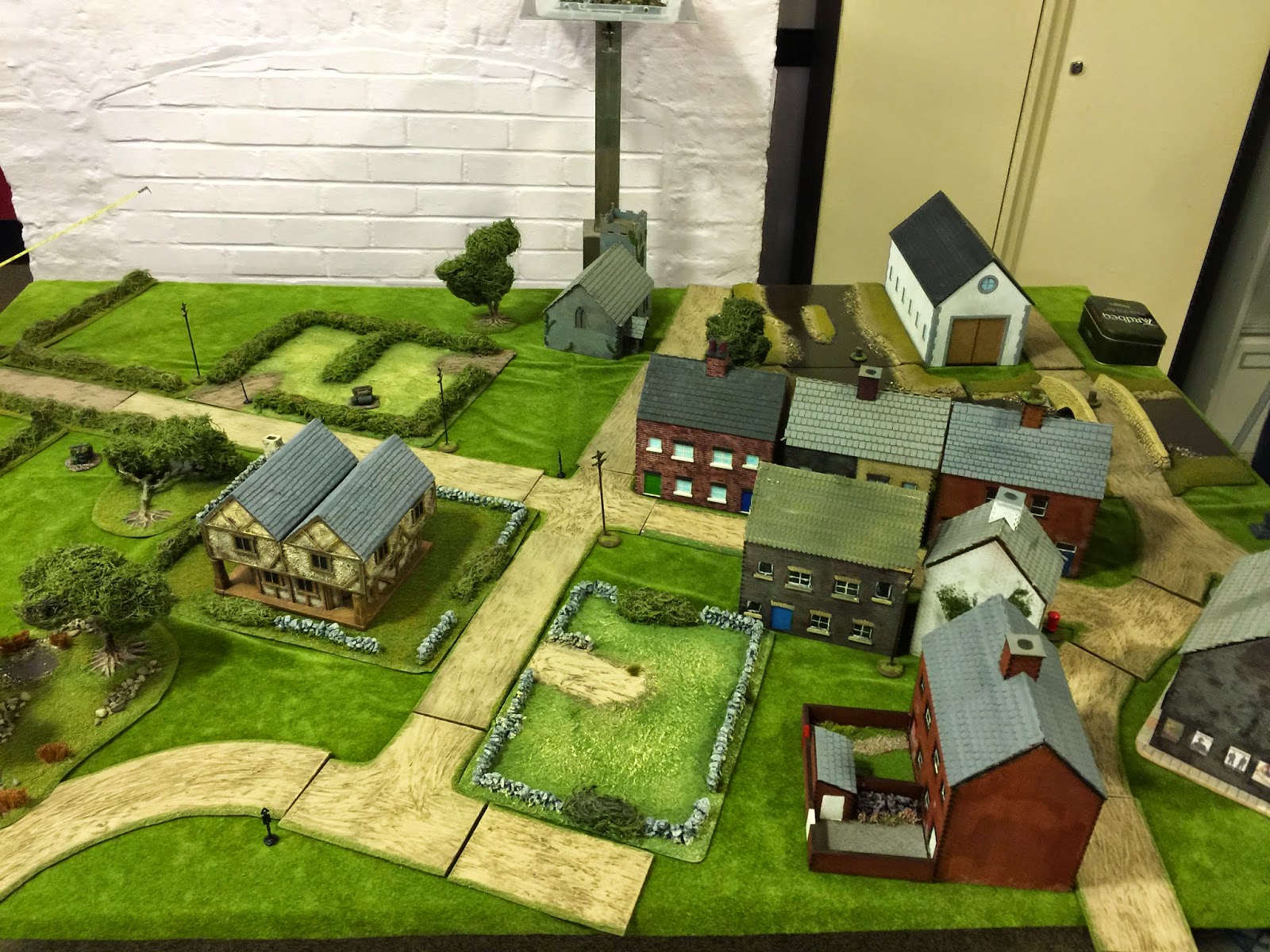 Anyway: we broke out the scenery from 'Dead's Army', courtesy mostly of Warbases, and built a nice East Yorkshire village with a river bridge for the Home Guard to defend. We used scenario six from the rulebook - "Attack on an Objective". Gary brought his early war Germans (+4 rating) and Carl took the Home Guard. The roll for supports was a double six: 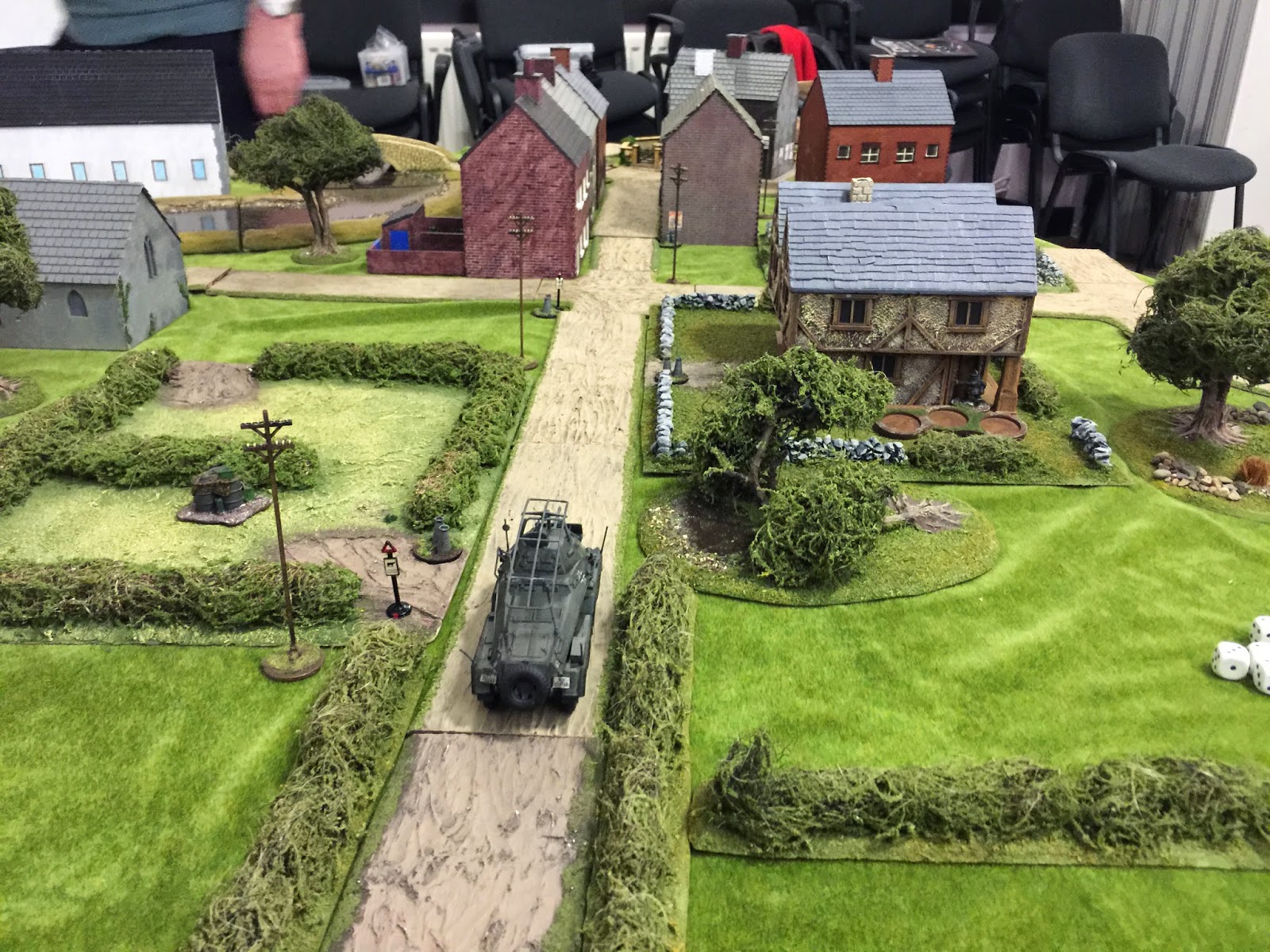 Effectively Carl's extra section went to man the Lewis gun and the 18pdr. 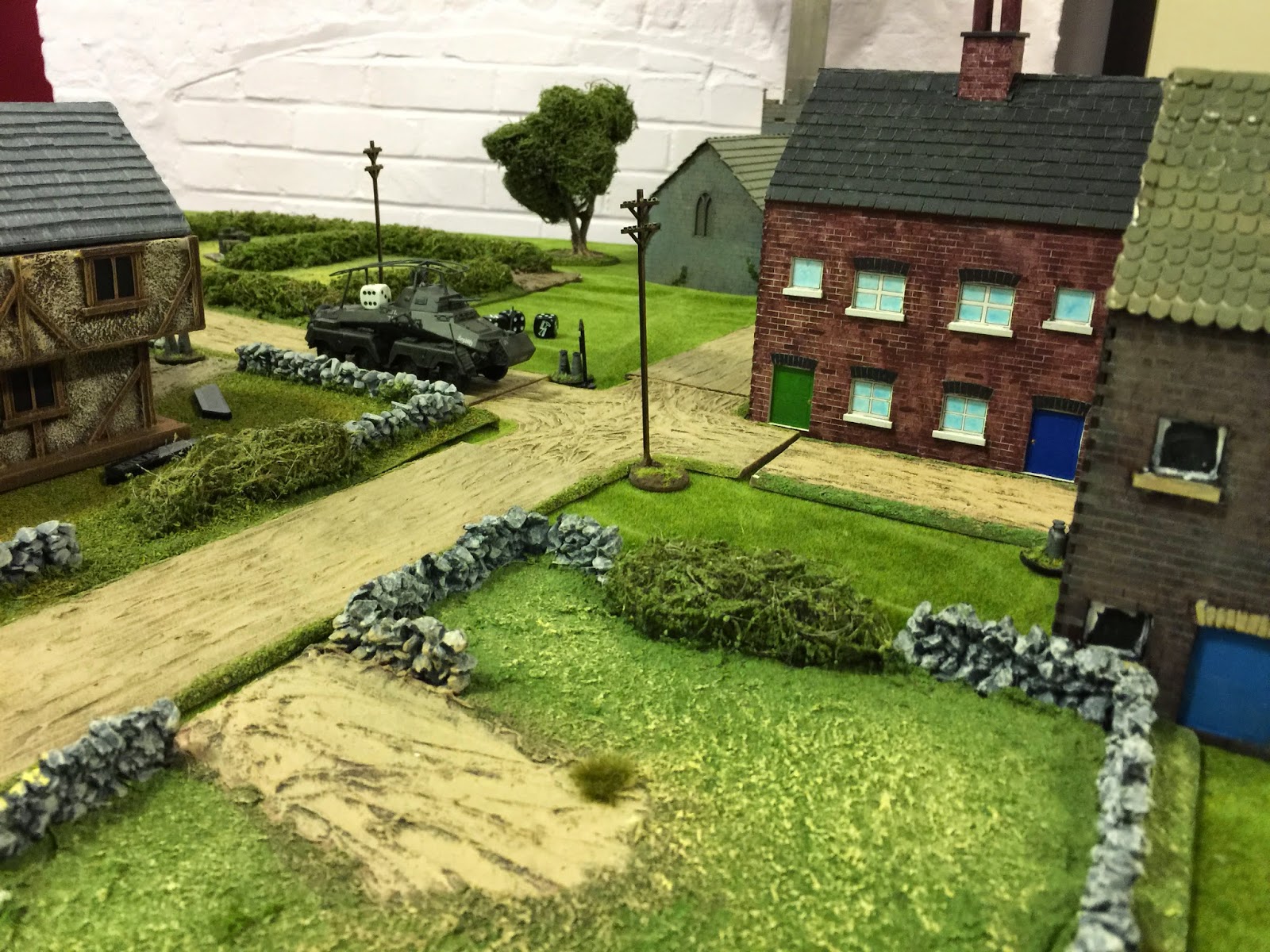 This is the first CoC game we've played in a while. so as usual, we were a bit rusty and slow. The patrol phase was chiefly characterised by a race for the church, which Carl won. Once we started Gary pushed down the road with the 231, and deployed a couple of infantry sections near the church and the farmhouse: he was somewhat chagrined when Carl deployed a section in the White Horse pub with LOS on the milk churn mine at the crossroads, and... blew off the front wheel of the 231! (Gary was probably more chagrined than most at this as he's supposed to know about IEDs in Real Life.)

[Game mechanics wise, I had Carl make a to hit roll for the mine, to reflect timing etc of the detonation.] 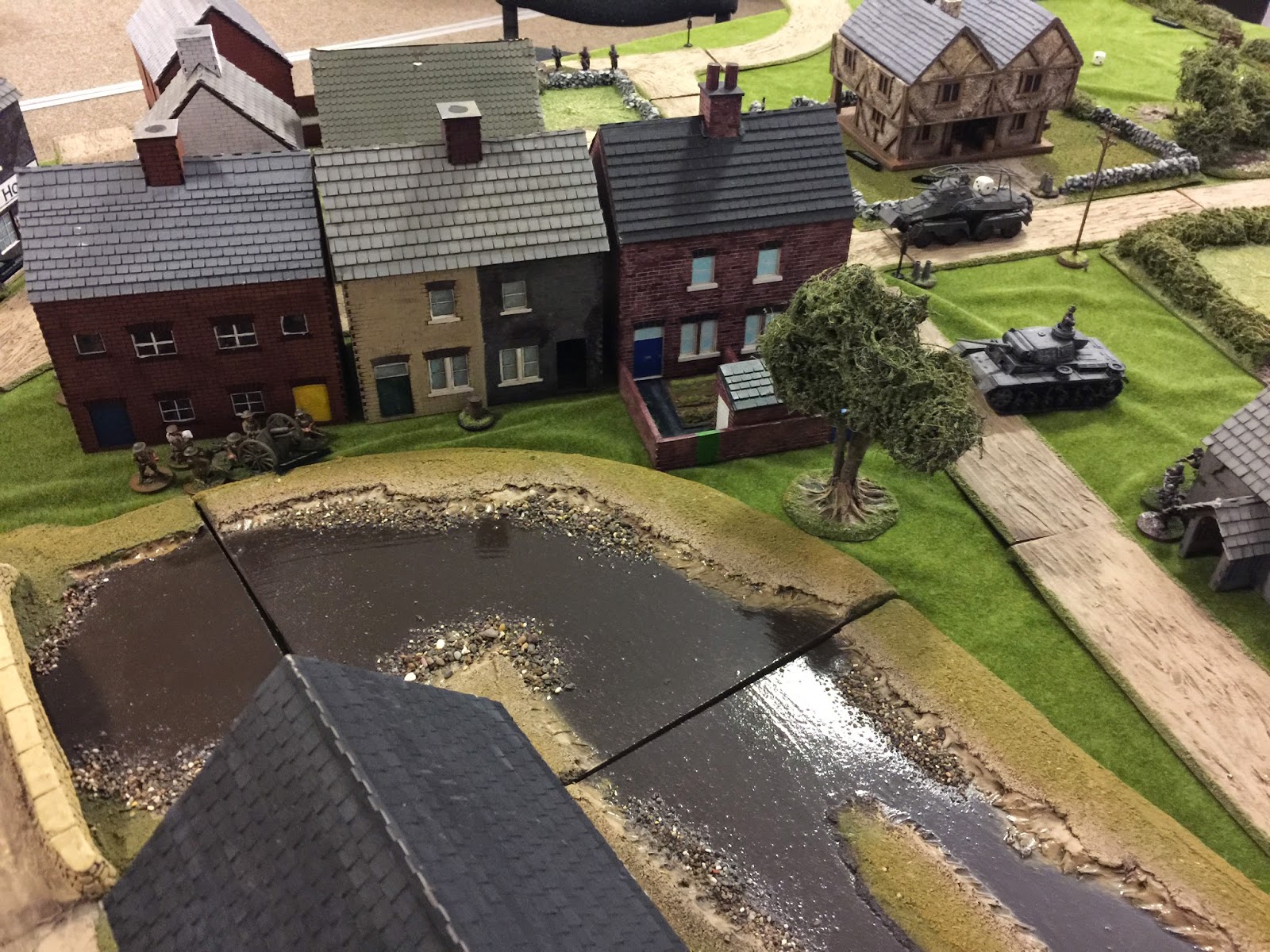 The Panzer III wisely chose to skirt across the fields towards the church, which Gary managed to capture before Carl got to deploy anything n it, and also denied the Home Guard the jump off point on the board edge next to the church.

In the meantime, the Germans pushed ahead on the right flank, round the backs of the houses on High Street and Bridge Street: they were met by some accurate fire from the Vickers in the window of number 1 & 3 High Street (the green and blue doors). 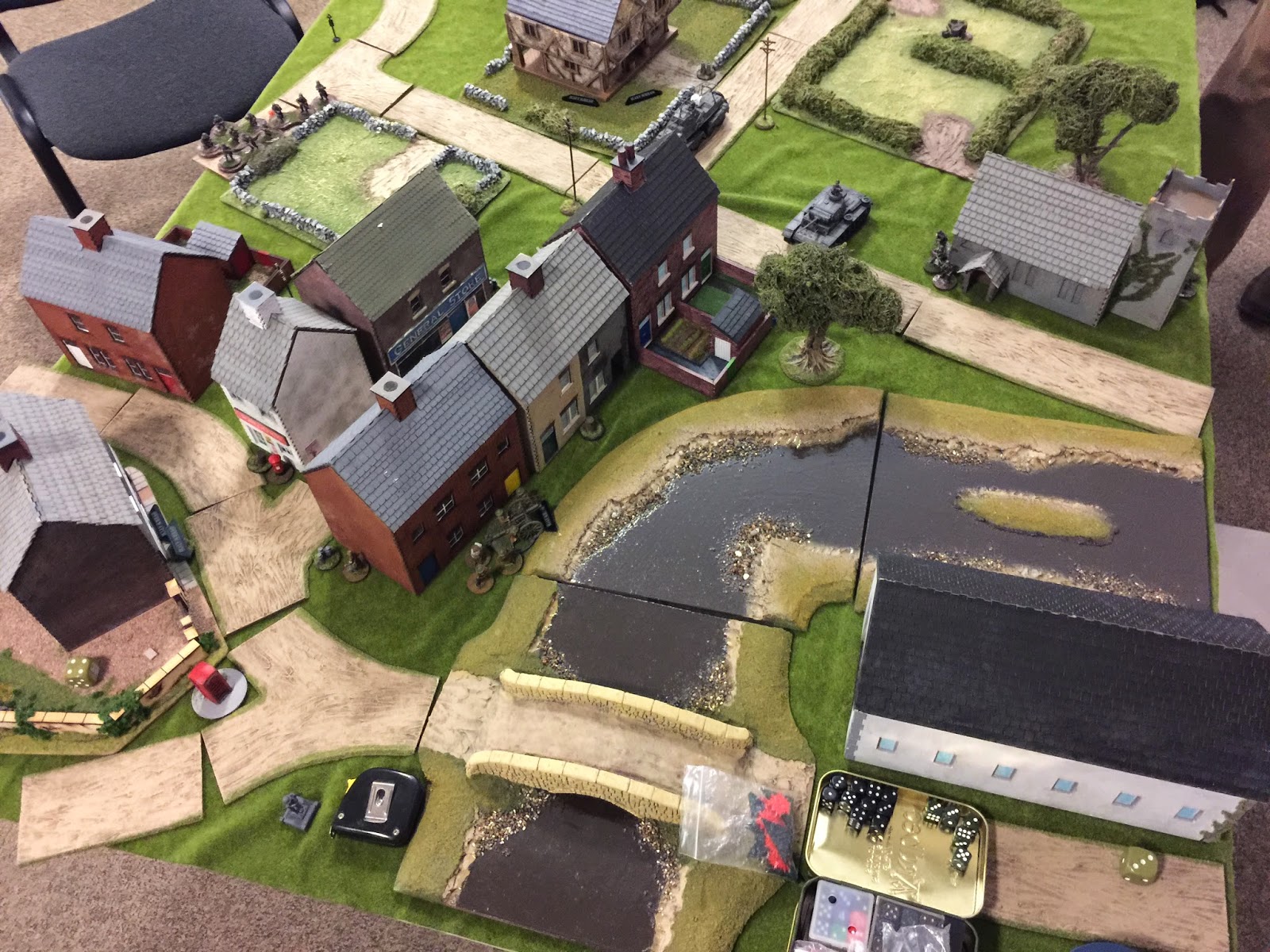 Somehow they survived a couple of phases of fire, sneaking round the back of number 1 Bridge Street and aiming for the White Horse. Meanwhile, the Home Guard had wheeled out the WW1 gun, and taken several shots at the Panzer III. And, pretty much, missed.

Unfortunately, the Panzer III and the German mortar didn't miss, and in about 3 phases the gun crew were wiped out.

That's about where we had to leave it: both sides still had a section to deploy, but the Panzer was probably going to be able to wade across the river and take the bridge.

Lessons learned? Much better balance. And the Home Guard need to take every anti-tank device known to man - with hindsight, Carl and I agreed they should have ditched the second set of milk churn mines, fun though they were, for three List 1 Sticky Bombs, one for each section.
Posted by Mike Whitaker at 15:25 3 comments:

Labels: buildings, kickstarter, scenery
As you may recall, the club picked up a huge pile of MDF scenery from the Commission Figurines Kickstarter. We finally got round to putting some of it together for our Bolt Action Tournament in early December: check this out - the Steam Mill in pre-painted 28mm MDF...

A merry Christmas to all my readers.,..

Labels: administrivia, i atent dead, secret santa
The wargamers Secret Santa delivered me a box of 15mm PSC Churchills - to the mystery giver, thank you very much - they're on the painting pile for 2015! Hopefully my recipient is as happy with his gift, and once again thanks to Ian and Catherine for organising it.

I think I'm now all caught up with the world outside wargaming, which is nice - making a conscious choice to quit a non-wargaming hobby responsibility that was just getting me seriously down and infecting me a global case of the 'don't-wannas' seems to have been a very wise move.

Currently plonked in the comfy armchair with a mug of tea (and an enthusiastically helpful three-legged black kitten) awaiting breakfast pancakes (a Saturday/holiday morning tradition hereabouts) contemplating where to start on the wargames and blogging to do list. This post, methinks :D