Labels: AWI, battle report, meeples and miniatures, sharp practice 2, too fat lardies
On Tuesday I was picked up by my partner in podcast crime, Neil Shuck, at a very rainy St. Albans City station and transported to Lard HQ for an introduction to their latest ruleset, Sharp Practice 2. 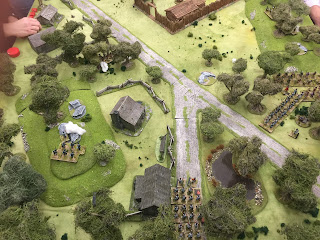 Rich and Mike Hobbs were already there setting up a table for a game set during the War of 1812 with some of Mike's rather pretty figures. I got roped in (as an official guest) to command the British, aided by Elton and Dougie, our mission to capture Fort Knightly from those dastardly American fellows.

My command was the three groups of British line, along with some lights, while Elton had the Canadian militia (who turned out to be very useful) and Dougie some Indian allies. Leader character names were scribbled up on a blackboard (which I forgot to photograph!), and, as ever from Rich, were a combination of the silly (Indian leaders Wart Knee and Red Barrel) and the whimsical. 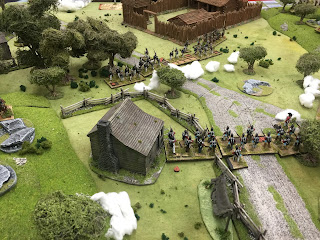 I began by marching the British up the road in column - what can I say, I'm a traditionalist! Once there was space (and the Sergeant had forcibly prevented a couple of the men from being over-familiar with the locals), we deployed into line just as the Canadians did, and found ourselves facing an American line. Which we proceeded, over the course of several turns, to pound the living daylights out of with musket fire. 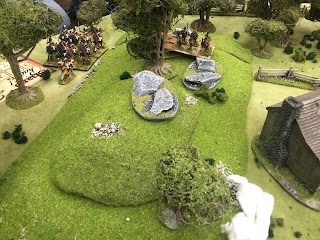 In the meantime, the Indians on the right were slowly working their way along a ridge, and my lights were getting hit in the flank by some Colonial chaps. Poor Neil, on the other hand, was starting to think his activation chits had been left out of the bag (Rich had to prove they hadn't), as his cavalry didn't move for ages. Finally, though, they did, and began a sweeping move round the right that eventually led them into the rear of my line, despite Hobbsy pointing out several times they were only scouting cavalry and not much good in combat. (And, it should be added, Rich encouraging him to charge....) 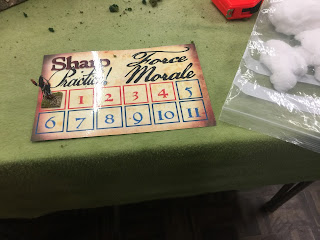 To be fair to Neil, I rolled some absolutely ridiculous dice, hitting 10 times on a 4+ on 13 rolls. Most unlike me, and the cavalry were not at all happy about it.

Didn't do much for the American's already shaky force morale, either...

That was pretty much it - a very fast paced, fun game with some interesting mechanics and command decisions. If you want to hear Rich talk about it, check out episode 167 of the podcast - the rules are out on the 23rd of April, and you'll be able to preorder from the Too Fat Lardies site sometime soon, I'm sure. I know I will be.

Thanks to Rich, Nick and the rest of the Lardie crew for making us welcome, to Hobbsy for the figures and the work he's putting in on the Sharp Practice 2 War Of 1812 supplement and to Neil for not only picking me up from St. Albans station but driving me home at midnight.