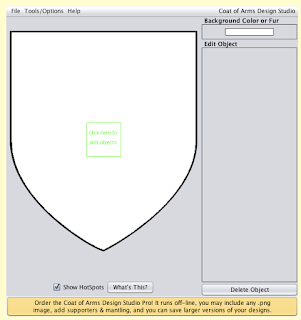 Some of you are possibly wondering what I'm using to generate the example shields in the preceding articles. Well...

It's a very nice little web app by the folks at Inkwell Ideas called Coat of Arms Design Studio - it requires Java, which may mean a little downloading, since the yawning great security hole in some recent versions has stopped Apple (among others) from enabling it by default.

Once you've got it working, the free version is pretty neat - you can place almost any kind of charge from its library on any background, and then export the results. The pay version adds the ability to import images, and a few extra tweaks.

If you think you've run across Inkwell Ideas before, yes, you have - I supported their Kickstarter for their Cityographer mapping product a while back.

Which just leaves the answers to last time: if you recall I asked you to identify three partial blazons and where they came from.