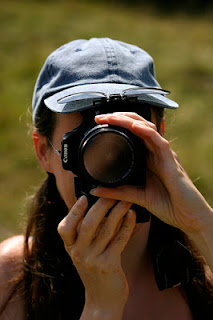 [Leaving today's post a little late due to visitors :D However, definitely not going to break the streak, so....]


photo- of or related to light;

-graphy [...] a process or form of drawing, writing, representing, recording, describing, etc.,or an art or science concerned with such a process.

If you like, what we're talking about, then, is drawing or recording with light. And indeed, the key thing about taking a photo is controlling how much light reaches the film (or in this day and age, the camera sensor), in order for it to receive the amount of light it needs to record an image. Point and shoot cameras make this surprisingly easy by virtue of making some clever compromises, but it helps to understand the nature of the problem to use a point and shoot, or a (D)SLR to best effect. There are four major parameters you can control to a greater or lesser extent while taking a picture, depending on your camera. The art lies in working out which ones you can compromise on and still get what you want.

At a very simple level, a camera consists of a lens and a shutter that opens for a set amount of time to a given width of opening to allow light on to a film or film equivalent. The things you get to control within the camera are the time the shutter is open for (the shutter speed), the size of the opening (the aperture) and how responsive the film is to light (the film speed or ISO rating). The first two together are called the exposure.

The longer the shutter is open, obviously, the more light will reach the film. [Oh, screw this. It's a digital world. You know I mean sensor, so let's use the word!] Easy enough, but the compromise is that the longer you leave the shutter open, the more prone you are to camera shake. However... we're not photographing something that moves, so there are some easy solutions to this (like, say, tripods!) which I'll cover in a later post.

Next time, we'll put some numbers on these, and explain how they interact, and maybe a little of how point and shoot and phone cameras get round the problems.

Oh... the fourth thing you can change? The actual amount of light on the scene you're photographing! :D But that's a whole other story.
Posted by Mike Whitaker at 22:27