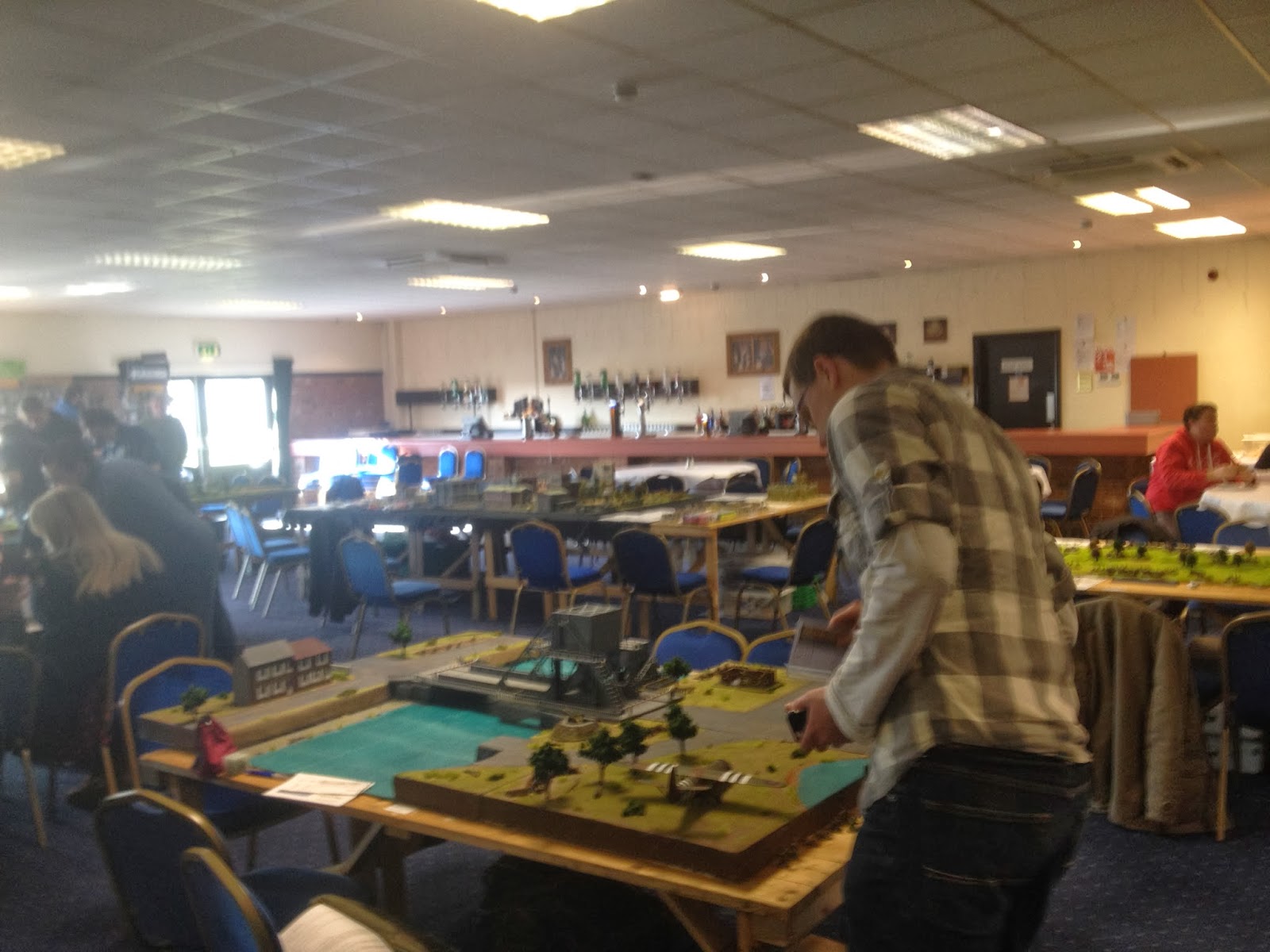 Getting up in time to set off for Hammerhead at 7.30 was not going to be a problem, given it was going to be, relatively speaking, one of my later rising times this week. You can therefore, I'm sure, imagine my ill-concealed and unbounded joy and delight when I was paged by one of work's database servers at 0345.

Breakfast (in fact, the whole day) contained more caffeine than usual, but we did get to Hammerhead's new venue before 0850.

Initial impressions: the main room (the Cedric Ford pavillion at Newark Showground) is bigger than the main room at Kelham Hall, at least in the horizontal dimensions. I'd reckon the overall space Hammerhead (and other shows) use at Partizan is generally bigger: at a guess, about the same number of games (maybe a few fewer) but definitely fewer traders. The organisers had changed this year, too, from COGS to the Forest Outlaws club, with additional sponsorship by Kallistra (I gather Paul from Kallistra is a member of the club). There were probably more games using Hexon terrain in one place than I think I've ever seen before!

There's a bar along one edge, also serving food. The sausage sandwich was decently generous, and the  lunchtime jacket potato filling and really rather good. Prices were about what you would expect from such a venue (£3.50 or so for the jacket spud), and the tea... was actually several stages better than 'drinkable' and most welcome. Can't comment on the beer, much as I was gasping for one, as I was driving. 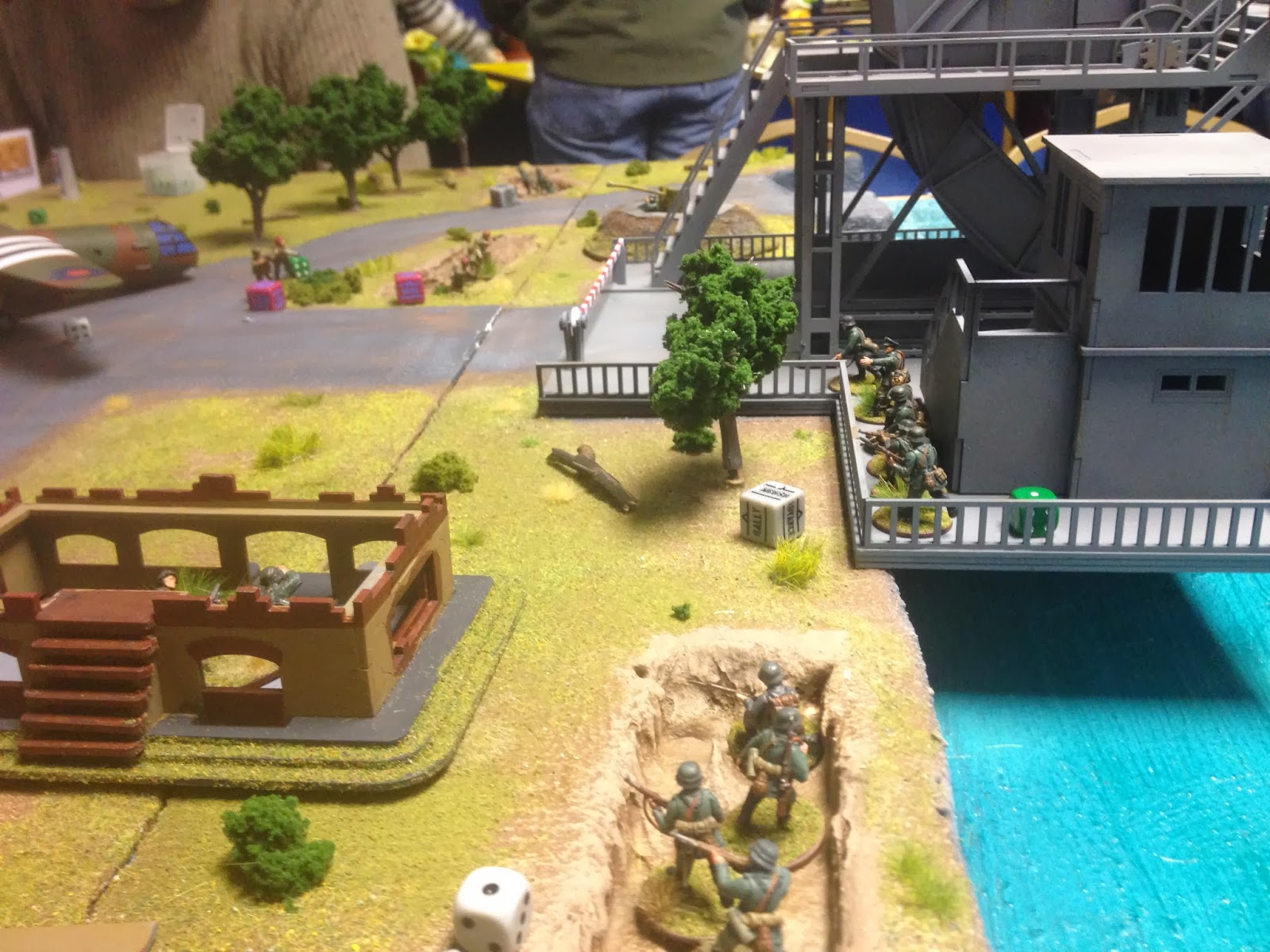 Well, to be accurate, our games, as Mark from our club managed to slip in his rather fabulous Pegasus Bridge Bolt Action game using the Warlord bridge model at the last minute, and had a decent crowd round it (with help from those of us not running the other game) most of the day.

We, on the other hand, were much less sensible.

Permit me to introduce the first skirmish in A Very Tiny Civil War, The Battle For The Patio, featuring Loyalist and Revolutionary forces of garden gnomes with allied small furry animals (a rabbit and a squirrel), featuring cameo appearances (on the random events table) by a cat, a swarm of ants and some bird droppings. A simple grid based movement system (hey, you have patio flagstones? Use 'em!) with rules, as ever, on one page of A4, and game design and silliness, as ever, by Grahame and Chris. 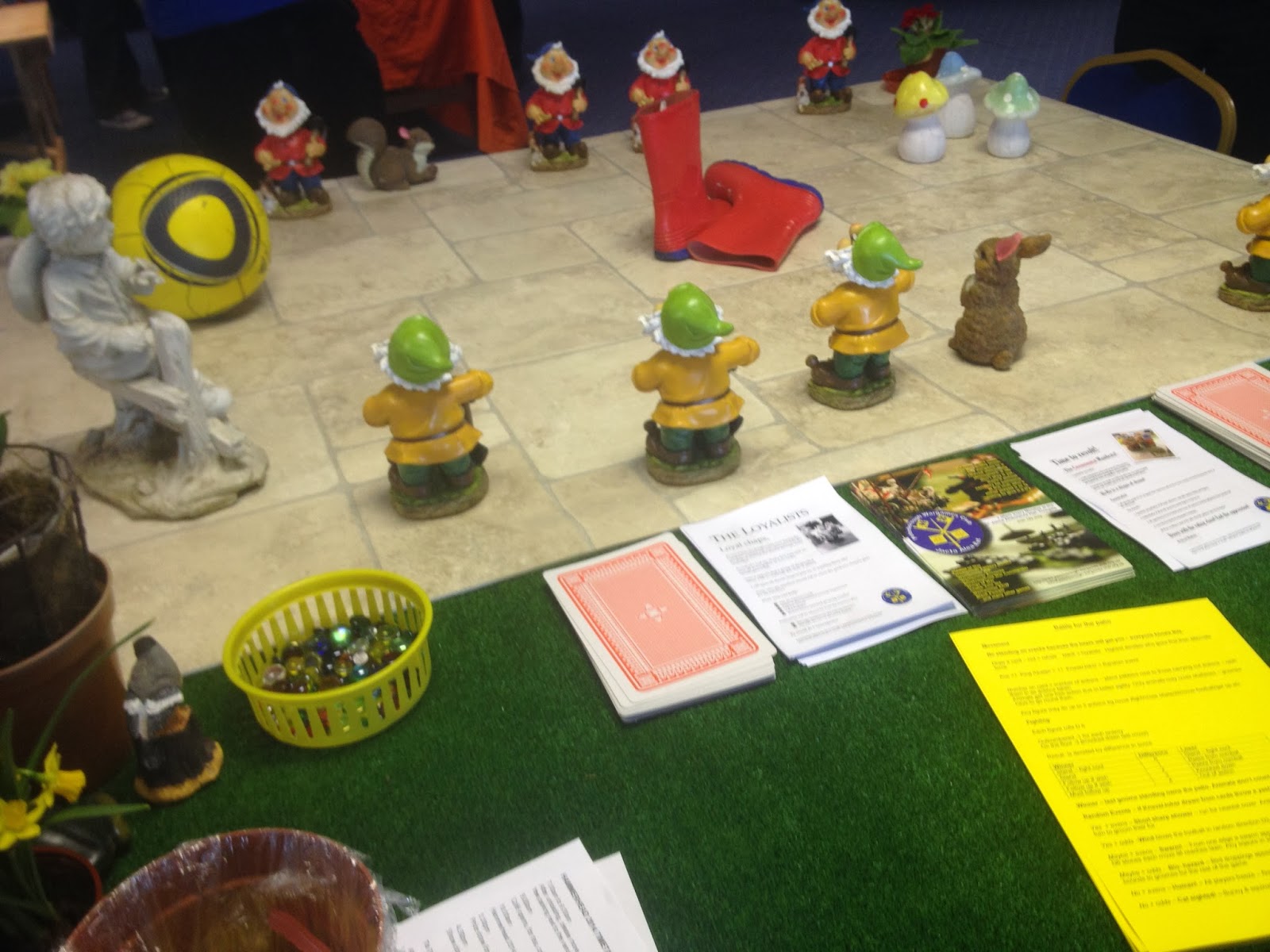 We had plans (encouraged by the late Tony Barnes) to do some very silly things at Kelham this year, had the show been there, of which the sanest involved Zeppelins and the balcony. In light of the venue change, we went for differently silly. I'm pretty sure, but open to contradiction, that this is one of the first 1:1 scale games at Hammerhead :D

We didn't win (for once!). But who cares? :D We had fun, and it was clear that the considerable number of folks who had a go did to. It's a test of how warped our games are what the average punter's first reaction is: we like to aim for a double take and a slow shake of their head as they walk past as a good working initial benchmark. :D 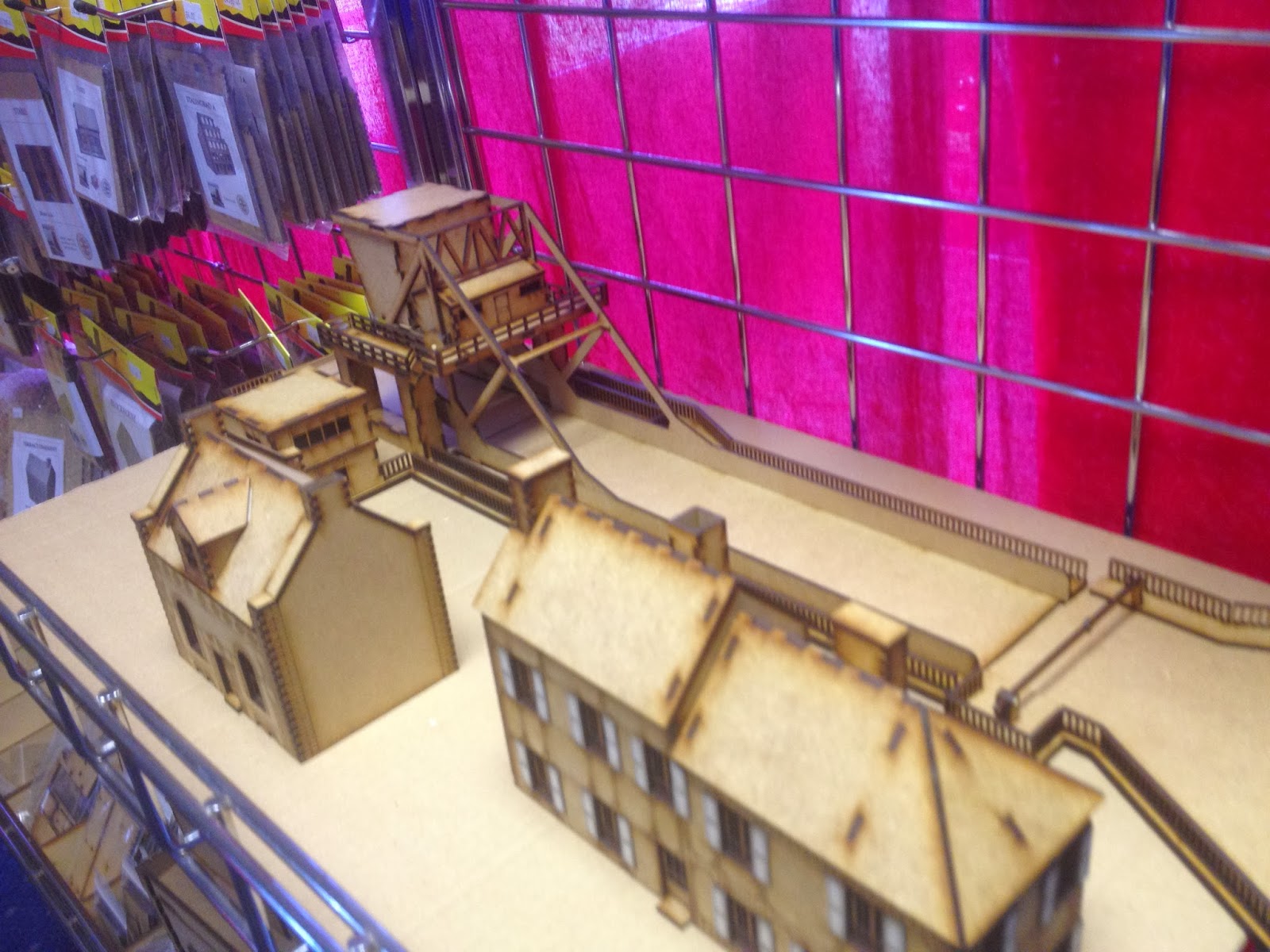 I spent more money (with our Treasurer's help) on the club's behalf than I did personally this year - we hit Last Valley hard and early and stripped Andy's stall of what felt like about half his trees, as well as a stack of buildings from Warbases (while admiring their 15mm Pegasus Bridge - yes, them as WELL as 4Ground) and some 40K scenery from the bring and buy. Some of it's for the scenery cupboard, some for our Salute game. For myself, I went with the intention of either a) picking up some Crusader 28mm early war Fallschirmjäger, b) crossing a few more items off my 15mm wish list or c) picking up some 15mm NW Europe buildings. In the end I went with b), collecting another company box of Battlefront US 29th Infantry, a pair of Bren carriers and a box of PSC Cromwells (and on updating my wish list, I'm annoyed to notice I passed up on 2 M7 Priests, thinking I didn't need them!)

Other than that? Spent some time admiring a wide range of games, a fair bit of time saying 'excuse me' (this suggests the show was decently packed) and had several chats with Neil from Meeples.

Many thanks to the Forest Outlaws for putting on an excellent show - to those who decided not to come because of the changes? Your loss. You missed a treat.