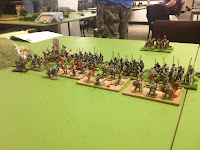 Andy Hawes has played Dux Bellorum a few times, notably in a big demo game at this year's Salute for which he and his co-conspirators deservedly won an award. Monday night saw us try a basic 32 pt a side battle, with, predictable, Andy's Romano-British against my Saxons. 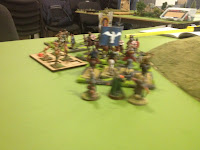 Given it was my first game, and I'd only skimmed the rules on Kindle the previous night, unsurprisingly I lost!

Very much a classic warband vs. shieldwall grinder - on my left, my Companion cavalry and Andy's beat each other to a standstill, on the right I somehow managed to lose a cavalry duel, and as a result one of Andy's units of horse rolled up the centre, where four warbands were pounding four units in shieldwall. 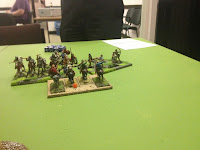 Pretty good fun, though: for that scale of combat it plays better than WAB - less random, and more convincing, I think. On the whole? Still prefer Dux Britanniarum, but then that's partly because I have a lot invested in the campaign!