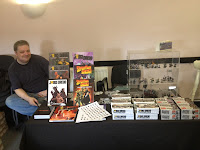 Just got back from the club's Judge Dredd tournament - sadly not a great turnout, but we were graced with the presence of Mongoose supremo Matt, who brought along some lovely shiny new toys, including some pre-release figures for us to admire from the new partnership with Warlord. (And yes, I'll be buying several of those!)

We decided, by the way, while admiring Matt's goodies, that the collective noun is an 'overspending' of wargamers. Such candidate 'lines to the wife' were offered as:

Anyway: the morning was a straight tournament - 4 games each, 500 pt forces, and a trophy for each of the good guys (Justice Dept) and bad guys. Winners were:
I'm quite pleased to note that after a bad start (two comprehensive defeats) my Judges rallied to come second among the good guys! 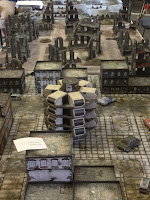 In the afternoon we had a single big sprawling battle for Mega-City One. The Judges each got an extra 300 points of reinforcments each, plus Judges Dredd, Anderson and Giant and a Holocaust Judge. The bad guys got 500 points of zombies plus zombie master/mistress each, plus... erm... Mean Machine from the Angel Gang, and the small and trifling matter of Judges Fear, Fire and, um, Death. 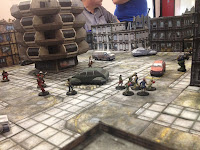 Highlights: definitely Judge Cal (in our campaign, he's still a good guy, though for how much longer who knows) successfully making an arrest check on Judge Fear (cue much consternation)... and a combination of several Judges knocking Judge Fire down to 3 hits before my Psi-Judge Silvas arrived with Psi-Judge Anderson riding pillion on her Lawmaster. A blast from the big bike's twin cannons took Fire to zero hits, causing him to morph into his (2 hit points until he possesses someone) spirit form, and then everyone's favourite blonde Psi Judge proceeded to Psi Whip those two hits from him (and then shoot a passing mutant in the face for good measure), all without leaving the back of the bike.

Sadly about there we ran out of time, with Anderson and Silvas facing down Death and a bunch of zombies and mutants, with Dredd and the remainder of the good guys quite a way away. Pity, really, as it was just starting to get juicy!
Posted by Mike Whitaker at 19:23