Labels: dark ages, dux britanniarum, godric, lavinia, series, to britain's shores
[I figure this morning's post doesn't really count. So here's part one of the in-character side of Monday night's first actual battle (rather than raid) in Andy and my Dux Britanniarum campaign. Enjoy. Especially the second narrator.]

I swear, you could hear Aelfric's voice the other side of the Humbre back in Petvaria. It's not that he's shouting as much as he knows how to make it carry.

"Today, we bring the British to BATTLE!"

The roar from our assembled warband damn near blows me off my feet. We're on the down side of one of the wooded hills that dot the region of Linnius, and Aelfric (with a little help from the scop Oswulf) has them more than ready to go up against the British. He's let it be known he's looking for allies, and a small group of men from one of the lands to the West, who have been moving from steading to steading looking for chances to take on the Britons, have joined us, led by a wild-eyed, huge bull of a man called Cormac. I hope to Odin they scare the British, because, by Thor, they worry me!

"What do you want, Saex?" It's one of their leaders, from near the top of the hill. I'm not quite sure at this distance, but it could be that Geraint. "Caer Lind Colon is well defended. It's not yours for the taking."

Adric laughs. "Send us your champion, and we'll see..."

He claps me on the shoulder. "Ready?"

What in Hel's name am I supposed to say when my Lord asks that question? No? 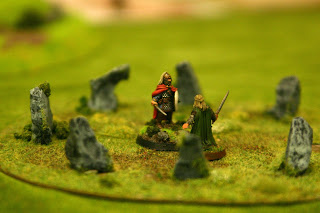 Me and their champion step into the stone circle. He's about my height, a red cloak, shield with a symbol of their Christ-God and a sword over mail. I salute him with my own blade. "I am Godric, champion of the Drohtin Aelfric, the right hand of the Young Wolf." My mouth is oddly dry. "We fight to the death, or till either calls quarter or sets a foot outside the circle."

He returns the salute. "Bedwyr of the swift sword, son of Emrys of the Saxon Shore, slayer of Franks, Goths and Burgundians, protector of the legacy of Rome..."

I can't resist goading him, just to set him aback and not thinking straight. "Not doing a very good job of that last, are you?"

It's an ugly fight. I go in fast and hard to try and catch him off balance, but he's a wily fox. In other times, other places, he'd not be bad to have at my back, truth be told. He gets the edge and keeps it, nicking me as often or more so as I do him, backing me up against one of the stones and using his shield as a weapon as much as he does his sword.

In the end he catches me with the rim of his shield with an outward sweep that jars my wrist and knocks my sword arm aside, and brings his own up to swing down. And that's the point at which I start to realise I'm getting too old for this game. I sidestep, forcing him to change his hacking downswing into a long cross cut or risk smacking his blade into the stone as he steps forward. Without a pause, I risk a very quick glance behind me and take a half pace back.

The blade passes about a handsbreadth from my chest, and there's an audible groan from our lads as they see where my back foot is. I smile at him. "Yours. Well fought." He's at best sprained my wrist, and at worst broken it, and it hurts like the Christian Devil himself, but I'm not going to let on.

"Let me see." I'm probably the only person apart from Lord Aelfric who can get away with bullying Godric, but it's clear that wrist is hurting him as he walks back to our lines, so I set my bow and quiver down and hold out a hand to him.

"Stop fussing," he growls, but offers me the wrist anyway, gingerly. "No time for that."

Ecgwine claps him on the shoulder, laughing. "Let her. She will, come what may, and you know it."

Godric hrmphs. "And which of us is the man Lavinia has under her thumb, mm? Not me."

"It won't take long." I prod and push at it a little, watch his reactions, note when he winces, and as importantly when he doesn't. I've done this for ages with everything from Wulfhere's prized hound to old Martha's nephew after he came off a horse, and I can tell... "Not broken. Sithric? One of those strips of cloth."

Sithric has a bag with a few things to tend wounds that I gave him to carry, him and the other two lads, and hurries to hand me one. "This do?"

"That's fine." I smile, which I know will be reward enough for his teenage blood, and set to quickly strapping Godric's wrist good and tight.

Aelfric eyes me up and down after the lass has tended to my wrist, quirks a questioning eyebrow, which I take as the unspoken question of whether I'm fit to fight. So I just nod, and he nods back. "Good."

Beyond him, I can see the glitter of spear points through the trees as the main body of the Britons hurry towards us. "Here they come."

Aelfric nods. "Good." Raising his voice. "Ecgwine, Beornwulf - to the foot of the slope. Hold them there, don't attack till we do. Hearthguard, with me." He grins at me. "British. They're too fond of that wall of shields of theirs. They'll try and defend the hill, even if it isn't their best option."
Posted by Mike Whitaker at 19:46