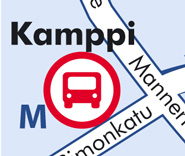 I've been thinking, there being not a lot else to do when you're awake at 3am because your body clock thinks it's 10am...

Mostly, I've been thinking about why I do this blog, which was in part inspired by something I read yesterday on the Helsinki Bus Station theory. What, you might ask, is that?

Well - it's a metaphor for creativity and art. The article summarises it better than I do, but in a nutshell: Helsinki bus station has a number of platforms, and all buses from a given platform pretty much share the same route as each other for the first bit of their route. This is kind of like the first steps in blogging, painting, whatever: you find inspiration in 'I wanna do something like so-and-so', but for the first few stops you think 'but everyone's doing this / I'm so unoriginal / I suck...'. And if you're foolish, you go back to the bus station, and you pick a different platform, and the same thing happens...

The secret is, to stay on the bus. To keep on doing whatever it is you're doing.

Because eventually the routes diverge. And you find you're on your own bus, going your own way, for all it may have started out like several others.

There are some stupendously brilliant figure painters out there. I'm not one of them, and (given I have next to no depth perception, eyes that make in-store opticians go 'what????', and am generally not the tidiest or neatest of painters) I never will be. I'm not by any means the best tactician or strategist: a look at the results of the last two WAB GT's should demonstrate that pretty quickly. And so on. And there's a part of me thinks 'who the hell do I think I am, trying to teach my readers that include people like RayR or AndyH how to paint horses?'

I think I figured it out from a comment on one of my Analogue Hobbies painting contest entries (which I still submit with a degree of trepidation! - 'here, have an entry. it's not very good'):


I really like how you have described the process. For wargaming standard (my standard) the AP products are really impressive. I am still developing my technique with them, but I have learned a lot from your post as well.

See, not everyone's Kevin Dallimore. Not everyone's Martin Gibbins, or Sidney Roundwood. Sure, we all would love to be. But it's a surprising truth of the universe that you don't have to be that good at something before you acquire your own style, your own way, and you actually have things you can do that not everyone can do as well as you can.

So, no, if you've read this far, I'm not fishing for compliments and affirmation. I'm Joe Average gamer, looking at the figures and terrain my friends and opponents produce and wishing I was that good, but taking pride in the fact that I can put a painted army on the table that I'm not ashamed of. And maybe the thing I can do, because I do seem to have a knack for writing proper, helpful, joined-up English, is to help other folks, the ones who like me just wish they were Andy Hawes (stop blushing, mate!), figure out how to do that, and things like that, too.

Welcome to Trouble At T'Mill. Hopefully, there's something here you can learn from.